The King meets in Qatar with Spanish companies

The King, who traveled to Qatar this Wednesday to attend the first match of the Spanish team, has extended his stay and this Thursday held a meeting in Doha with a representation of Spanish companies that work in the emirate to learn first-hand about the state economic and trade relations between the two countries. 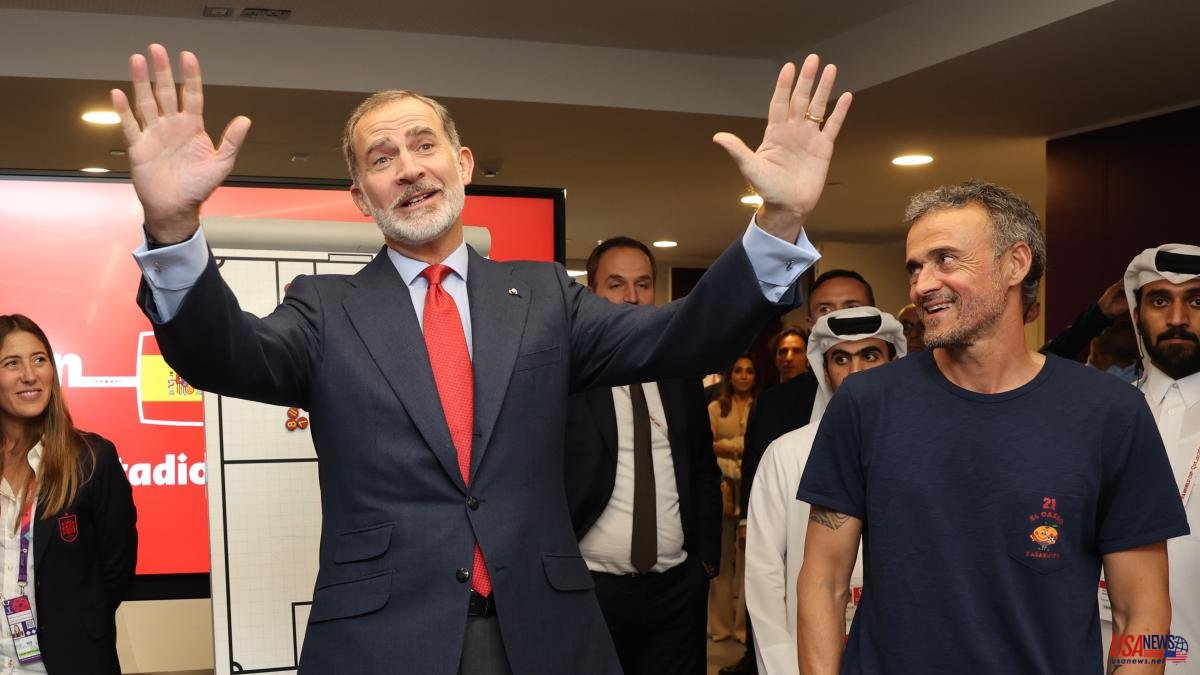 The King, who traveled to Qatar this Wednesday to attend the first match of the Spanish team, has extended his stay and this Thursday held a meeting in Doha with a representation of Spanish companies that work in the emirate to learn first-hand about the state economic and trade relations between the two countries.

The King's trip to the World Cup venue, like the other official trips, both to attend the match that pitted Spain against Costa Rica, and the subsequent meeting with Spanish companies, has the endorsement of the Government. Felipe VI represents the Spanish State, as the President of the Government, Pedro Sánchez, recalled on Wednesday, although on this occasion, the Executive has decided that the government representation should be low profile and the King has been accompanied by Secretary of State and President of the Superior Sports Council, José Manuel Franco.

At an informative breakfast, convened in Madrid by the Europa Press agency, the Minister of Culture, Miquel Iceta, regretted not having been able to accompany the King in Doha yesterday because he had to appear in Congress and, at the same time, warned of the "absurd controversy" that, in certain media, have been generated by the presence of the King in the World Cup.

"What are we talking about? I do not want to contribute to a non-controversy that seems absolutely absurd to me. I regret that the party coincided on a day in which the ministers had to appear in Congress to present our budget sections and that prevented that I would have accompanied him, which would have been normal, but the Secretary of State did it, and I'm glad, because if you go to see a game that the team wins and if they win as solvent as yesterday, a magnificent election", said Iceta .

"I am gay. In 1999 I came out of the closet and I want people of a sexual orientation that is not the majority to have exactly the same rights and the same treatment anywhere in the world. But FIFA is an international, private, and 10 years ago they decided to hold a World Cup in Qatar. Things are better there now and in ten years they will be better," he stressed.

The King arrived in the Qatari capital on Wednesday at noon shortly before the start of the match that ended with Spain's massive victory over Costa Rica by seven goals to nil. This Thursday, before starting the return trip to Spain, twenty-four hours after his arrival, he met at a hotel in Doha with some thirty representatives of Spanish companies, accompanied by the Spanish ambassador in Qatar, Javier Carbajosa. Among those present were representatives of companies such as Acciona, Applus, FCC, Técnicas Reunidas, Sener, LaLiga, SACYR, Iberdrola, Grupo Dani García, Padel Club or Integra Agricultura, as well as other smaller companies from different sectors, who, in the mouth of of the president of the Spanish Chamber of Commerce in Qatar, David Quintanilla, thanked the King for his presence for what it means to support his commercial work in that country.

As a result of the State visit of the Emir of Qatar to Spain, last May, both countries have raised their political relations to the level of strategic association, which will imply the launching of a regular political dialogue to monitor the Agreements. Qatar is a strategic partner for Spain for gas supplies, with a share of 6.3 percent of our total gas imports. It is foreseeable that this figure will increase in the coming years, within the framework of the good political relations between the two countries.