The books that this summer you can take in your suitcase 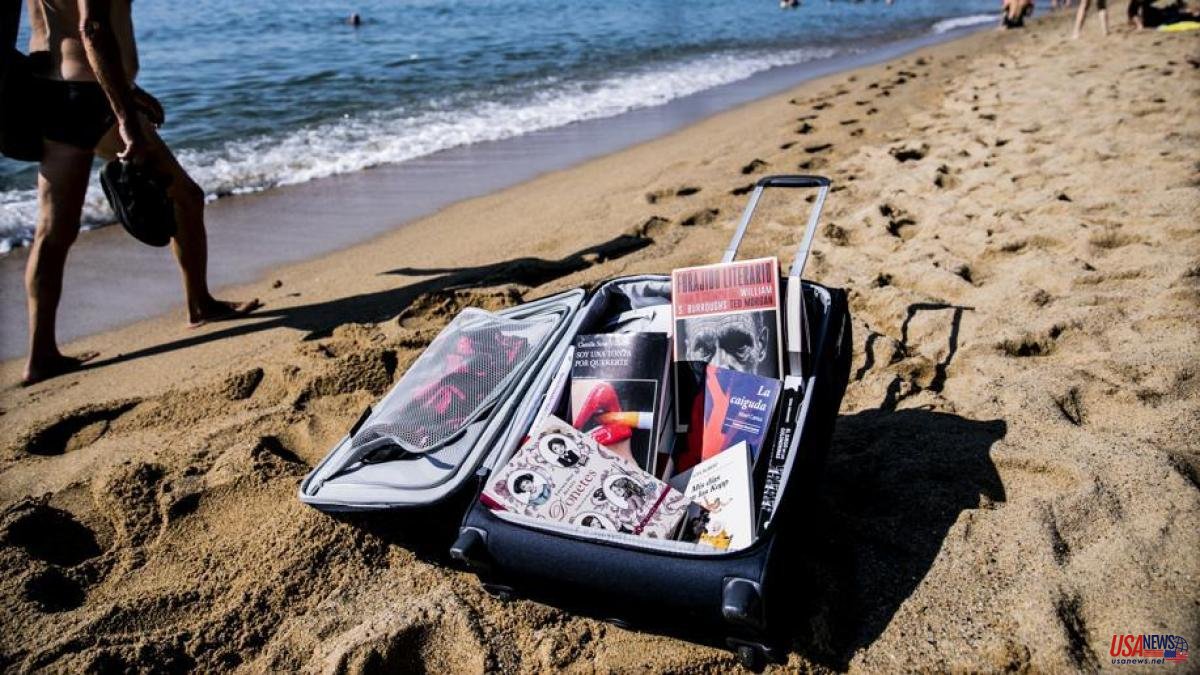 Summer has arrived. For some, the holidays are just around the corner while others are already immersed in them. The reading rate, according to various studies, rises more than 10% on these dates compared to the rest of the year, and genres such as historical novels, noir novels, romantic novels and science fiction reach their highest levels. It is a good time to disconnect from everyday life and connect with ourselves through reading, for which we propose some novelties.

We are nothing, Michael.

"Many people today had become assholes: it was an evident, indisputable contemporary phenomenon," reads a passage from

Annihilation (Anagram), the latest from Michel Houellebecq, set in a violent 2027, shaken by attacks, in the midst of the French presidential campaign.

Rebecca Makkai reconstructs, in The Optimists (Sexto Piso/Periscopi), winner of the Llibreter prize, daily life in Chicago in the eighties, shaken by AIDS. Her compatriot Joyce Carol Oates descends into the horrors of sexual assault in Violation (Password/Edicions 62).

The Turkish Nobel laureate Orhan Pamuk signs perhaps his best book with The Nights of the Plague (Random House/Més Llibres), the fight against a virus on a Mediterranean island at the beginning of the 20th century.

In Good Luck (Asteroid/Periscopi), by Nickolas Butler, three partners in a small construction company are challenged to build a millionaire's mansion in record time.

Love is the common axis of the selected titles: In Song of ancient lovers (Alfaguara), by Laura Restrepo, the protagonist follows, fascinated by the character, the footsteps of the legendary Queen of Saba.

The stories of the Argentine Camila Sosa Villada, I'm a fool for loving you (Tusquets), confirm her as one of the most outstanding authors of the moment.

His compatriot Federico Jeanmarie extinguishes a heartbreak in the Galapagos, in Darwin or the origin of old age (Alliance).

Halfway between the essay and the novel, The Book of All Loves (Seix Barral), by Agustín Fernández Mallo, explores the passion of love while humanity is in danger of extinction.

And Lucía Lijtamaer crosses two women in Cauterio (Anagrama): the thinker Deborah Moody and a young woman who has just been abandoned by her partner.

The water surrounds us

The sea, with or without holidays, is one of the protagonists of Núria Perpinyà's latest novel, Diatomea (La Magrana), a dystopia set in the 23rd century with the world devastated by floods and a scientist with the wildest solution : suppress water.

On an island like Mallorca, where Tots els mecanismes (Prow), by Melcior Comes, is mainly located, it is almost impossible to escape from the sea, although here almost everything happens on land, in a complex and choral plot with corruption, drugs, sex, madness, unsolved murders, mythical lineages, clashes between families...

The sea is also present in the latest by Albert Sánchez Piñol, El monstre de Santa Helena (La Campana), because it is set on the island of Santa Elena, where Napoleon Bonaparte was deported –and where he died. During a visit from Delphine Sabran, Marquise de Custine, and the writer François-René de Chateaubriand, a monster appears that will wreak havoc and force them to make difficult decisions.

Two recent milestones in the genre are, on the one hand, Clinical case of the Scotsman Graeme Macrae Burnet, where a woman, in the London of the sixties, becomes a patient of a psychiatrist who suspects she may have induced her sister to commit suicide.

On the other, Colombian Psycho by Santiago Gamboa, an adrenaline-pumping portrait of today's Colombia based on a dismembered body whose pieces appear buried in various places.

Likewise, X. R. Trigo has published a new case, the second, by the police and photographer Erika Ernemann, Entre les ombres (Crims.cat), which takes place in the sixties, a time full of fashion magazines and their models.

Màrius Serra, in Fora de joc a Montserrat (Empúries), takes us to the monastery with a play-crime plot starring the gaming expert Oriol Comas i Comas.

The Swiss Joël Dicker returns to his best novels in The Alaska Sanders Case (Alfaguara/La Campana), another twist to the universe of Harry Quebert.

And fans of Georges Simenon –especially curator Maigret– are in luck, as his books are being recovered, both in Spanish –the fourth in the Anagrama collection

Roma soy yo (Ediciones B/Rosa dels Vents) is the first installment of the series dedicated to Julius Caesar that Santiago Posteguillo has started.

The Bookstore of Paris (Navona), by Kerri Maher, rightly leads us to the mythical Shakespeare

In Sentimental (Angle), Albert Mestres is inspired by an episode in the life of the poet Joaquim Rubió i Ors, the Gaiter del Llobregat to delve into the romantic Barcelona of the nineteenth century.

And, without moving away from Barcelona, ​​Alfred Bosch has delved into the history of the Sagrada Família in The Temple of the Poor (Destiny/Column).

Several books by the American Brandon Sanderson occupy the top positions among the best sellers of epic fantasy in Spain, among which The Final Empire, the first installment of Born of the Mist, the Squadron saga or the most recent A Memory of Light.

In recent months, publications of Virginia Woolf's work have piled up –her rights are now in the public domain– and titles have even been duplicated: Bernat Metge publishes Cap al far, while La Temerària recovers the same book with the best-known version of the title, Alfar.

And if we can read the selection of her diaries made by her widower, Leonard Woolf, in Diari d'una escritora (Vienna), Gonzalo Torné has made his own selection in Scenes from a Life: Marriage, Friends and Writing.

Likewise, together with the Spanish editions of Alma and Lumen, for the first time the classic by Louisa May Alcott Donetes (Vienna) can be read in Catalan.

There is also a new edition of the great work by Víctor Català, Solitude (Edicions 62), which restores the author's text after more than a hundred years of editorial vicissitudes. And, of course, the classic of classics, The Book of Genesis with a prologue by Irene Vallejo.

In Infocracy, the famous Korean philosopher Byung-Chun Hal analyzes the information regime in which we live.

In Metropolis (Debate/Edicions 62), Ben Wilson traces the history of cities, while in The Dream of Ulises José Enrique Ruiz-Domènec does the same with the Mediterranean.

Rosa Montero explores the limits between madness and creativity in The danger of being sane (Seix Barral).

And, with the centenary of Joan Fuster underway, Edicions 62 continues to publish its complete work, now volumes IV and V, which appear alongside his advice, proverbs and insolence (Ara Llibres).

Although it is properly a novel, Colm Tóibín has traced the life of Thomas Mann in The Magician (Lumen/Amsterdam), in which we can trace the reasons behind the work of the German Nobel Prize winner and enjoy a first-rate narrative.

Jordi Amat is in charge of placing us in front of the life of Gabriel Ferrater in Overcoming Fear (Tusquets / Edicions 62), necessary and driven by the poet's centenary.

The biography Pasolini (Tusquets) by Miguel Dalmau, winner of the Comillas, reveals “the last prophet”.

And Baudelaire, the irreducible of Antoine Compagnon, analyzes the conflictive relationship of the French poet with modernity.

La Sombra, by David Cabrera, tells us the true story of a murderer who fled from the police for more than twenty years without leaving his neighbourhood, Raval.

A grisly crime that shocked Italy in 2016 is the focus of Nicola Lagioia's extraordinary The City of the Living (Random House/Llibres del Segle).

One of the great recent surprises in children's novels has been the idea of ​​turning unicorns into beasts as fantastic as they are bloodthirsty, with added attraction. Thus, A.F. Steadman creates a world of his own with Skandar and the unicorn thief (Salamander).

In a more realistic tone, Eulàlia Canal deals without drama with important issues that one day or another we will reach, such as facing grief, loneliness and acceptance of old age in L'hivern del Senyor Jeroni (AnimaLlibres), with illustrations by Jordi Vila Delclòs. Winner of the Bookseller Award.