The aircraft business flies over the crisis

The aviation industry defies the laws of gravity. 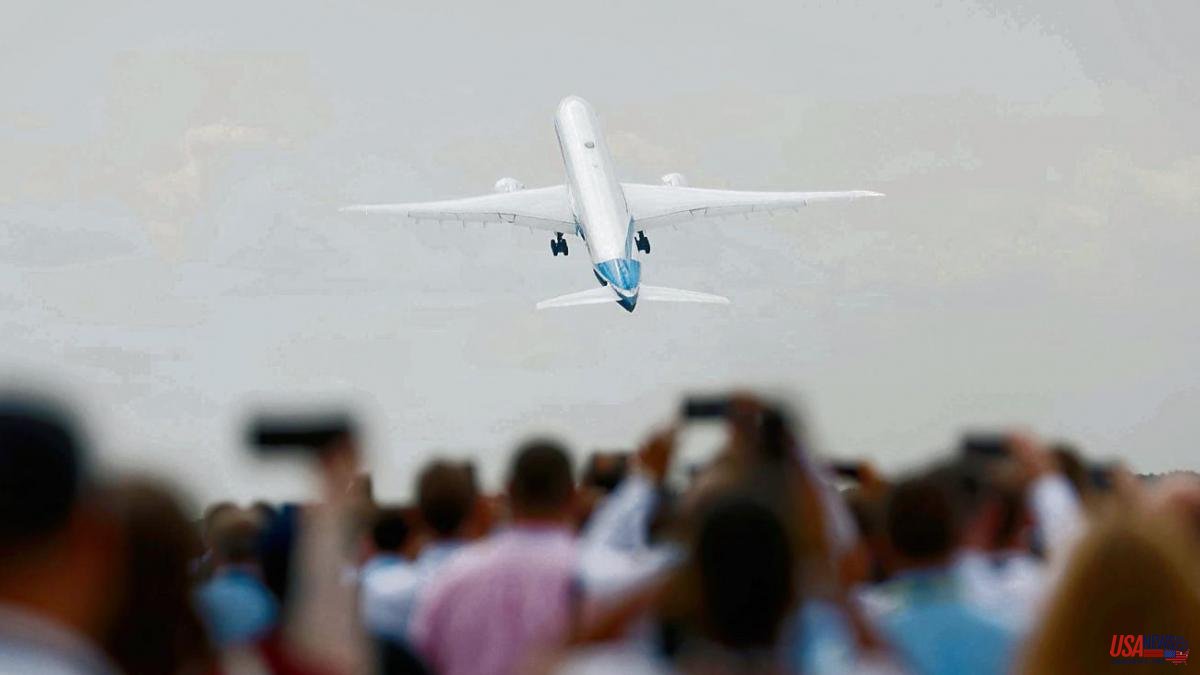 The aviation industry defies the laws of gravity.

Despite the fragility of the current post-Covid tourism recovery, airport strikes, runaway inflation, skyrocketing ticket prices, traffic that has not yet recovered to 2019 levels, and uncertainty over the war in Ukraine, the prospects for the sector are excellent.

The two largest manufacturers in the world, Airbus and Boeing, have released their forecasts between now and the year 2041 and predict that the current fleet that flies over the planet, instead of shrinking as a result of adverse circumstances, will grow in the coming decades, between 80% and 100%.

That is, it will practically multiply by two. Of little more than 20,000 apparatuses, in the sky it will be necessary to leave room for more than 45,000. A business that can exceed seven billion euros.

In the latest edition of the Farnborough show that took place this week in person after four years, the operators have once again shake hands and signed lucrative contracts.

“I think we are seeing the glory of the old days again,” said Boeing president Dave Calhoun. Medium distance traffic is already at 98% of pre-pandemic levels. Airbus has even announced that from next summer it will start building 65 new aircraft every month and up to 75 by 2025: it is its all-time record. How do you explain the strength of this sector?

“This industry has proven to be very resilient. It has always recovered from the previous crises it has suffered”, recalls Pere Suau, associate professor at the UOC's Economics and Business Studies and a specialist in the field.

Aviation can boast of having a structural strength. “Demand tends to double every 15 years. But in addition, large companies tend to have intimate ties with the states and are part of the national strategy of the countries”, says Pere Suau. From requests for defense, to subsidies of dubious legality (the causes in the World Trade Organization are numerous), many jobs also depend on these groups: they are strategic assets.

Also, keep in mind that aviation business cycles tend to be longer than other sectors. The useful life of the devices is around twenty years, the orders that are negotiated are of long duration and manufacturing an airplane takes more than five or six years for its development. Your business flies slowly, but without pauses.

In the coming decades, more and more aircraft will be needed to meet new demand. The bulk of the increase (40%) will come from Asia. We must bear in mind that on this continent, as well as in Africa, the plane is still in many cases the only viable transport option beyond certain distances.

"Demand is no longer the main brake on recovery since customers can travel again," they note from the American colossus. “People need to travel. To maintain family and friendship ties, do tourism, reconnect cultures and societies after the pandemic”, they say from Airbus. But new displacement needs will also grow: religious, academic, medical tourism.

To this component of demand we must add one of the unexpected effects of the pandemic: the boom that electronic commerce is going to experience in the coming years. Boeing studies certify that the fleet of cargo planes that will transport merchandise from various parts of the world –in express mode– will grow by itself by 80% by 2041. International trade will double in the next twenty years and it will take planes that fill their holds with these goods.

There is an unquestionable fact: 80% of the current air fleet is not considered the latest generation. In other words, existing aircraft must also be renewed and replaced. The regulation and the requirement to reduce emissions will be a decisive factor in updating the range.

In Europe, the environmental directives are stricter than in other areas and point to aircraft starting to use more and more sustainable fuels (SAF, Sustainable Aviation Fuels) to reduce CO2 in the atmosphere and also to lower the bill: the cost of fuels, which at the beginning of the century represented 10% of the total, has gone to 25%.

So the new planes will not only consume less, but, in all likelihood, use cheaper energy sources than today's fossil fuels, which are through the roof. Hence, the large suppliers (GE or Rolls Royce) have spent years researching more efficient engines.

Jaime Peraire, professor of aeronautics and astronautics at MIT in the US, has been studying possible solutions for years. “The demand to fly is there, but the technology will have to solve the problem. This is a sector where technologies evolve very slowly compared to other sectors, also for security reasons”, he recalls.

Among the different options, it highlights the gasoline generated in a green way. He also mentions hydrogen, although it has its difficulties because it has to be subjected to a process to make it liquid and it is also very flammable. “Batteries are a good solution, among other things because they are silent and would allow you to fly at night in cities. But its weight is still very large. Hybrid solutions are most likely, at least in the medium term”, indicates Peraire.

But not only will the aircraft have to be changed to be more efficient from an environmental point of view, but it will also be necessary to remodel the range of the fleet to focus on those models that will be more profitable. This means leaving behind the A380- or 747-style maxi-planes, which are almost out of the question now, to focus on single-aisle aircraft.

Indeed, both Boeing and Airbus predict that between 75% and 80% of the new aircraft to be built in the coming decades will fall into this category, ideal for medium distances. Because one of the changes is that intraregional movements will increase more steadily than intercontinental ones, perhaps a reflection of the current deglobalization.

Airlines will need to have a family of aircraft adapted to this trend.

However, among so many triumphalisms, the clouds persist. The 400 new orders from the two giants, Boeing and Airbus, at the Farnborogh show pale in comparison to the 1,400 that were signed at the 2018 edition.

"Despite record heat, no record orders," Jefferies analysts quipped in a note. In the short term, neither are the forecasts for the winter season, in the midst of the energy crisis, usually bright.

Jaime Peraire underlines another turbulence that the aviation market may experience: the lack of infrastructure. "In Europe the capacity of the airports is at the limit, many are already collapsed and do not give more of themselves".

We must not forget either that to manufacture an airplane, parts are needed that, as has been seen in other industries such as the automobile industry, are not always available and lengthen waiting times. In fact, there is so much pressure from airlines to obtain aircraft that Willie Walsh, director general of IATA, recently went so far as to say that "airlines are frustrated by delivery delays." Any supply crisis can mess up the flight plan of this industry.

As you can see, the challenge is exciting. As Peraire says, “if there is ever a time for things to happen in this industry, the time is now.” Happy flight.