Tales to face autumn; a review of what's new

The good and prolific autumn harvest forces us to open a second chapter of children's novelties to start the year with good readings and better illustrations. 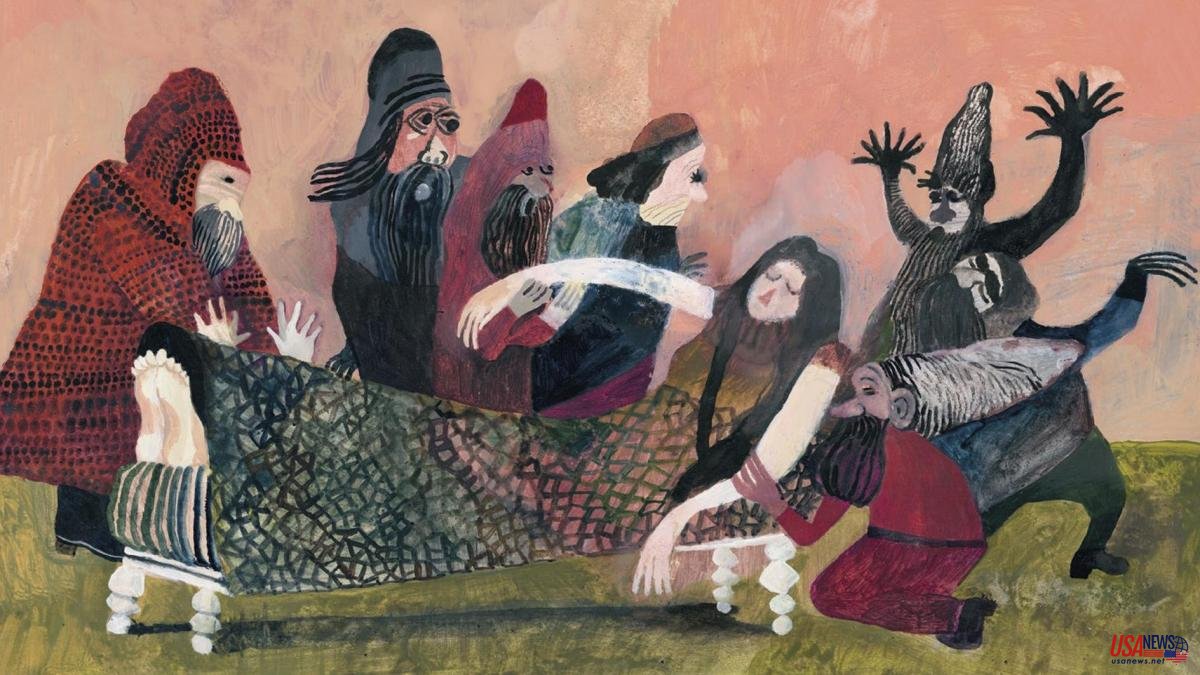 The good and prolific autumn harvest forces us to open a second chapter of children's novelties to start the year with good readings and better illustrations. With varied themes, some of these new proposals delve into important aspects such as jealousy and others play with the limits of the book to give more meaning to the narrative. We start.

The German author and illustrator Helme Heine returns to bookstores with the endearing story of the Ram Tam Tam dog, a furry, abandoned animal that knocks on our protagonist's doors to become his best friend. A simple story, with no more pretense than to record a great friendship, but it does so with great beauty of word and image. A friendship that goes beyond the earthly, and that raises with the same naturalness and simplicity the moment of saying goodbye: death is also part of our day to day and this is reflected by Heine, who despite the longing, continues to weave adventures between dreams and memories of the protagonist.

The first translated work that comes to us from this versatile Norwegian writer who has created genres as varied as novels, poetry, essays, short stories, and also children's and youth literature. It is a large format book with hard covers where she dominates the illustration (magnificent and colorful), which takes us to the moment just before going to sleep. Little Bo won't stop doing silly things to try to delay the moment of closing his eyes, so his mother calls him out. You have to have dinner, take a bath, brush your teeth...

It is a ritual that is repeated every night and today the animals sneak in. Meerkats sleep in groups to keep warm. Bats sleep upside down. The parrots do it with one leg between their feathers, so as not to be cold... All the animals sleep, and Bo, encouraged by his mother, transforms into each one of them before going to bed. A beautiful ritual that makes this book a perfect read before going to sleep. Also in Catalan.

Anyone who has never had hiccups, raise your hand. No one? Logical. It is a very annoying but natural sudden spasm that can appear for many reasons, such as eating fast or drinking carbonated soft drinks. The fact is that Bruno, our protagonist, has had such a strong attack of hiccups that even in the street they shout hurrah! passing by with their hip, hip... At home, everyone tremendously busy (even Grandma), they go from giving Bruno no choice, who decides to investigate on his own. And he does it by reviewing the dictionary and looking for things that begin with hip, to see if they are the solution. And so he visits the hippos, puts himself in the hands of a hypnotist and even enters a racetrack. But the solution is at home waiting for him. His family's overcrowding was just a ruse. A fun story that, by the way, puts us in contact with truly complicated words.

Narcissus is not just any elephant. He is an important piece of a circus. His performance is one of the highlights, along with the magician, the bearded woman and the trapeze artist. The difference with them is that Narciso is tired of always doing the same thing: "throwing a peanut into the air, turning around five times, catching the peanut with his trunk and delicately inserting it into his mouth." And he has decided to give a radical change to his life.

For this there is nothing like making plans. Several in case any of them fail. Because in the end with tenacity and patience one can achieve what is proposed. Even if one is a huge elephant that does not go unnoticed even in painting. Narciso's great plan and great decision. And here is the story of a brave man. Also in Catalan.

The first impression upon opening this new story by Carme Solé Vendrell was to evoke the late Tomi Ungerer. The framed illustrations on each page with the text at the bottom, as well as the aesthetics of the drawing, have been suggested to me as soon as I open the pages of Fab, although it is true that the Catalan illustrator has a very particular style, easily recognizable in the traits and characteristics of his characters. Here he puts his art at the service of a monster who has a headache and who tries by all means to solve it, accounting for an important repertoire of remedies, some known, others invented, but all of them unsuccessful, until he finds a pair of glasses green and a rescue mission. And there is nothing like stopping looking at your navel and having your mind busy to scare away all evil. Also in Catalan, Galician and Italian.

Friendship, feelings, empathy, sadness, overcoming... We never get tired of seeing books that deal with these issues in children's literature, but not many manage to make such an interesting amalgamation of elements like this The Elephant in the Shadow by Canadian Nadine Robert, of which we have little translated production. Here, she places the protagonist in the shadows, as a synonym for the sorrow that dominates him, a sadness that not even his friends -the crocodile, the monkey, the ostriches...- manage to make vanish with antics, songs or feasts . Only a little mouse manages to get the sad elephant out of his reverie and isolation, a small animal that has been lost and that only asks you to sit quietly next to the elephant to catch its breath. A small gesture that manages to move a tremendous mountain. Also in Catalan.

If it's the weekend and you're thinking of staying in bed a little longer while the little ones are loose around the house, we recommend that you don't. Is it a bad idea. Or if not, look at what happens at Martin's house. His parents tell him to go back to bed because he is very early, the sun has barely risen, but when trying to return to his room, something startles him. Is it perhaps a monster that has crept into his bed? So he begins an intense investigation that will lead him to devise an infallible plan with dire consequences for the whole house. Because we must not forget that there is nothing easier for a child than to mess up in five seconds what has taken hours to put in order. And this book is a clear example.

In addition, the authors play with the format of the book, taking advantage of its horizontality, which makes reading even more interesting and fun.

Bang Editions has found an original way to introduce the little ones to the practice of yoga through a comic character who lives in the Himalayan mountains with his wife and son. He is Guruyi, an unconventional spiritual guru whose mustache matches his tank top. But appearances are deceiving, because this teacher is a sage among sages and as soon as his future students show up at his house in the Himalayas, they already know which foot each one limps on, or rather, what his dreams are. If the guru is unconventional, make fun of the students, who include a mummy and a vampire.

This yogi adventure proposed by the Basques Maite Rosende and Jon Lorente, illustrator and yoga teacher respectively, is not just a fun reading proposal. It is also an original game to get started in this ancient tradition that can be used every day after reading the comic, and thus practice yoga in a fun way. The comic is accompanied by a collection of cards so that, with their eyes closed, players choose a series of cards that will make up the day's practice. It's not worth looking. And remember the breaths. There is also no age limit.

This is the initiatory journey of a bear who decides to leave everything behind and embark on a journey to another place, other prairies. We do not know the reason: only that nature advises him to do so, although he apparently lives happily. Is it because he is in danger? Or that your house is no longer safe? There's no answer. Perhaps it is not the important thing, and the important thing is the trip itself, one that the Canadian author Marianne Dubuc reflects with great sensitivity and simplicity. Fear of the unknown and doubts are mixed with the arrival of new acquaintances, beautiful settings and multiple corners to explore. Every great adventure has two aspects: one exciting and the other unsettling, but bear does not stop moving forward until he finds that space where he thinks he will find happiness. A search to which we gladly join. Also in Catalan.

For some years now, the Sevillian author and illustrator Raquel Díaz Reguera has put her pen and art at the service of girls. Empowering them is not just her goal; also open their eyes to gender issues and inequalities with examples that are so clear, sometimes overwhelming. This I'm only mine, evokes the story of La ratita presumada, but just as in this the cat soon brings out its true self, unfortunately for the rat, in I'm only mine the transformation occurs little by little, with each new gesture, with each bad word, with each imposition...

The idyllic love of Ratón and Ratona little by little darkens, intoxicating, sometimes subtly, others openly, until Ratón shows his true face as a hunter, a cat... The title of the Sevillian illustrator already gives us clues of an end that is at the same time a step forward that we would like, with all our hearts, that all women and girls have the opportunity to take. Also in Catalan.

A revisitation of the story of Snow White, but this time from one of its darkest sides. The stepmother is the one who takes the floor to express her tremendous jealousy towards the beautiful girl who seeks refuge in the house of the seven dwarfs. A beautiful book whose illustrations work parallel to the text. First the cruel words: "I order you to take Snow White to the forest and bring me her liver and her lungs." Then the images, beautiful double-page pictures that mark the narration from the most pictorial point of view.

The exquisite edition of this book makes it a perfect illustrated book for adults in love with this type of book, and children who come to it will find a version of the story without any kind of sweetener, much closer to the meaning of the original narration. of the Grimm brothers. "I wanted to change the point of view of the text and create a discourse about suffering, jealousy, revenge. Taking sides with darkness, how one could try to understand madness. Explain the brutal, the dark, the animal, how could explain the whole of childhood," the author writes in the foreword. Welcome to this new version of the story. Also in Catalan.