Two years of perfection, of flawless mastery, are over. 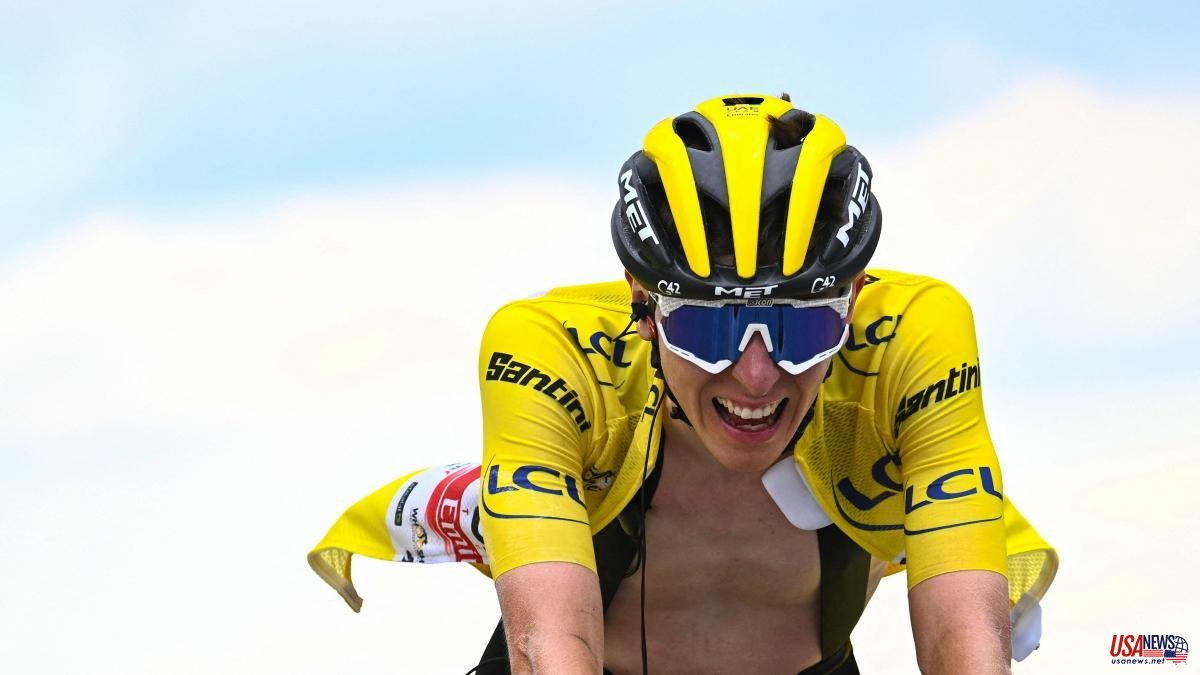 Two years of perfection, of flawless mastery, are over. Two and a half undefeated Tours fell apart. Tadej Pogacar knew a strange face of cycling for him. The Slovenian showed an unknown weakness in him. The sinking of the double champion was unexpected. He went from smiling at the camera, from overwhelming, from going out in the first person to all the attacks, from attacking and being alone with his greatest rival, from having the race controlled to faltering, to not being able to follow Vingegaard, to fainting, to losing the yellow, to leave three minutes and fall to third place. A plumb fall.

5 km from the Granon finish line, another race began. Nothing to do with the intractable Pogacar that wanted it all. The crisis was complete. Pogacar was left empty, whose tiresome pedaling contrasted with Vingegaard's strength. The seconds fell on each curve, on each ramp while his opponent was still convinced, making differences, increasing the distance, gaining minutes until seizing the yellow.

Very fiber, fine, light climber, the Dane danced towards the top, for victory. He made him suffer last year on Mont Ventoux and brought out his colors on the Granon. This time he couldn't react. At more than 2,000 meters of altitude, Pogacar caught a bird, ran out of energy, bottomless, without sugar in the body to resort to.

Jersey wide open, head down, look at the ground, mouth open to try to capture as much air as possible. Pogacar's image was as new as it was defining. He was empty. Not that he couldn't follow Vingegaard. It's just that he also left Thomas. They even surpassed even Gaudu and Yates.

A colossal route, with two climbs out of category, an offensive and brave strategy from afar, a majestic show, an unknown fainting for a cyclist until now almost perfect and a more than deserved change of leader. A stage to remember in the Alps. For Vingegaard, who already knows what he is capable of – it is his first stage and the first time he wears yellow – and that he has a good advantage to defend himself. For Pogacar, that he must recover his pride, he can use it as a source of inspiration and revenge to try to win the third Tour. For Enric Mas, swallowed up, dropped from the Galibier, because he lost all his podium options, forcing him to recalculate his race plan.

One, two, three, four and five answers in the Galibier, without discriminating the wheel. Pogacar came out in the first person. He didn't care if Roglic or Vingegaard attacked. As if nothing, the Slovenian of the UAE responded to the continuous attacks and counterattacks of the leaders of the Jumbo. He did not select. He defended himself in a big way, without fear despite being surrounded by four cyclists from the Dutch team, who had isolated him from his gregarious by rushing just past the Télégraphe with Laporte, who was coming from the breakaway.

Until he got tired of defending and attacked himself. Maybe it wasn't necessary, maybe all that battle prevented him from hydrating and eating. But seeing himself on the ropes because the Jumbo left him almost alone, he wanted to get his claws out. On the long descent, Van Aert, Kuss, Roglic and Kruijswijk surrounded him again for the final ambush on the Granon. When Pogacar did not go out quickly for Vingegaard, it was the realization that the Dane was going to do damage. "If I don't try it, I won't win. Being second is nice, but I've been. I had to try to win and now I'm the leader. I'll keep fighting until Paris," said Vingegaard after completing his team's work of art.

In the Granon in 1986 the legend of Bernard Hinault ended. There he lost the yellow jersey and the Breton never put it on again. He was unable to win the sixth and ended up retiring after being overtaken in his race by his teammate Lemond. But Pogacar does not give up. “It has not been my best day but I want to fight this race until the end. I'm going to give everything so I don't regret anything”, promises battle. And he warns ahead of Alpe d'Huez. “I have lost three minutes. I'll still gain three minutes tomorrow”.