"Russia must suffer a humiliation to be cured"

Galia Ackerman (Moscow, 1948), from a Russian Jewish family, emigrated to Israel as a young man and later settled in France. 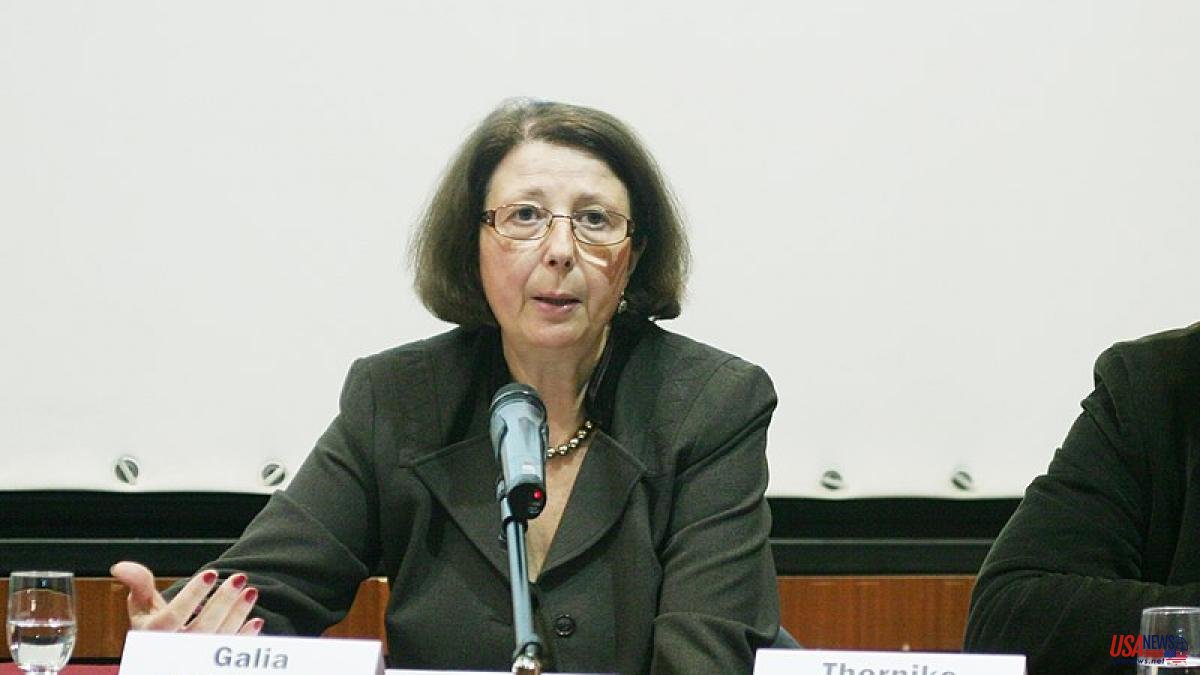 Galia Ackerman (Moscow, 1948), from a Russian Jewish family, emigrated to Israel as a young man and later settled in France. This journalist and historian, an expert on Russia and the ex-Soviet world, is co-author of The Black Book of Vladimir Putin, a work that has caused an impact, whose Spanish version (Espasa) comes out on November 30. Ackerman does a relentless analysis of Putin and Russia.

His book defines Putin as homo sovieticus. What does that mean today, in the year 2022?

He is someone for whom the Soviet Union was a model. There is an ideology that has changed, but ideology is only one facet of the Soviet regime. The most important thing was the social structure, the mode of government, the behavior of the citizen. What we observe in Putin is that he has remained true to his Soviet origins.

Can you give examples?

The term homo sovieticus was first used by a satirical writer, Alexander Zinoviev. The homo sovieticus is someone who has a rather vague ideology. In Soviet times, you always had to agree with the party, even if it made contradictory decisions, whether it was anti-fascist or signed the friendship pact with Nazi Germany (the Ribbentrop-Molotov pact), when it supported the Yugoslav Tito or when it He called himself a fascist because he did not agree with Stalin. Today something similar happens.

It is an obedience to the State, accepting what the State demands. That is the official part of homo sovieticus. In the perhaps unofficial part, he is someone who is incapable of thinking about the common good. He is someone who will steal everything he can, who will be obsequious to the boss but contemptuous of his subordinates, someone deprived of empathy and who, if it suits him, is capable of denouncing a close person. It was the extreme conditions of the Soviet regime that created this mentality.

Yes. We see this mentality coming back. Every time power tells lies, they believe them or make it appear that they believe them. Putin said that he would never attack Crimea and then annexed it. At the beginning of the war he said that the main objective of the war was to destroy the Kyiv regime and its Nazi ideology, which is false. But now that they are suffering major setbacks, he wants to make peace, of course on his terms. They exert pressure to make peace because they have no means of continuing the war. Now they tell us that this entire military operation, the incessant bombing of Ukraine, is nothing more than to defend the Russian Donbass. Everything is like this. In a regime based on lies, citizens adapt.

You did not like it very much when Macron said that Russia should not be humiliated.

I think it is a very bad attitude. If one talks like that, one could also find a justification for Hitler because Germany was also humiliated (after the First World War). And so? Germany lost the war and as a consequence, yes, it had to pay reparations, it lost a part of its territory. It is so. If the war is lost, there are consequences. In the case of Russia, when the USSR collapsed, she kept all the territories of Russia proper. If Putin felt it an existential humiliation that the other Soviet republics did not want to stay with Russia and preferred independence, he should ask why. It would be because there were very good reasons. It is a humiliation resulting from imperial behavior towards other peoples of the USSR who did not want to continue in this way. On paper, all the peoples of the Soviet Union had the same rights, including the right to secede, but in reality everything was run from Moscow and national cultures were repressed. Ukrainians thoroughly experienced it. There is nothing to feel humiliated about, but regret that the whole policy was wrong.

Returning to the present. Should Russia be humiliated or not?

Sometimes humiliation is healthy because the Russian state has committed a crime, with the complicity of many Russians. Therefore, yes, to be cured sometimes you have to go through this humiliation. The humiliation consists of internalizing that it is guilty of the aggression, that Russia has killed Ukrainian citizens who were absolutely not guilty of anything and that it must be repaired. Russia has caused destruction such as we have not seen since World War II. She must pay reparations and, of course, she must get her troops out of the Ukraine.

Of course. Crimea could be considered something special because it was Russian for a long time, but it hasn't been Russian for almost seventy years. Also, when Putin annexed the other four regions, he somehow desacralized the annexation of Crimea. Now it is one more annexed territory. International law does not give you any right to stay in Crimea.

And what about war crimes?

Sooner or later, those thousands or perhaps tens of thousands of war crimes will have to be prosecuted. Will Russia agree to hand over those responsible, starting with Putin? That is another question. I think, symbolically, even if they are tried in absentia, they should still be tried and a verdict delivered.

Are you afraid that Putin will finally use a nuclear weapon or another weapon of mass destruction, an electromagnetic bomb, something very powerful, to prevent a Ukrainian victory and freeze the situation?

I have no way of knowing what is going through Putin's mind. He has threatened and at the same time denies that he is going to use a nuclear weapon. The Americans have warned that if he uses it, his entire army and fleet will be destroyed by conventional forces. They have the means to do it. Will Putin dare under these conditions? The risk is not zero but personally I don't see it as very great because the use of the bomb will certainly be the end of Putin. And he is someone not very brave. If you compare the behavior of Putin and Zelensky, Zelensky is at the front, he arrived in Kherson shortly after the liberation, despite the fact that movement inside Ukraine is very complicated and there are shelling all the time. He doesn't sit in a bunker. He speaks every day to the people about him. He travels in Kyiv and throughout the country. Putin, in the two years of the covid, did not appear in public. He was locked up all the time and always spoke through a screen. He doesn't go forward. A person who is so afraid for his life will not do something that risks causing his own annihilation.

Do you think that the isolation during the covid influenced Putin to organize this war?

Putin has long been isolated from the world. He doesn't use the internet. In the images he speaks to a screen, but he does not have a computer. In those two years that he didn't go out, he plunged into a parallel world. And, of course, there is no counterpower. He does not listen to anyone except the head of the secret services, the defense minister and the secretary of the National Security Council. I think that Putin's entourage tells him completely sweetened things, probably false, and that is why he made that huge strategic mistake of starting the war in Ukraine without fully understanding what the Ukrainian people are, what is happening in this country, which is not a town run by some drugged Nazis, a completely false image.

Do you see it feasible for Russia to be a rule of law, a democracy, in the near future?

The Russian people have been subjected, for more than twenty years, to extremely toxic propaganda. Now, to heal, time is needed, for democratic, liberal forces to come to power. It's possible? When? It cannot be said today. It is not a fatality that Russia that we have today. It takes a lot of work and above all that there are enough people to do this work. During the nine months of this war, almost a million Russian citizens have fled abroad, one might say the living forces. But even earlier there were millions and millions who left Russia. Will all those people come back one day? Maybe not. Because of this policy, little by little Russia has been deprived of a part of its vital forces. Will the ones that remain be enough to overcome that mental poisoning? I can't tell you and I don't think anyone is.