Rafa Márquez: "I have no experience, but I follow my instinct"

In 2003 Joan Laporta baptized Rafael Márquez (Michoacán, 1979), as the Kaiser of Michoacán. 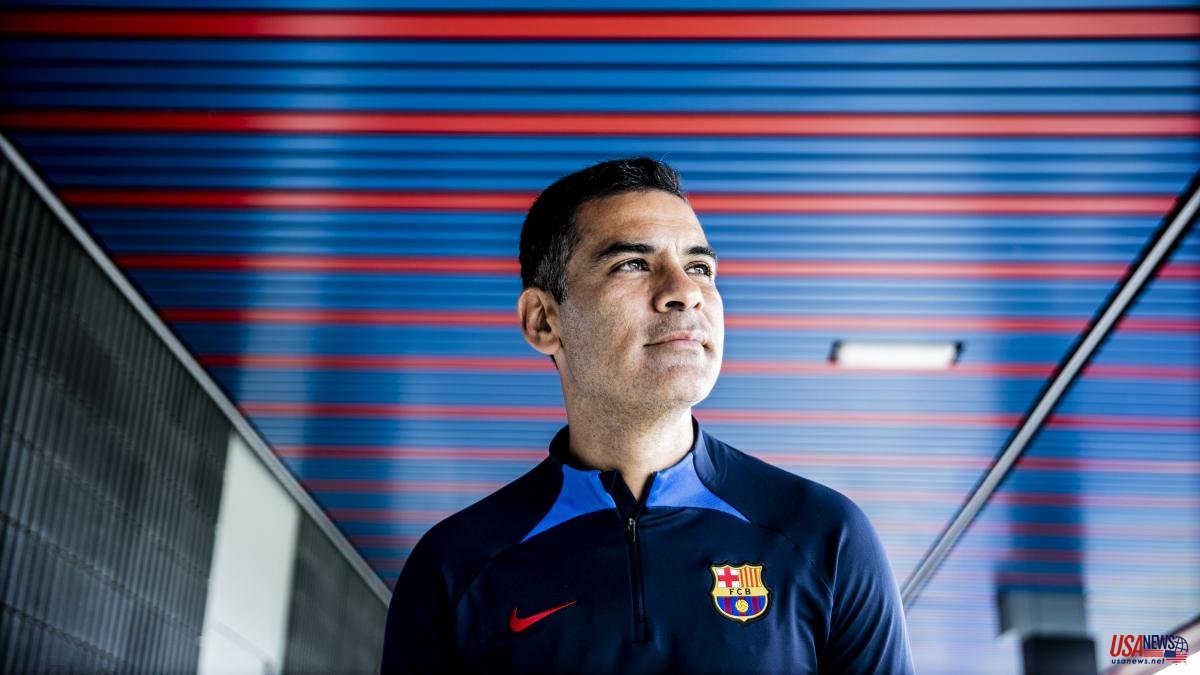 In 2003 Joan Laporta baptized Rafael Márquez (Michoacán, 1979), as the Kaiser of Michoacán. He played with Ronaldinho and with Messi and won everything with the best Barça in history. Now the president has given him the opportunity to debut on the bench directing the subsidiary. At the moment he is doing very well: his Barça Atlètic knows no defeat. He attends La Vanguardia at the Estadi Johan Cruyff. Where it all begins.

Is it at La Masia where everything should start regardless of Barça's economic situation?

Of course. By values, by history and by principles. And also because I think it is essential that there is the same way of proceeding. There is a lot of quality to be able to have a good base of people from the academy in the first team.

Do you like to walk around the sports city to see possible promises?

I do have the juveniles more seen. Beyond that, the truth is that I would like to but time does not allow it. But I have informants who explain to me and tell me about players who are interesting to watch. This philosophy, this way of working, is very important to everyone.

How often do you talk to Xavi?

We know each other very well, we have a very good friendship and now we are back working for the same club. We talk once or twice a week. The communication we have is very important because we have to try to be at the service of the first team, they are the most important in the chain.

Is Pablo Torre an example of that communication?

Yes. He came this weekend to work with us for the first time. We hardly had to correct things or explain how we work because our routine is the same as that of the first team. He knows that he has the doors to come when they consider it opportune. He is a boy who has a lot of quality to be in the first team, but he also has a lot of room for improvement. Xavi is managing it very well.

tell me about that routine

They come for breakfast two hours before training, just like the first team. Then they go through the medical services to control their weight and other values. After training they do a lot of gym work and also preventive work with the physiotherapists. We want them to get used to that rhythm so that when they get to the first team it is not something completely new for them.

There was some criticism about his little experience on a bench

And I still have no experience, it's my first time. But in the end you follow your instincts. It's about working and working. This is very long. We're not going to be the best now that we haven't lost a game and we're leaders, nor the worst when a defeat comes. Regardless of whether promotion is achieved or not, my main objective at this stage is to help the boys learn and for most of them to play in the First Division.

And would you like to train at the Camp Nou?

I believe that in life you have to have dreams and goals. To achieve them you have to work hard and have much more experience. I just started and we'll see what happens during this stage and if I'm good at it. And if not, then I will continue working.

Was it clear to you that you wanted to be a coach after retiring?

No, but a lot of people told me that I have that profile to be a coach, since I was good at helping my team-mate get into position. As a player, I was an extension of the coach on the field, so I decided to take advantage of this facet to start this stage.

What technicians are your references?

I have had great coaches like Ricardo La Volpe, Pep Guardiola, Rijkaard, Deschamps or Hugo Sánchez who was in the national team. I have learned from all of them. Personally, I try to apply the good and avoid the bad.

Some managed the group better, others worked more on footballing aspects and left aside the mental part... I try to be balanced in every way. I try to work on the pitch, yes, but also to reinforce his mentality. Soccer is not just soccer. It is also a way of living.

His board gave me the opportunity to come to Barcelona in 2003. Now he has given me that confidence again. Of course, important things are achieved with Laporta. The effort he has made to ensure that the first team has a competitive squad shows that he is a person with character who always seeks the best for the club.

So Barça is back?

He's on it. They have made a great effort to have this squad. But now you have to go game by game.

Yes. As it happens in life in general. Certainly everything is much more expensive. But surely if I look at what the players cost in a time before mine, surely the amounts were even lower.

He was fired in 2010. He had one year left on his contract but decided to leave in search of minutes. Is leaving on time a triumph?

I don't know if it's a win. But I felt very satisfied to know that despite the fact that I had one year left on my contract, I was not left alone to get through that year and continue earning what I was earning. The economic aspect has never been something that leads me to stay in a comfort zone. I left with the recognition of all the people.

What do you suggest to see Piqué and Alba on the bench?

You have to mature and accept the role that you have. Now Barça has had casualties and they will surely have more opportunities.

Would you like to see Messi again at the Camp Nou?

Talking about Barcelona and Leo Messi is practically the same. This has been his home for a long time. He has made history with the club and I think the doors will always be open. Personally, I don't see Leo wearing colors other than those of Barça or the Argentine team.

In 2017, the United States linked him to drug trafficking. How do you remember that?

It was an injustice. They pointed me out without having investigated me. This is how a part of the United States government works. It was one of the most difficult times of my life, but in the end I think things happen for a reason. That helped me get rid of people who didn't really believe in me. I was also surprised by people who were not so present to me and who have always been there to help me. People who remind you of who you are and want to be an example. Despite suffering such a low blow, I still hold my head high here.

You have played five World Cups in a row. All as captain. But none in Qatar or in November...

It's a bit strange. But due to the territory in which it is disputed, it is evident that it has to be played now. I think there will be a high level because the players will arrive better than if it is at the end of the course. The ones that will suffer the most are the clubs.

How do you see Mexico?

They have a good team. I don't know Tata Martino. I do see that he generated very high expectations and perhaps he has not finished convincing in these last moments, but I am confident that Mexico will do a good job.

I think that any coach would like to be the coach of his country. But first you have to earn it. I must have more experience to be able to offer guarantees.

Do you see Spain as a candidate to win the World Cup?

Spain is always one of the favorites because of how they play. Then there are Brazil and Argentina, which continue to be great powers. Also Germany, which is perhaps not the most powerful but always fights to be at the top.

What memories do you have of your childhood?

I had a very happy childhood. In a Mexico where you could still play in the street and put two stones that simulated the goal. We didn't stop playing even if it rained. It was getting dark and we were still playing. Your mother had to come get you so you could come home. I come from a fairly humble family. Of working people. We lived without luxuries, but the most important thing is that they gave me values ​​that have helped me to be who I am.

In Mexico there is a lot of football but unfortunately insecurity has caused confidence to be lost. You no longer leave children alone in a park. I have a foundation that was also affected by the issue I mentioned earlier with the United States. But still I am very stubborn and try to help. In my country we need more leaders.

How is Rafa Márquez in his free time?

I am a father, husband and son. Also tourist. Life has taught me to live in the present without trying to think too much about the future because that creates anxiety. I also don't think about what happened to me because that can lead to depression. So I try to be happy, balanced and enjoy myself.