Puigneró faces Aragonès due to the demands of the ANC

The first attempt to restore affinities between independentists ended up directly confronting the vice president with the president of the Generalitat. 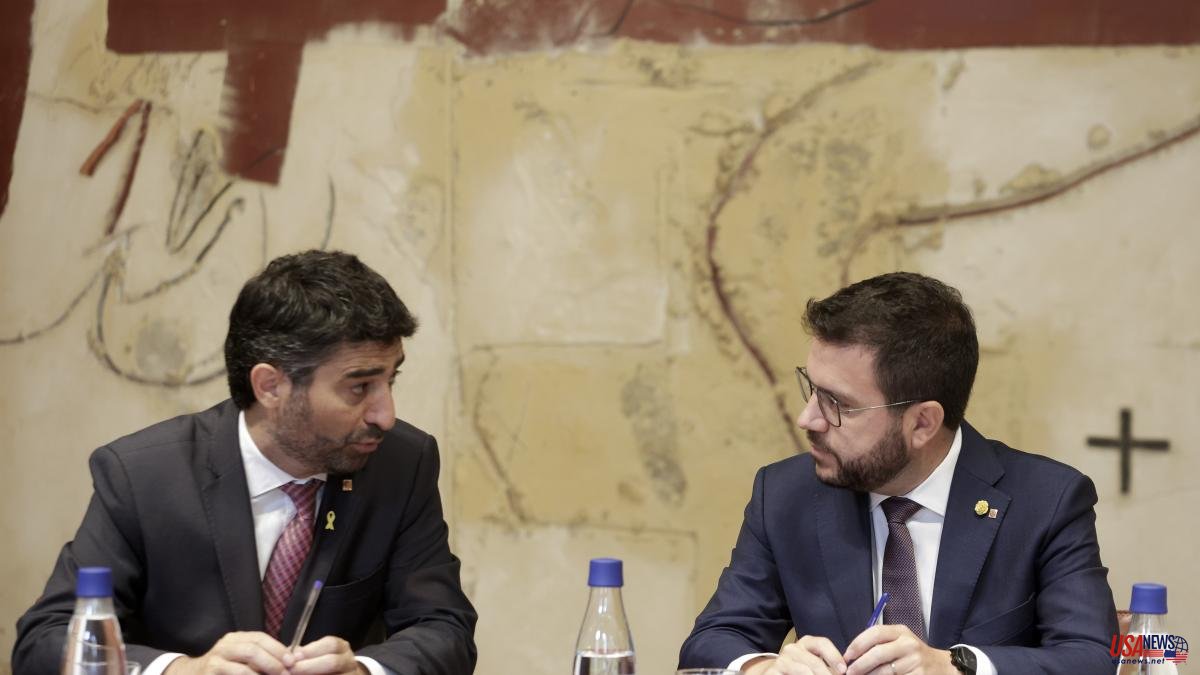 The first attempt to restore affinities between independentists ended up directly confronting the vice president with the president of the Generalitat. Two days after the Day and the massive demonstration, Pere Aragonès has convened the Cultural Omnium, the Catalan National Assembly (ANC) and the Association of Municipalities for Independence (AMI) in Palau. The result has been unsatisfactory, it has failed in the objective of reaching an agreement or at least moving forward, above all because of the "maximalist" position of the ANC, and it has ended with Vice President Jordi Puigneró trying to amend the Government's position, or less than Pere Aragonès.

The second in command in the Generalitat has sided with the entity led by Dolors Feliu and has assured that the negative assessment of the ANC's option to proclaim a DUI in the second half of 2023 is not the position of the Government, but only of Presidency. What's more, Puigneró has subsequently met with Feliu and at the end of the meeting he has assured that "any proposal that goes along the lines of getting closer to independence, it is necessary to listen to it and value it". Tide in sight.

Jordi Puigneró, in the ranks of Junts, has thus responded to the Republican and Minister of the Presidency, Laura Vilagrà, commissioned by the Catalan Executive to give an account of the meeting to the press. Vilagrà had affirmed that the proposal made "in a hurry" by the ANC are only "proclamations" that do not make the objective of independence viable, in her opinion. In addition, she has demanded "restore confidence" before addressing any approach that bets on forming a strategic direction for independence.

“Today the conditions do not exist and everyone knows that”, the Minister had summarized at a press conference on the option of the Assembly, who also considered that any proposal made has to be “serious, argued and worked” .

Puigneró, for his part, met Feliu later, in a "personal" meeting. A total contradiction with the officiality of the summons by Aragonès hours before. Prior to meeting her, the vice president has reduced Vilagrà's position in the circle of the Ministry of the Presidency and the president of the Generalitat.

It is clear that there is no credit between Aragonés and the ANC, but also that what there may be between Aragonès and Puigneró is wearing thin. And even more so if you take into account that Junts's threat to leave the Government hovers if, after the general policy debate to be held between September 27 and 30 in Parliament, the pro-independence strategy is not redirected.

Between Òmnium and the AMI on one side and the ANC on the other, trust is also fading. At the meeting, Xavier Antich, president of the cultural entity, and Jordi Gaseni, leader of the group of municipalities, reproached Dolors Feliu for "her improvisation of him" since he announced his proposal to the press minutes before the meeting in Palau.

In addition, both Òmnium and the AMI pose a totally different scenario from the one reasoned by the ANC. Above all, the association led by Antich, which bases its movements on the reformulation of a strategic direction of independence that brings together a multitude of pro-independence actors, many more than those brought together by that General Staff of the procés that made 1-O possible from clandestine .

The meeting in Palau lasted two hours. During the first of them, the ANC proposal was discussed. Feliu has broken it down to the astonishment of Aragonès, Vilagrà, Antich and Gaseni. At various times, the leader of the Assembly has urged the president of the Generalitat to make a statement. "You have to tell me yes or no," she has claimed up to three times. After Feliu's intervention, the rest have asked for specifics, but also explanations of a proposal that they have considered "improvised and without any foundation", and part of those present have criticized Feliu for both the way of announcing his option, and the substance of is.

At the exit of the appointment in Palau, Feliu has continued defending his proposal and has stood up to Aragonès. He has accused him of adopting a "fixed stance" for ruling out the DUI. "We haven't even gotten a 'we'll look into it'."