He says he is "trying to polish the structure" of the Government, where there will be names with experience that will be rescued from the previous legislature, but also new signings in order to "combine experience with freshness. 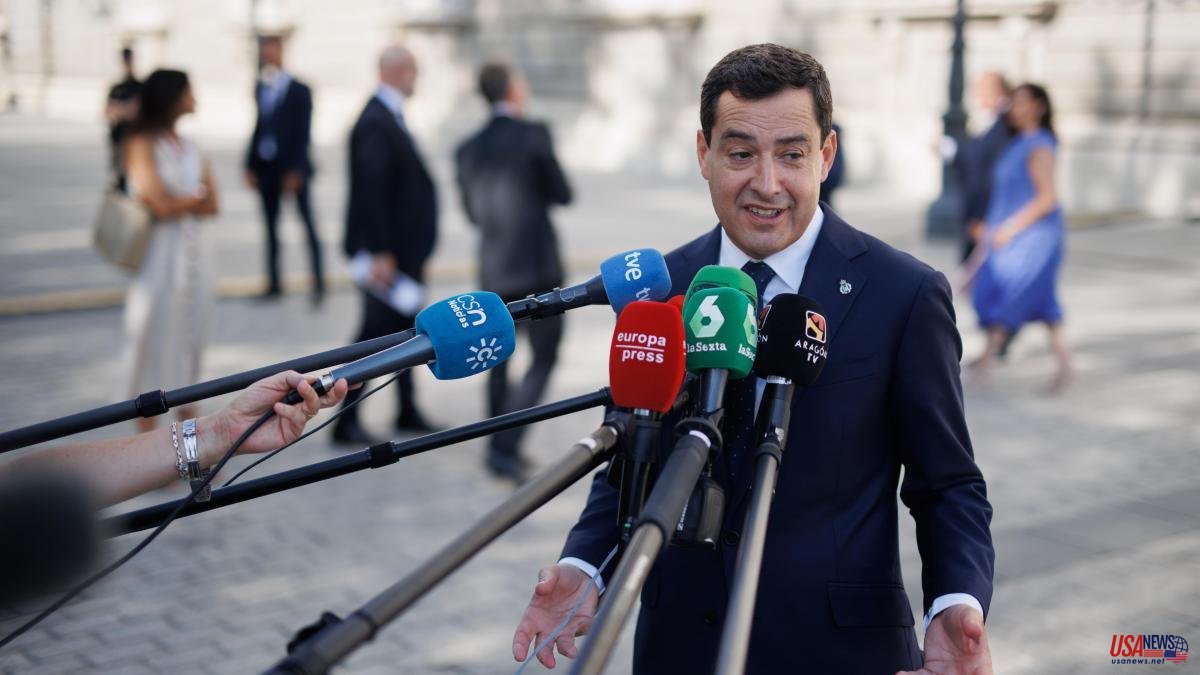 He says he is "trying to polish the structure" of the Government, where there will be names with experience that will be rescued from the previous legislature, but also new signings in order to "combine experience with freshness." This was stated today by the president-elect of the Junta de Andalucía, Juanma Moreno, who has also set the day on which she will take office on the calendar. He will be on Saturday, July 23, after the investiture debate, and he will be accompanied by Isabel Díaz Ayuso, the president of the Community of Madrid.

"We have to refresh this government to be able to take on the challenges that lie ahead, which are complex," Moreno declared today in Madrid, as far as he has traveled to participate in the State tribute that has been paid to the victims of the pandemic. Among the challenges that the population is facing, he highlighted the "hyperinflation that we are experiencing" and the "economic slowdown and a loss of opportunities, purchasing power and progress" that has as a consequence, not only for Andalusia, but for the whole of Spain and Europe.

If the Andalusian Parliament was constituted yesterday, after the Chamber Table was formed and the subsequent swearing or promise of the positions of the 109 deputies (58 from the PP; 30 that incorporates the PSOE; 14 more from Vox; 5 from Por Andalucía and 2 de Adelante Andalucía), work is already under way to hold the investiture debate next week, which will take place on Wednesday 20 and Thursday 21 July.

It will be on Saturday the 23rd when the popular leader takes office as president of the Board, thus constituting the first legislature where the PP has achieved an absolute majority in the region. With this, as the president-elect wanted, the deadlines set out in the Regulations have been shortened so that the new cabinet can be operational before the end of August. "Andalusia has no time to lose", the popular have said on several occasions.

The names that will accompany Moreno for the next four years at the head of the ministries, whose number has yet to be determined, remains unknown. The leader of the popular Andalusians has not wanted to advance anything, he has simply said that he will try to "combine experience and freshness" in the team since he wants to form "an effective government, in accordance with the needs of Andalusia".

The man from Malaga has advanced that he is "already working on future and possible directors", and in this regard he has confirmed that "some are going to repeat", but "other new people are also going to be incorporated, because I think that experience must be combined with freshness, with new equipment".

The XII Legislature in Andalusia began with a nod from the PP to Vox. The popular ceded one of the five positions of the Parliamentary Table, specifically the Third Vice Presidency, to the formation of the extreme right, a role that will be played by María Mercedes Rodríguez Tamayo, so that Abascal's party will have a voice and a vote in matters that are secretly debated in this body. Meanwhile, the PSOE occupies the two seats that correspond to it since it has refused to give up one of them in favor of Por Andalucía, a formation that also has a parliamentary group after the electoral results of 19-J but that will remain with a member ( with voice but no vote).

Moreno has assured that with this "gesture" he does not expect "any act of generosity" from Vox since, simply, he understood that the Table should be "plural" and that, despite having obtained the absolute majority, "it does not mean that we cannot give in and in the future agree”, for which he handed over a position to the third most voted force. In addition, he has criticized the attitude maintained by the socialists led by Juan Espadas for not wanting to cover "the entire parliamentary sphere" in this body.

Dialogue and consensus are the backbone of the new political time that Moreno wants to open. It is necessary, he said, that "the rest of the parliamentary groups understand that the people want us to agree, that we join, that we are stronger when we understand each other", and in this regard he offers "an outstretched hand for all the political forces", and hopes, wants, and wants to "trust" that the other groups understand that "an absolute majority does not mean absolute opposition", and carry out "an intelligent opposition, and thinking of the citizens".

"If not, I think it will be a mistake on their part," warned Moreno, who, on the other hand, has advanced that the act of his inauguration, scheduled for next Saturday, July 23, is "confirmed" initially the presence of the president of the Community of Madrid, Isabel Díaz Ayuso.