The paths of Joan Miró and Eduardo Chillida crossed in Paris at the end of the 1940s and separated in 1983. 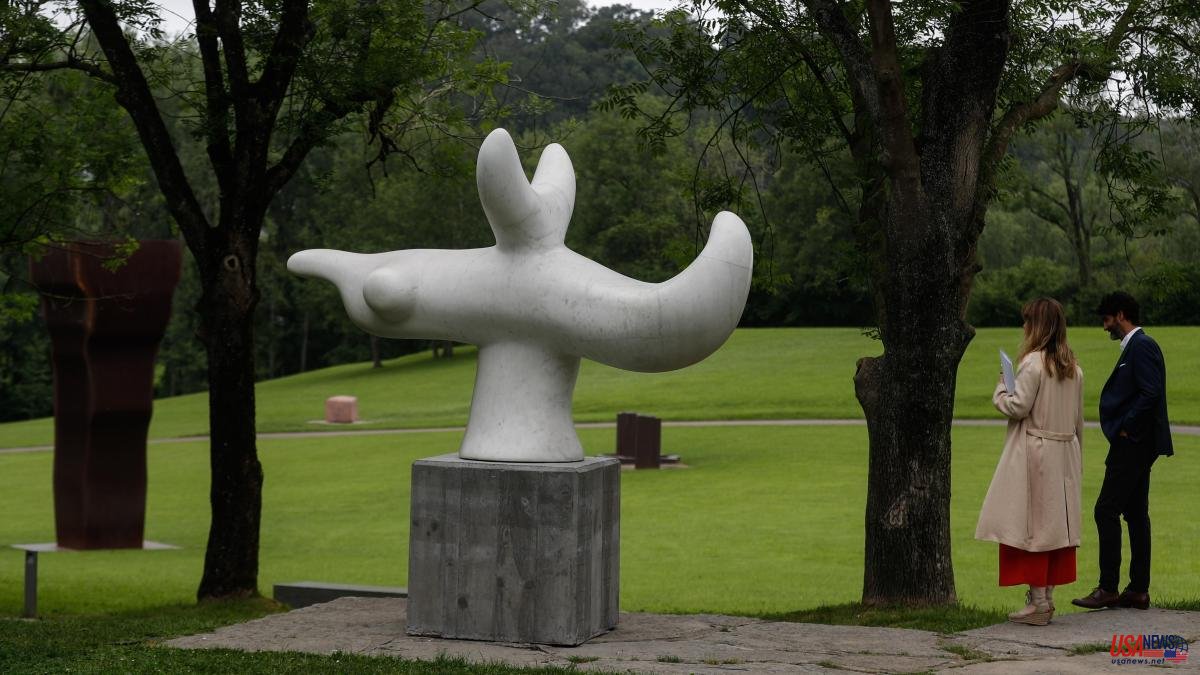 The paths of Joan Miró and Eduardo Chillida crossed in Paris at the end of the 1940s and separated in 1983. The artist from San Sebastian said goodbye to the Catalan genius with these words: “Thinking about him and his painting, Mozart's music assails me and the waves of the sea, which continually overflow, which follows one another like a continuum, always different. Miró is the same, he is a genius seized by art that the others will never be able to reach”.

In that year, the Basque sculptor and his wife, Pilar Belzunce, acquired the Zabalaga farmhouse, with the aim of fulfilling his great artistic dream: to find a space where his sculptures could rest and where “people would walk among them as if through a forest”. . Joan Miró could not meet him, although Luis Chillida, son of the Basque sculptor, is convinced that his father would have made him a part of that project. Now, four decades later, Chillida Leku is the scene of an exceptional dialogue that honors the friendship and admiration that united the two artists.

When their lives crossed in the French capital, they were going through very different vital and artistic moments. Miró was an already established artist, while Chillida, 30 years younger, was in full search. Their friendship was forged on the Côte d'Azur, in the summers in Saint-Paul-de-Vence, hand in hand with the Maeght foundation. In the last years of the Franco regime and during the Transition they took part in the particular political moment that Spain was experiencing and shared positions when it came to supporting manifestos and daughter initiatives of those years. “They always did their best to see each other and coincide. Now, this summer they are together again, the two of them and their two pillars (Belzunce and Juncosa)”, pointed out Luis Chillida.

The exhibition Miró in Zabalaga gives continuity to a line of programming that is committed to bringing guest artists closer and engaging in a dialogue with the works of the sculptor from San Sebastian; Miró takes over from the Antoni Tàpies exhibition. However, works by artists such as Louise Bourgeois or Thomas J. Price have also visited the museum located in Hernani.

In this case, the exhibition occupies part of the Chillida Leku gardens and three rooms of the Zabalaga farmhouse. Sponsored by the Iberdrola Foundation, the exhibition is made up of twenty sculptures from the Joan Miró Foundation; a tapestry from the Pilar i Joan Miró Foundation in Mallorca; the graphic work of the BBVA Collection and, finally, archives and graphic materials that reflect the intimate relationship that united them. It can be visited until November 1 and will be accompanied by an extensive parallel program of activities, including a piano concert by Alain Planés.

The exhibition has been designed based on Miró's Solar Bird (Oiseau solaire), a work from 1968 that can be seen from the entrance to the Chillida Leku site. “It invites the visitor to go up and discover”, explained Mireia Massagué, director of the museum. Outside the farmhouse you can find another monumental sculpture, Femme, located in front of the Zabalaga coat of arms and which is being exhibited outside the Foundation for the first time.

The great challenge of the exhibition, however, has been to combine the entry of Miró's color into the Zabalaga farmhouse, as explained by Estela Solana, head of exhibitions at Chillida Leku. They have opted for balance and gradation. “In the first room it is perceived, but nuanced”, she has indicated.

In this first space, the tour begins with two lithographs, Quelques fleurs pour des amis, from 1964, the first dedicated to Pierre and Patricia Matisse, and the second in homage to Aimé Maeght, who was the gallery owner of Chillida and Miró.

In the second room comes "an explosion of color." The tapestry Le Lézard aux plumes d'or, made by Josep Royo based on a lithograph by Miró, contributes to this, accompanied in the same room by several sculptures related to nature and another monumental bronze sculpture Femme, Monument, a homage to the feminine universe. In the third room, finally, there has been a commitment to “a flash of colours” through the graphic works of the BBVA Collection, which reflect “electric characters, in some cases intriguing and arrogant”.

In this same room, these more personal elements have been collected, reflecting that bond of union that began to be woven in Paris and accompanied them throughout their lives. A letter recalls the odyssey experienced by Chillida's La Sirena Varada and how the artist from San Sebastian chose to give it to Miró once the Madrid City Council declined to install it for political reasons. Years later it arrived at its current location, on the Paseo de la Castellana, with the prior permission of the Catalan artist. “The aita told them that it was no longer his, that they ask Miró for permission”, explained Luis Chillida.

Among these elements of a personal nature are also collected memories of the summers in Saint-Paul-de-Vence and, above all, texts that reflect their mutual admiration. Chillida said that Miró had convex lines and that he was “rather concave”. “One had a more Mediterranean way of being, and the other was more Atlantic and Basque”, pointed out Luis Chillida.

Some elements and experiences contributed to unite their artistic paths. "The feeling of belonging to their land, the experience in Paris in their youth, where they lived the influence of the artistic avant-garde each in their time, and the need to return to the origin are some common life experiences that marked both the sense of the work of Joan Miró and that of Eduardo Chillida", Solana pointed out.

And above all they shared a sincere friendship and deep admiration. “Shortly after meeting her, I noticed in her eyes her ability to think through her eyes. He was a Miró-voyeur, one of those who see when they look, and also a delicious, humane, pleasant and supportive person”, Chillida honored him after her death, with the dream of Chillida Leku still in the making. Now, the Miró exhibition in Zabalaga closes "the circle of an artistic dialogue".