Mbappé's frustration, a hurricane without a prize

The presentation was as follows: The anthem of La Marseillaise sounded in the Lusail stadium. 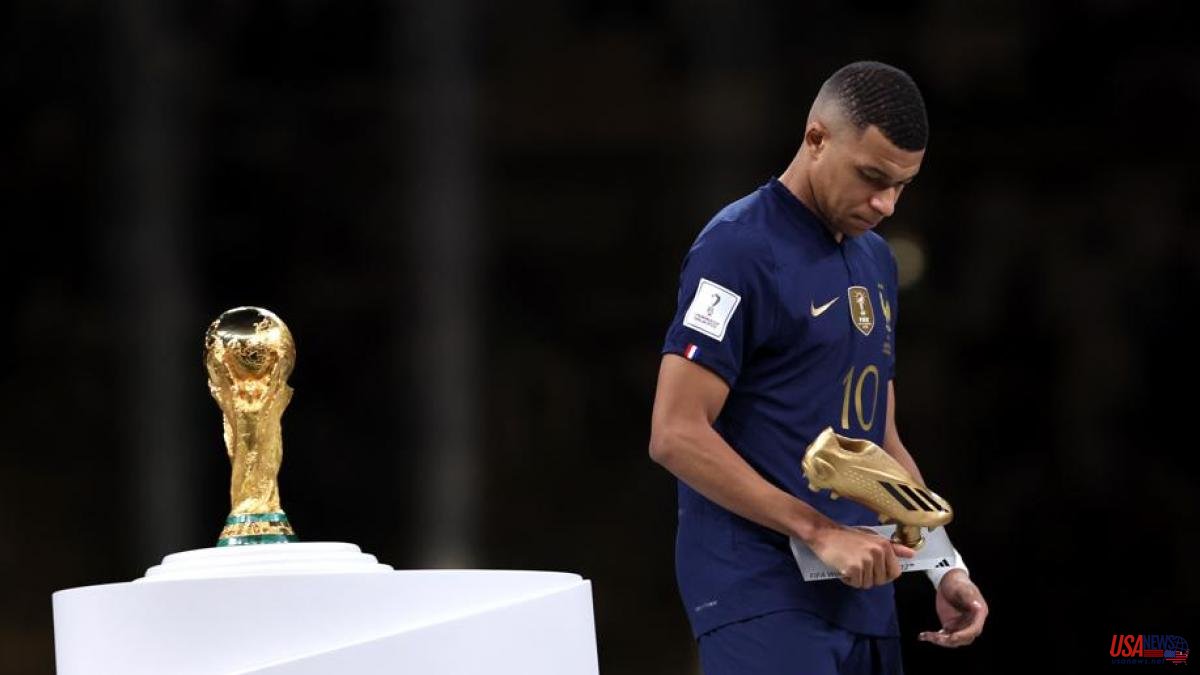 The presentation was as follows: The anthem of La Marseillaise sounded in the Lusail stadium. There was the privileged Kylian Mbappé. That boy who grew up in the humble Bondy on the Parisian outskirts and who has always shown himself to be gifted with the ball, smiled visibly relaxed while humming his country's anthem. Total, at 23 years old he and the turbines that he has for legs already had the throne that Messi, at 35, had been looking for all his life. He seemed confident in having the possibility of adding his second crown. But not. Messi's Argentina was in charge of erasing his smile. Never scoring a hat-trick and hitting the penalty shootout served so little. And Mbappé, who will turn 24 tomorrow, Tuesday, will have to continue chasing Pelé, who when he was his age already had two of the three World Cups he won with Brazil.

Kylian probably paid dearly to start the game without being Mbappé. Conservative and without sparkle due to a decaffeinated left wing in his only intervention in the first half, he barely captured a wall attempt with Rabiot, which ended with Dibu Martínez coming out at the feet of the PSG star. And France, despite having players like Griezmann, more than paid for the scarce presence of his star. Less smiling. More and more frustrated. Five minutes before the break Deschamps took the board from him and with it Dembélé. The penalty took its toll on the Barcelona striker. And Mbappé left the left wing to take up the lead. Trying to recover that freedom that Argentina had denied him. He did not make it and quickly went to the locker room with his head down. His smile was already a distant memory.

Things did not improve at the start of the second half. Kylian was still not Mbappé. Proof of this was the kick that he gave Enzo Fernández from behind. A kick that exuded frustration on all four sides. The good of the collegiate Marciniak forgave him the card. The swing of his emotions, all negative, resulted in a strong shot too high in his first action of some danger. A scream of rage erupted from within him.

And everything changed. The wind began to blow in her favor. And Kylian reset himself to start being Mbappé for ten intense minutes that served well for France to force a dream extension. A penalty from Otamendi against Kolo Muani opened the ban. The French crack did not fail, who angrily deceived Dibu Martínez to score the first goal for the blues. Never a goal was so vitamin.

Mbappé picked up the ball, snorted and recovered the smile he wore singing La Marseillaise and in two minutes the excellent collective play by France ended. He hit a volley that allowed him to get around Dibu Martínez to tie the game and force extra time. He smiled defiantly. The referee whistled the end. And while Deschamps gave instructions to his players, the French physiotherapists massaged the French star. Thinking that he had to rewrite the ending. Convinced that with his legs finally transformed into turbines he could find the way.

He was not wrong by a bit. The script still reserved one last surprising twist for him. After Messi's second goal, the albiceleste's third, Mbappé found his best ally in Montiel. The Argentine took an innocent but lethal elbow for a walk. Marciniak awarded a penalty and Mbappé deceived Dibu again, scoring the third with a studied right hand. His eighth goal in the seven matches of this World Cup. Two doubles and yesterday's hat-trick. Only the Englishman Geoff Hurst had managed to score three goals in a final. And it's been a long time. It was in 1966 against Germany.

The difference is that Hurst won that World Cup with England. And Mbappé, who also hit the first shot of the penalty shootout, resignedly picked up the World Cup Golden Boot first and then the medal for seconds. Out of the corner of his eye he observed the World Cup. Unlike Messi, he will have more options to raise it again.