The casual gift of a bicycle when he was already 17 years old changed the life of Julio Jiménez and took him away from his occupation in a watch shop that his cousin had in Ávila to direct him towards the great mountain peaks. 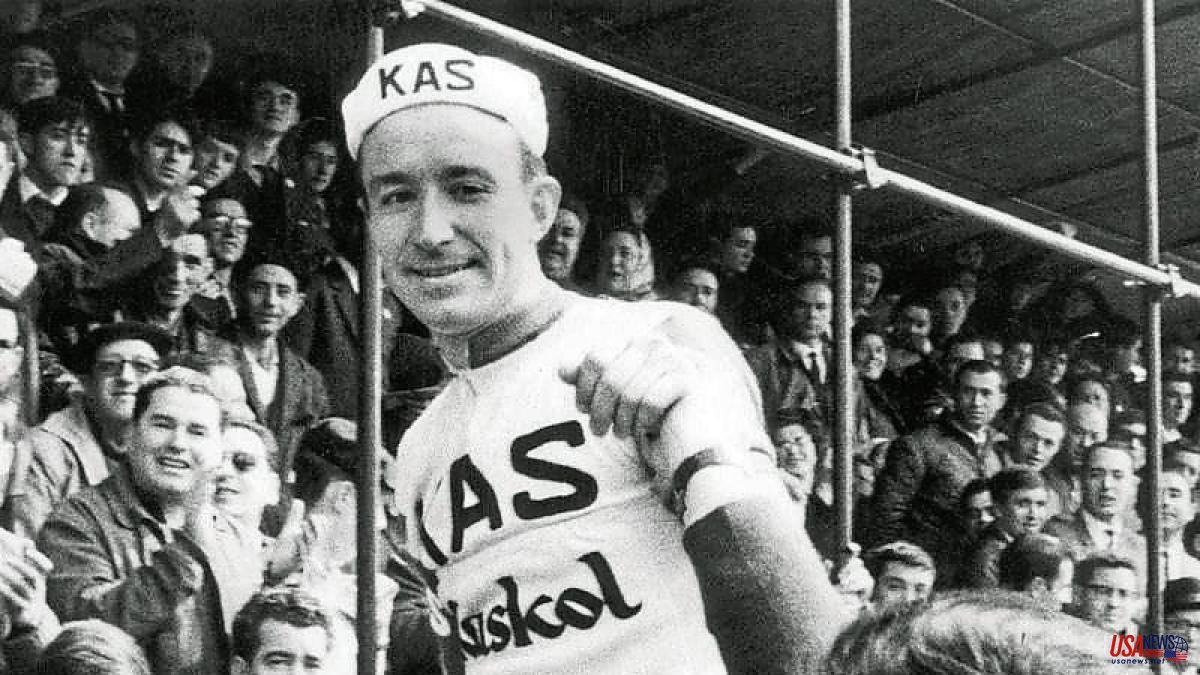 The casual gift of a bicycle when he was already 17 years old changed the life of Julio Jiménez and took him away from his occupation in a watch shop that his cousin had in Ávila to direct him towards the great mountain peaks. He was a sensational climber, three times mountain champion of the Tour (1965, 66 and 67) and another three times in the Vuelta (1963, 64 and 65) when this prize was not tied by sprinting in third grades.

Between 1959 and 1969, his years of greatest splendour, he disputed 14 Grand Tours. He finished them all and won 12 luxury stages: three in the Vuelta a España, four in the Giro d'Italia and no less than five in the Tour de France, a mark only surpassed among the Spanish by Indurain, Ocaña and Bahamontes. And that Jiménez did not make his debut in the French tour until 1964, when he was almost 30 years old, but he had time to reach an excellent second place (1967) and to win stages of indelible memory, especially the one that in 1964 ended at the summit of Puy de Dôme, a day that has gone down in history for the shoulder-to-shoulder battle between Jacques Anquetil and Raymond Poulidor. But the one who won that day was him, the watchmaker from Ávila, as they distinguished him in his cycling race. The simple relationship of his other four victories in the Tour, in Andorra, Bagnères de Bigorre, Aix-les-Bains and Briançon, certify his race climber's license, both in the Pyrenees and in the Alps.

The first outstanding successes were scored by Jiménez in the Volta a Catalunya, with the stage he won in 1960, in Puigcerdà, and the one in 1962, in Argentona. It was Anquetil in person who later wanted to incorporate him into his team and after going through Faema and Kas he ended up at Ford-France and later at Bic. Julio Jiménez had the 1966 Giro d'Italia within reach, when he was in the best moment of his career. He seized the pink jersey in the second stage, a day of just 60 kilometers with three climbs and a hilltop finish, and held the lead until the thirteenth, a 46-kilometer time trial in Parma. Years later he would admit that he made a mistake in the strategy: “Anquetil recommended that I give up the pink jersey, that other teams work and I would get it back. I didn't listen to him and I regretted it, that's why I lost the race”.

Julio Jiménez, unlike many of his contemporaries in Spanish cycling at the time, did not always justify his bad days with strange arguments nor did he see ghosts in all the performances of his teammates.

He was a kind and open athlete to remember the passages of his career with longing, but with an impartial point of analysis. Thus, on the 1964 Tour he remembered the great Pyrenean day of July 8, from Luchon to Pau with the circle of death included: Peyresourde, Aspin, Tourmalet and Soulor-Aubisque. He escaped with Bahamontes, since both were fighting for the mountain prize. Through the Tourmalet they had a lead of more than 7 minutes, but Julito had a bad moment “and Bahamontes didn't want to wait for me, he went alone. If we collaborated that day he would have won the Tour. But when he went alone he did not get all the necessary income, he did not earn it because he was selfish...”.

Julio Jiménez died at the age of 87 after being unable to overcome the injuries sustained in a traffic accident last Tuesday at noon in the streets of Ávila. The vehicle, which he was not driving and in which two other elderly people were travelling, collided with a wall, apparently due to an error in the use of the automatic gearbox, when they were leaving a car wash run by another famous former cyclist. Angel Arroyo. The death of the great climber has been especially mourned in Ávila, where a street bears his name, Cuesta de Julio Jiménez. There, two days of official mourning were decreed and a burning chapel was installed in an emblematic building in the capital of Avila.