The writer Joan-Lluís Lluís (Perpignan, 1963) is helped by his readers to understand his own novels, he walks with his characters and a complete “platonic lover of languages”. 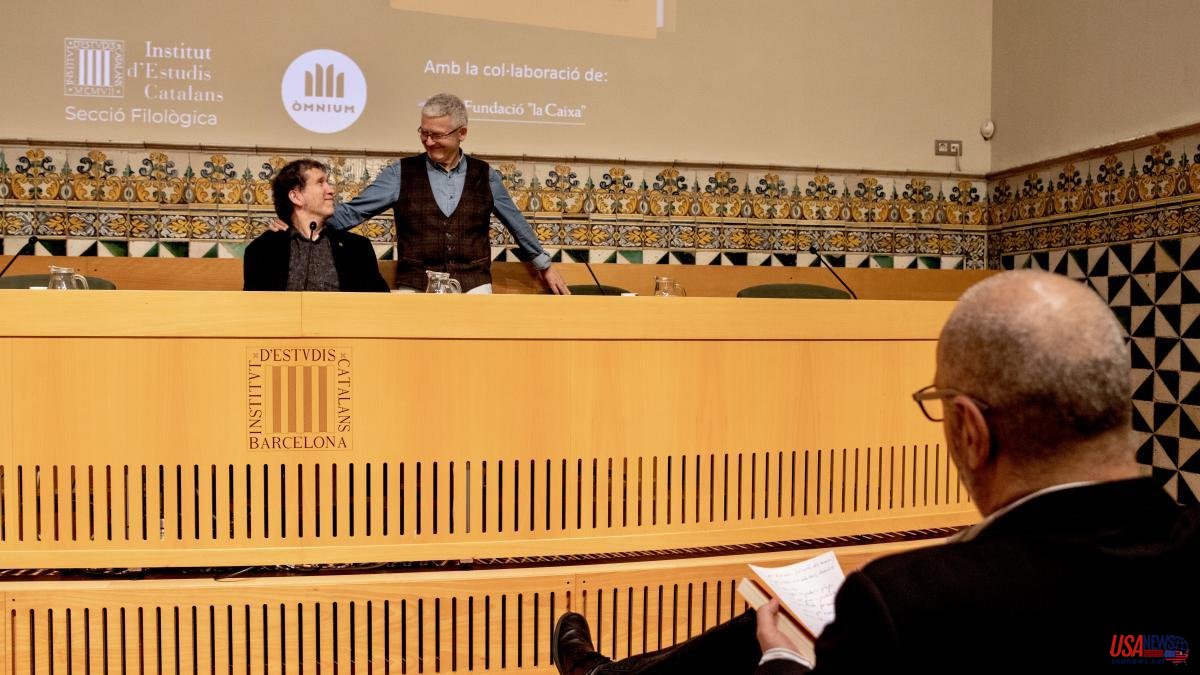 The writer Joan-Lluís Lluís (Perpignan, 1963) is helped by his readers to understand his own novels, he walks with his characters and a complete “platonic lover of languages”. His Junil a les terres dels bàrbars (Club Editor), which complies with the three previous statements, won the Òmnium 2021 award for the best novel of the year. Winning it was "like an oxygen bubble", Lluís stated at the ceremony The Òmnium award «passes examination» at the IEC, held yesterday afternoon in the Prat de la Riba room of the Institut d'Estudis Catalans (IEC). But far from examining the winner, the event was a conversation between the author, his editor, Maria Bohigas, and Màrius Serra and Magí Camps, members of the IEC's Philological Section, about Junil, his creative process and the way in which the Roussillon writer understands literature.

In the presentation of the event, Nicolau Dols, president of the Institut's Philological Section, valued the novel as "a book about languages ​​and reading". "If language makes us human, writing makes civilization," he recalled. For her part, the journalist Natza Farré, a member of the board of Òmnium Cultural, explained that the prize awarded by the entity "is a way of believing in our own literature, in a big way, truly and without complexes." “As a civil society we have to continue giving prestige to Catalan letters”, declared Farré, who also claimed that Catalan, beyond literature, has to be defended “in the audiovisual, the cinema, the schools and the streets”.

The event continued with a dialogue between Màrius Serra and Joan-Lluís Lluís, in which the author recognized some of his obsessions and passions reflected in Junil a les terres dels bàrbars. He confessed his “inconsiderate and platonic love for the Greco-Roman world” and his predilection for oral literature. "It's my world, where I feel comfortable, because the real world scares me a little." Likewise, he shares the fascination of Junil, the protagonist of his novel, for Ovid. Because, although the story is set in the Roman Empire, Junil is still "a reader who falls in love with an author like in the sixties there were girls in love with the Beatles." "Junil discovers literature as a world parallel to reality, much more welcoming and pleasant," said the writer.

However, the Roussillon author insisted that it is not a historical novel. "I don't do a reconstruction, because I'm not interested and I don't know how to do it," he stressed. On the contrary, Junil "has more to do with the fable than with the novel", so he preferred to "dispense with any historical accuracy and invent towns, invent their way of speaking". Thus, he chose to make a “choral novel, of people who run because they flee”, like a “Via Appia movie”, joked Màrius Serra. Among this "utopian group" that stars in the play, Lluís became just another walker. "He was the last of all and he looked at how they are and what they do."

In this 97th presentation that the author makes from Junil to the terres dels bàrbars, Magí Camps, who was also the first to interview him after the publication of the novel, considered that “it is a book that makes a great defense of translation” , where the writer is a chronicler who appears referenced in the work. "More than a praise of the translation, it is a defense of mutual understanding, and this happens through the translation," replied the author.

The speakers then reviewed, together with the editor Maria Bohigas, the author's literary career. “At the age of 13, I decided from the greatest naivete in the world that I wanted to write,” said Lluís. “At 16 I realize that the French school has told me lies about what it is to be Catalan, that is, nothing, a residual, old thing, which there is no need to talk about”. Later, he tried his luck in literature writing in French, but he saw “that it was contradictory”. So he changed his language. “Knowing a little Catalan will be a virtue, because I will always have to look for the exact word”, he decided.

About his editor, Joan-Lluís Lluís accepted that "his ability to enter a text is fierce, implacable". "This is good for a text, but not necessarily for the author," he acknowledged. Bohigas, who shares a French education with the author, explained that there was a time when he also had to "decide to write in Catalan." "With Joan-Lluís Lluís, I have wanted to learn to be light, to intervene little so that the author completes the path alone", the editor concluded.