There was a time when the scoring records of Leo Messi and Cristiano Ronaldo amazed the entire planet. 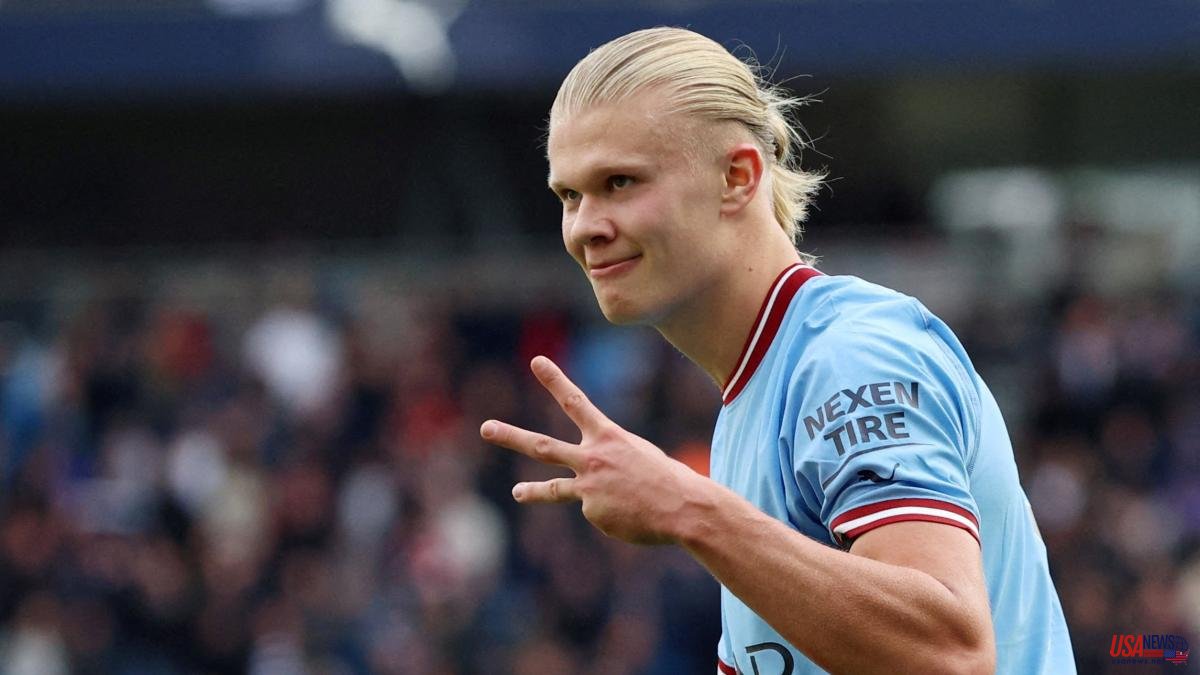 There was a time when the scoring records of Leo Messi and Cristiano Ronaldo amazed the entire planet. They seemed unrepeatable, incomparable. The rivalry between the cracks of Barça and Madrid to prevail over the other in quantitative terms had no ceiling. That competition made them and their teams better. From England they watched him reluctantly from the sidelines. In a league as even and tough as the Premier League it was unthinkable to see something similar, they thought. Even with the two best footballers of the moment. A perception that has completely changed since Erling Haaland's landing this season.

The Manchester City striker is on his way to inscribing his name in capital letters in the history of the beautiful game. The month of October has only just begun and he already has the country that regulated football surrendered at his feet. The last exhibition took place in the best possible scenario: a Manchester derby in which he once again displayed his killer instinct to finish off United (6-3) with his third consecutive hat-trick at home, a fact overwhelming. It is unknown if Haaland is real or part of the metaverse.

To put this milestone into perspective, they are the same ones that Cristiano has achieved in his eight seasons in England. Haaland has only needed eight days. In the history of the Premier, the record was held by Michael Owen, when he achieved three hat-tricks in 48 games. Yesterday at the Etihad, Cristiano watched from the United bench –he did not play a single minute- the monstrosity of his heir to the goal, a Haaland who also distributed two assists to Phil Foden, author of another hat-trick.

The Norwegian scored the first with a header and the other two with his left foot. With them he already has 17 goals in 11 games for City in all competitions; 14 goals in the Premier –only one from a penalty-. Only in the league has he seen more goals than 14 English teams, including Chelsea or United itself. In Europe he is not surpassed by clubs from the entity of Juventus, Atlético de Madrid or Borussia Dortmund, his former team.

Since he stamped his signature with the team led by Pep Guardiola, the first Mancunian derby had been marked in red. Haaland's affinity with City goes back to his childhood, when he encouraged his father dressed in light blue until in 2001 Roy Keane ended the career of Alf-Inge Haaland, with a hard tackle in the derby that he intended to settle pending accounts. Although Erling has never wanted to comment on that criminal act of the Irishman, somehow he got his revenge yesterday. In 56 days with City he is already four goals away from equaling his father, who needed seven seasons.

Haaland does not need to intervene too much in the game to be decisive. The second-youngest footballer to score in his first Manchester derby – second only to Mario Balotelli – drills nets every 13.6 touches. His effectiveness is also tremendous: 14 goals in the Premier in just 33 shots, 20 of which on goal. As surprising data, so far in the domestic championship he has only fallen offside twice, very little in the case of a striker who constantly throws unchecks.

Haaland's ideal partner is Kevin De Bruyne. The Belgian, top assister in the major leagues with ten goal assists, has distributed half to Haaland, the continent's most prolific scorer. Only Robert Lewandowski (12) with his goals at Barça can overshadow him.

His figures at the international level are also devastating despite being only 22 years old. Already in a U-20 World Cup he made himself known by scoring nine goals against Honduras. Nobody in the history of the World Cups of any category had reached that figure in a single match. That was only the beginning. The idyll with the Champions has existed since his first game, when in his debut he scored a hat-trick with Red Bull Salzburg. He was 19 years old.

After his time at Dortmund and his first games with City in Europe's top competition, Haaland has scored 26 goals in 21 Champions League games, light years ahead of what Messi and Cristiano did in their first appearances in the tournament. With that same number of games, Rosario had only added eight goals. The Portuguese, the competition's all-time top scorer with 140 goals, had not even made his debut. His contemporary Mbappé, who had broken into playing for Monaco at just 16 years old, only scored 12 goals in those same games.

Haaland's precocity allows him to aspire to all goalscoring records. This season he has several challenges ahead of him. One of the most striking is becoming the all-time leading scorer in the Premier League. The current record has been shared since the nineties by Andy Cole and Alan Shearer, with 34 goals; yes, when they played 42 days. In the 20-team league, the best record is held by Mohamed Salah (32).

Haaland's figures in the Premier will ridicule some of the top scorers of the past. There were two seasons in which they did not exceed 18 in a season. In the last one, Salah and Son tied with 24.

If he maintains the current goalscoring rhythm, the calculations shoot him up to 70 goals in the Premier, never seen before. The scoring record ever broken in English football is Dixie Dean's 60 goals in an Everton shirt almost a century ago (1927/28). In a closer time, the closest thing is Messi's 50 goals in the 2011/12 League.

Without World Cup as Norway is not qualified, the giant of the fjords will face the second part of the season more rested than most international stars. City will appreciate it.