Gavi reigns among the Barcelona youth 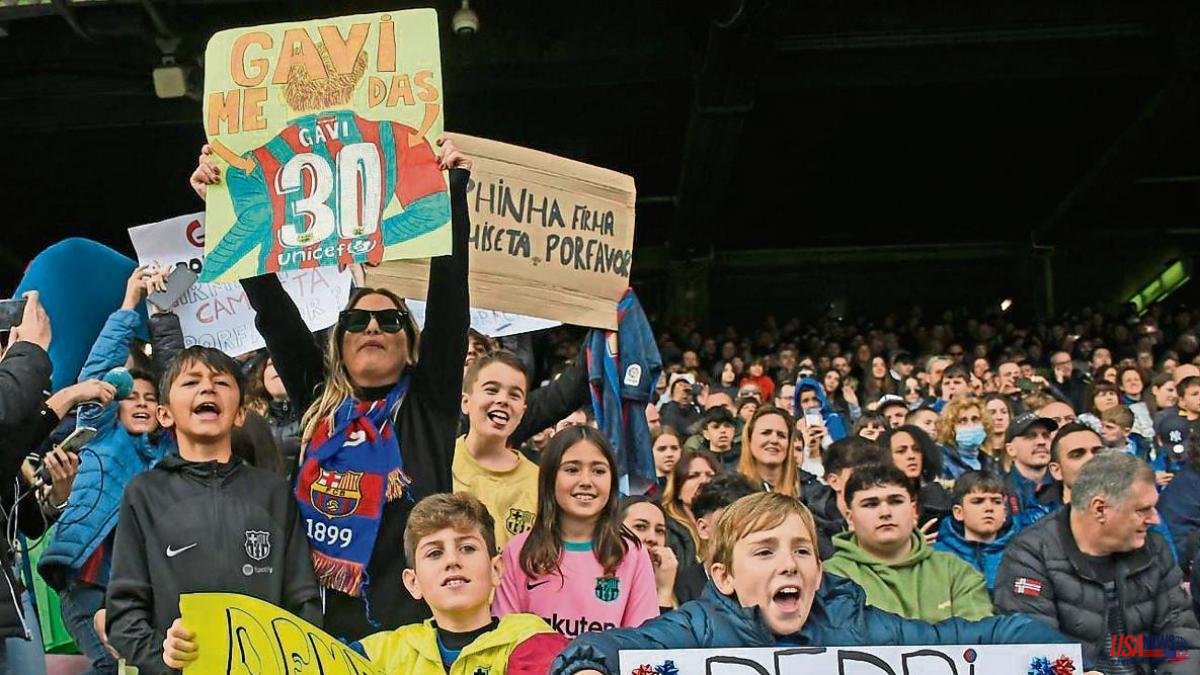 In 1993, Pep Guardiola walked the 080 runway for Antonio Miró. Months after winning the European Cup and Olympic gold, he jumped to the benchmark of his generation. He was 22 years old. He later succeeded him with Bojan, author of 12 goals in his first season in the first team, at the age of 18. It was Rijkaard's last course. “He is the son of Catalonia”, Thierry Henry defined him. Pedri is raffled off by the brands, but the new adolescent and youth phenomenon of Barcelona is called Pablo Páez and in football terms he is known as Gavi.

How could it be otherwise, the Andalusian midfielder was the most acclaimed and chanted by the 15,324 supporters who filled the stands of the Camp Nou in the traditional open-door training session. Being able to see up close, from a privileged place, from the front line, a work session of your idols is an early gift from Kings for the most innocent culés. It was the day for children and young people, and there, with those of his age, Gavi has no rival, and he does not lack competition in the dressing room with Eric Garcia, Pedri himself, Balde or Pablo Torre.

The boy still hasn't gotten his driver's license, but it's in the folders of the teenagers, and his name appeared on many of the homemade banners. "Sign my shirt" or "Will you give me your shirt?", They asked him on cardboard full of hearts. In the stands, a life-size cardboard doll with his photograph was even seen. He unleashes passions.

At the World Cup in Qatar, where he became the youngest Spaniard to score a goal in a World Cup, at the age of 18 years and 110 days (against Costa Rica), Gavi was seen dedicating a shirt with the number 9 – the one he used in the selection– and hand it over to King Felipe VI. One of the two daughters of the Monarch is a big fan of the interior of Barcelona.

The Blaugrana club didn't take long to realize the pull of the Andalusian, with 12.6 million followers on Instagram (almost the same as Ter Stegen and three million more than Pedri, for example). In August, Barcelona devised an act tailored to him in the Camp Nou Botiga for him to sign autographs and take pictures with the fans to celebrate his renewal until 2026 with a clause of 1,000 million.

A key player on the pitch, for passion, intensity and drive, where he has played 67 games in a season and a half since he made his debut (plus 17 with Spain), Xavi Hernández did not lose detail of his physical condition in training, where Gavi, recovered from the blow to the hip that forced him to retire in the derby, to find out if he can count on him tomorrow in the Copa del Rey against Intercity in Alicante in a single-match tie.

It is no coincidence either that in one of the two rounds that were formed in the warm-up, five of the most important came together and that they like and connect with the fans the most, such as De Jong, Lewandowski, Pedri, Ansu Fati and, obviously, Gavi , symbol of the new times, turned into the fourth wise man, which delighted the enthusiastic spectators.

For the Blaugrana, the atmosphere was a plus of energy before starting a series that could be five games away from their people between the Cup, League (Atlético) and Super Cup. They will not return to the Camp Nou until the 22nd. The proceeds from the charity event, with tickets ranging from three to six euros, went to benefit the Robots project of the Fundació's Pediatric Well-being Program.