EXPLAINER: What does PM’s reinstatement mean for Sudan?

Although the largest concession the military made since the Oct. 25 coup was to reinstate Sudan's prime Minister, it still leaves the country in crisis and its transition to democracy in turmoil. 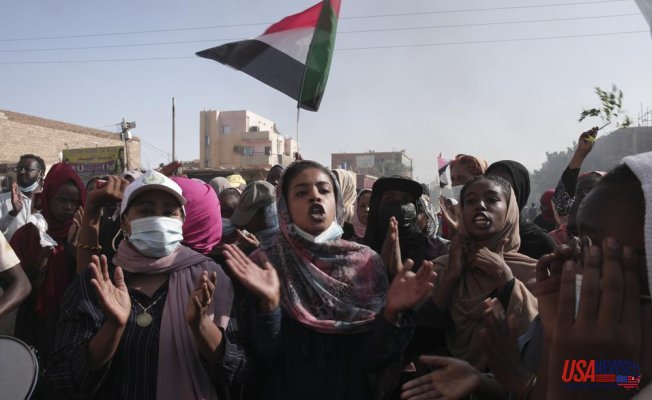 Although the largest concession the military made since the Oct. 25 coup was to reinstate Sudan's prime Minister, it still leaves the country in crisis and its transition to democracy in turmoil.

On Sunday, the military reached an agreement with Abdalla Hamdok that would allow him to be reappointed as head of a new technocratic Cabinet in advance of possible elections. The agreement angered Sudan's pro democracy movement, who accuse Hamdok of serving as a cover for military rule.

The coup was condemned by most of the international community, who called for at least partial civilian rule. As the country emerges from decades under isolation, President Omar al-Bashir was overthrown in protests in 2019. The United States stopped aid to the cash-strapped nation.

Forces for the Declaration of Freedom and Change is an umbrella group of Sudanese pro-democracy and political parties. It has rejected the agreement and said it is committed to ending military rule.

The military is cautious about giving power to civilians. This could make top brass more vulnerable to being charged for human rights violations dating back decades or weaken the generals' hold on lucrative economic sectors.

Let's take a look at the past and see what lies ahead.

The military had to do something.

Since taking full power on October 25, Gen. Abdel-Fattah Burhan is under increasing pressure. Arab, African, and Western nations have called for civilian rule . The U.S. has stopped $700 million in aid because it strongly condemned this coup.

Protesters have taken to the streets in one of the largest demonstrations since the end of al-Bashir’s three-decade rule in 2019. Security forces have also killed more than 40 protestors since the coup.

Generals have described the reinstatement Hamdok's as a step towards stabilizing the country before elections scheduled for July 2023. The international community has cautiously accepted the agreement. The Sudan's pro-democracy group has angrily rejected this deal as legitimizing the coup, and has pledged to continue mounting mass protests.

CAN THE REINSTATEMENT DURING SUDAN'S PRIMEMINSTER RECOGNIZE THE COUP?

The military maintains total control. By imposing a technocratic Cabinet and further marginalizing Sudan's political parties as well as the pro-democracy protest movement, the agreement also allows for the military to retain overall control.

Jihad Mashamoun, an analyst and researcher from Sudan, said that "I don’t believe it’s possible for Hamdok’s government to function at any level because it doesn’t have recognition in the streets."

The Sudanese Professionals Association, which led protests against el Bashir, has condemned the new agreement as an attempt at legitimizing the coup. Local Resistance Committees played a crucial role in the recent protests and are now demanding that the military quit politics.

According to the military, there will not be a return to the power-sharing government in place before Oct. 25, which was fraught with internal rivalries. This coup occurred weeks before the military was supposed give power to civilians.

WHAT DO THE SUDANESE MILITARY WANT?

It wants to at least protect itself.

A elected government would likely pursue generals for human rights violations. This includes those committed during al Bashir's scorched earth campaigns against Darfur rebels. The international criminal court also charged him with genocide. They may also be charged with the recent killings of protesters.

The military is also concerned about losing control of mining and other important economic sectors.

Alex de Waal, a Tufts University expert on Sudan, said that Hamdok could end up being the man at the cash register selling snacks, matches, and soap while the real drug dealers are in the back. "The coup was orchestrated to protect the kleptocrats and the army clearly intends to make the new formula a return to money-laundering operations with a more respectable face."

WHERE DOES SUDAN'S INTERNATIONAL COMUNITY STAND?

Although the coup was widely condemned internationally, the generals still have influential friends.

Since the uprising against al Bashir, the United Arab Emirates, Saudi Arabia, and Egypt have maintained close ties to Burhan. They likely view the generals as their best hope for maintaining a stable and friendly government in Khartoum.

They are seen by the wealthy Gulf states as a buffer against rivals such as Turkey and Qatar. Sudan is expected to support Egypt in the long-running dispute it has with Ethiopia over the construction a huge upstream dam on Nile.

Israel is also considered a potential ally for the generals. They were the driving force behind Sudan normalizing relations last year in return for being removed from the U.S. state sponsor of terrorism list. Hamdok voiced concern before the normalization agreement. This is part of the "Abraham Accords" and states that a major foreign policy shift should only be made by an elected government.

Walla, Israel's news website, reported that an Israeli delegation met Sudan's generals just days after the coup. The Israeli government has not commented about the coup and its aftermath.

Mashamoun stated that the U.S. and its allies desired a partnership. However, the people do not want any partnership. They want civilian rule. "The international community must listen to the people's demands."

ISN'T THERE ANY HOPE IN SUDAN FOR DEMOCRATIC TRANSITION?

Both paths to democracy seem to be fraught.

Hamdok could work with the generals in order to make way for elections. He might also leverage his position and international support to help get the political transition back on the right track. However, this likely means that there will be a return of the tug-of war from the past two years which has strained both sides.

Pro-democracy activists have pledged to continue street protests until civilian power is handed over to the military. However, the generals have much to lose and a prolonged standoff could spark wider unrest.

"The outcome might be democracy, but it is more likely that it would be state fragmentation. De Waal stated that a compromise was necessary. Although the compromise to restore Hamdok is not very good, there are still possibilities to improve it.