Draghi resigns again after losing the support of his partners

The former president of the European Central Bank (ECB), Mario Draghi, this morning presented his resignation as prime minister for the second time before President Sergio Mattarella. 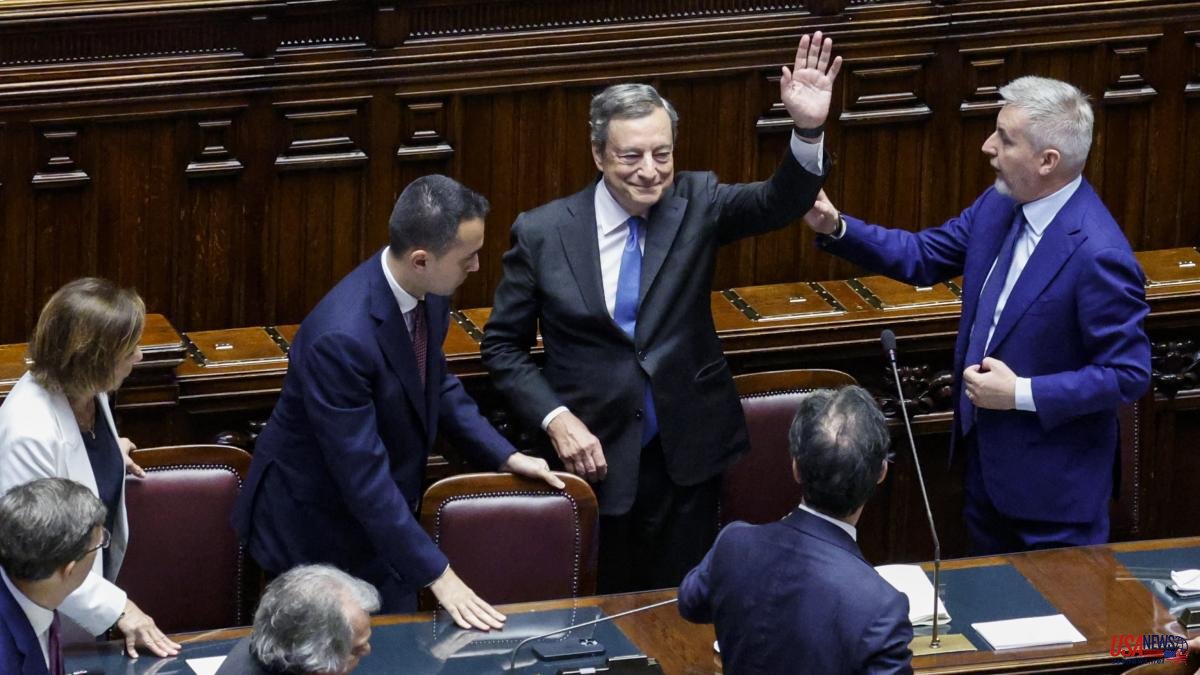 The former president of the European Central Bank (ECB), Mario Draghi, this morning presented his resignation as prime minister for the second time before President Sergio Mattarella. This time, irrevocably. The betrayal suffered yesterday in the Senate by the 5-Star Movement (M5E), Matteo Salvini's League and Silvio Berlusconi's Forza Italia has left him with no choice but to renounce the leadership of the country, despite the great pressure both in Europe as in Italy to continue they had convinced him to try again.

With a much more relaxed face than yesterday in the Senate, Draghi appeared before the Chamber of Deputies, fulfilling the parliamentary rite, where he received a long standing ovation from the deputies present. "Thank you. Sometimes we central bankers also have hearts”, he said, moved, recalling a joke about bankers without feelings that he explained at a recent dinner with correspondents in Rome.

On this occasion, the economist's speech has been concise: given the poor result obtained yesterday in the Upper House, he ended the session and went to the Quirinal Palace, seat of the Presidency of the Republic, to communicate his intentions. Immediately afterwards, the prime minister crossed the center of Rome by car to resign in Mattarella's study.

Draghi will not step down immediately, but will remain in charge of ordinary business until his successor is chosen. Now the next steps of the Italian dance are the responsibility of President Mattarella, the same one who had begged him to re-intern him so that Italy would not enter into uncertainty in an international situation as delicate as the current one.

Mattarella could directly decide that, given the closeness of the end of the legislature – its expiration date is March 2023 – the Chambers are dissolved and elections go to as soon as possible. The first useful date would be October 2. Another option is that he refuses to send the country to the polls in this situation and opts for some other more complicated solution, such as asking another technician to try to form a minimum government. For the moment, the head of state has summoned the presidents of the Chambers this afternoon to evaluate the situation.

The fall of the Draghi government comes after a political crisis caused by the rudeness of the M5E in a vote of confidence last week. But Salvini and Berlusconi's right have taken advantage of the confusion to try to force an early election that will surely greatly benefit their coalition. The most satisfied is Giorgia Meloni, from Brothers of Italy, who was already campaigning last night.

The first collateral effects are already arriving. It's not just the M5E that is on the verge of another implosion. Berlusconi is also losing important pieces of his political project. Minister Mariastella Gelmini announced yesterday that she was leaving Forza Italia. Today she has been followed by Renato Brunetta, a partner of Il Cavaliere for twenty years, who believes that by abandoning Draghi the party has "betrayed its history and its values".