"There will be fireworks," Novak Djokovic (35) had announced on Friday. 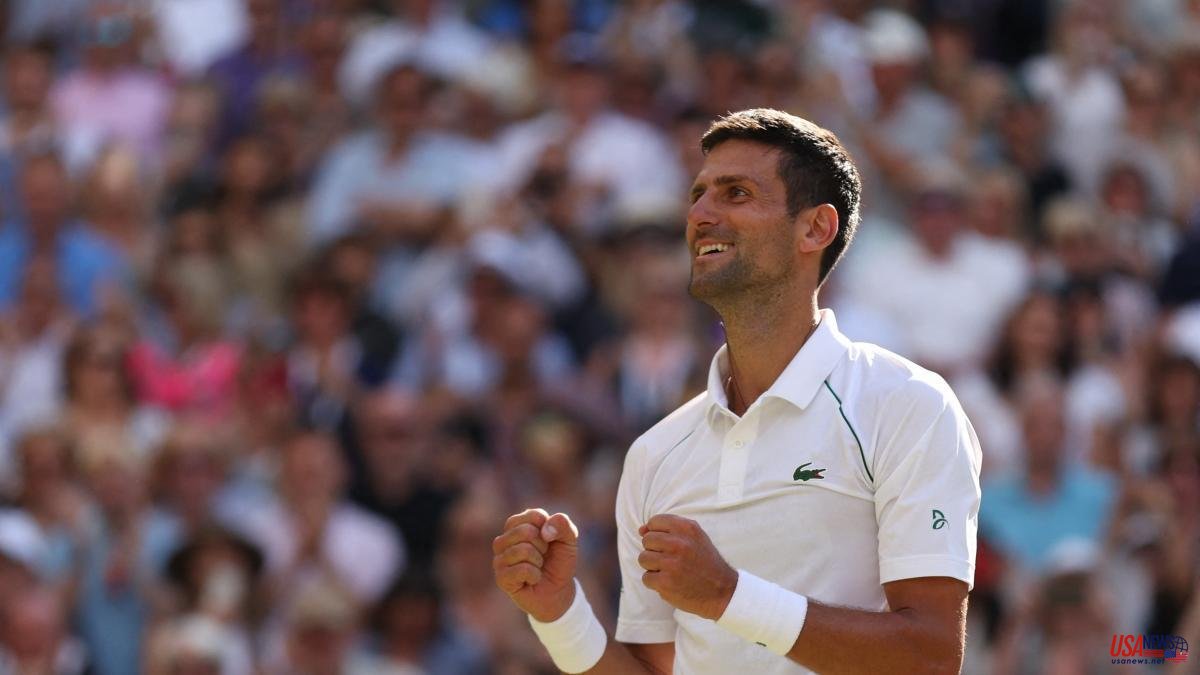 "There will be fireworks," Novak Djokovic (35) had announced on Friday.

And as soon as it's his turn to serve, Nick Kyrgios (27) executes a spoon serve. This is the reading: Djokovic will be a legend, but Kyrgios does not intend to respect him. The Serbian solves that first set, because he has written down that possibility on the agenda. He is attentive and runs vertically and responds to the deception.

But first, the parish goes crazy.

Fireworks in the cathedral!

It can't get any hotter in London, and not a pin will fit in Center Court. Wimbledon has hung the poster:

The All England Lawn Tennis Club has exceeded capacity. The Hill, the hill with views of the central court screens, looks like a Benidorm beach in August. More than 42,000 souls have climbed into limousines or the Underground, turned up at Southfields station and from there made the pleasant fifteen-hour walk to the club: they walked looking at the Victorian houses with gabled roofs and the magnificent countryside with ponds and geese. Pamelas and hats abound, the stands are dyed white. It is the Wimbledon final in its centenary year.

Everyone senses what Djokovic we will see: professional and committed, a man facing his destiny, a tennis player who is pursuing his fourth Wimbledon in a row, his 21st major (one more than Federer, one less than Nadal).

But Kyrgios... Which Kyrgios shows up?

In his first Grand Slam final, he bursts in as the best version of the bad boy: Kyrgios (in his day he was the best junior in the world, today he is only the 40th racket on the circuit, his career has never taken off) take out like the biggest. Almost every first serve goes inside (71%). He hits seven aces in the first set (30 at the end of the match, just twice as many as Djokovic).

He insists on the serve-volley, a hammer that confuses Djokovic in the first set. He chains fourteen winners, only four errors. He breaks the Serb's serve in the fifth game, takes the match to his turf. Kyrgios messes it up, makes it unpredictable, insists on Djokovic's backhand, forbids him from passing to the right. If the thing drags on, he cuts the exchanges, that there is no rhythm. A dropshot, a shot between the legs... In 31 minutes he's up 6-4.

Djokovic looks down. He has to come back.

As with Sinner in quarters. Like with Norrie in the semi-final.

He does so as soon as Kyrgios' first serve loses its effectiveness. It occurs in the fourth game of the second set. Djokovic puts pressure on Kyrgios to return, who looks 3-1 down and then 4-1. Now the bad boy appears. Now the Aussie curses himself, shouts, argues with his grandstand (he currently has no coach; his father and his girlfriend are in the box). He asks the judge to tell the public to shut up. Kyrgios looks like McEnroe. He chews a banana on breaks, talks with his mouth full.

Kyrgios is already Kyrgios at his best. He wears his hat backwards and his tank top, there are two pairs of sneakers on his bench, he talks and talks and doesn't shut up. That is his tone, perhaps he is trying to throw Djokovic off center.

The Serbian does not fall into the trap: he weaves his web, the same one that has led him to chain 27 wins at Wimbledon.

Djokovic hasn't lost a match in London since 2017 (then he had to retire against Tomas Berdych in the quarters; it's funny, until now Djokovic had never knocked down Kyrgios, they were 2-0 for the Australian in their heads-up).

At 1h10m, the Serbian equals the final.

-Do you want to play for me? Kyrgios shouts to his box.

Their screams fly over the cathedral. He is angry. His partner, Costen Hatzi, asks him to calm down. Djokovic, other times unruly, handles himself in zen mode.

What a magnificent ending!

-How can a spectator distract me when I'm between the first and second serve? This is the Wimbledon final. I've asked you before and I'll tell you again now: you have to kick her out of the stands. She is drunk -he insists to the judge.

Kyrgios protests and protests. But far from running away, he stays in the game. Fury gives him wings. It looks like McEnroe! He regains efficiency on serve, returns to serve-volley, is ruthless at the net, also hits between the legs. When things get complicated, he signs another ace. He is gamer even in the game of his life.

Djokovic is as if he wasn't there, but he is. He is always there. In silence, he waits for his moment. He arrives in the ninth game, when he comes back from 40-0 to break the Aussie's serve:

-Again I get 40-0 up and again I relax and again we go to the deuce. Why is this happening to me? Tell me something, why? I don't know how to finish the game!! Why am I doing this!!? Kyrgios shouts now.

His box does not know what face to make. Djokovic doesn't even flinch. Going about his business, with consistency and subtlety, two hours into the game the third set was scored. He signs fewer aces and fewer winners but above all, fewer unforced errors (17, to Kyrgios' 33). He does not offer fissures, he rides towards the tie break of the fourth set while his box crosses himself.

In the battle of nerves, Djokovic rises, so many times he has seen himself in one of these. His mettle exasperates Kyrgios, who goes to the limit on every hit when he plays speculate.

Heartbroken, the Serb covers his face with a towel and cries.

For him, the year has been a roller coaster.