Cándido Conde-Pumpido and María Luisa Balaguer, of the progressive candidates to preside over the TC

Once the renewal of the Constitutional Court was completed this Thursday with the entry of four new magistrates, three progressives and one conservative, and the departure of another four, three conservatives and one progressive, the body of constitutional guarantees has come to have a clear progressive majority (7-4), which will mean, shortly, a change in the presidency, for which two candidates from the new majority trend stand out: the former State Attorney General, Cándido Conde-Pumpido, and magistrate María Luisa balaguer. 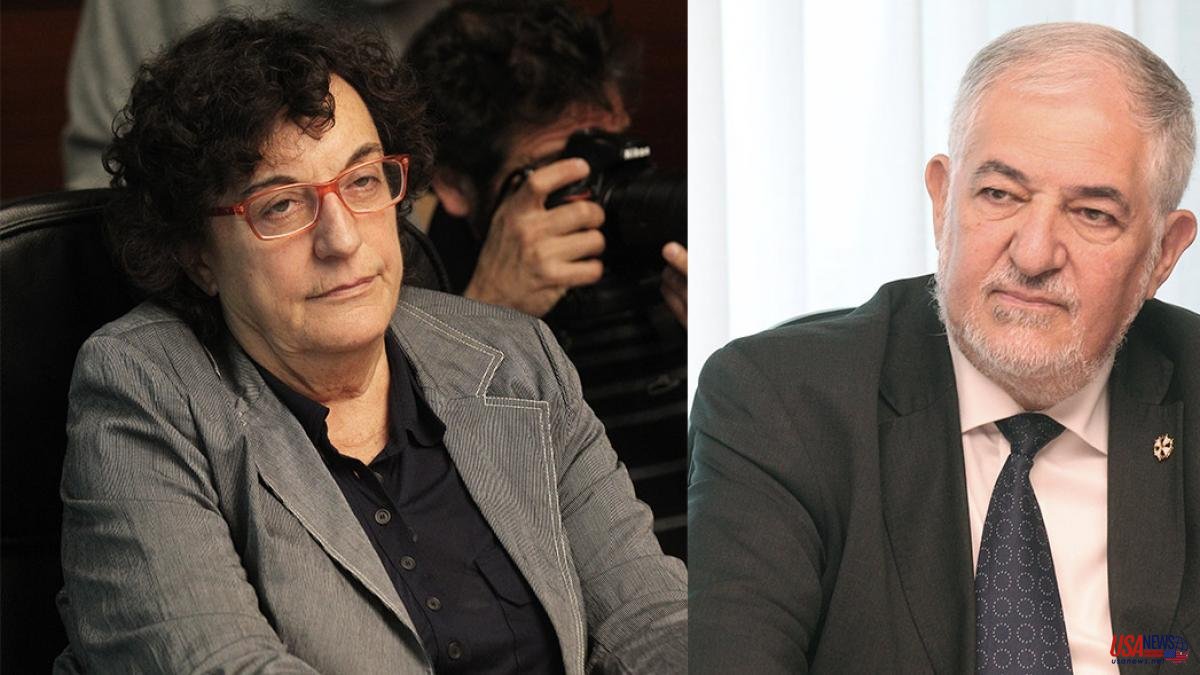 Once the renewal of the Constitutional Court was completed this Thursday with the entry of four new magistrates, three progressives and one conservative, and the departure of another four, three conservatives and one progressive, the body of constitutional guarantees has come to have a clear progressive majority (7-4), which will mean, shortly, a change in the presidency, for which two candidates from the new majority trend stand out: the former State Attorney General, Cándido Conde-Pumpido, and magistrate María Luisa balaguer.

They will be elected in a next plenary session by the members of the TC themselves, after the departure of its current president, Pedro González Trevijano. In this sense, the maneuvers of the conservatives of the General Council of the Judiciary to prevent José Manuel Bandrés, the candidate preferred by the progressives, from being appointed, were aimed at preventing Conde-Pumpido from being elected. The commitment of this sector to María Luisa Segoviano, which the progressives ended up accepting, was intended to tip the scales in favor of Balaguer, who was equally progressive and eager to take office. The idea of ​​the conservatives, who see Conde-Pumpido as Moncloa's candidate, is for Segoviano and Balaguer herself to vote for this second one and add six votes in plenary session, which would leave the former attorney general out of the presidency.

Conde-Pumpido (La Coruña, 1949), graduated in Law and in Economic and Business Sciences from the University of Santiago de Compostela, comes from a family of eminent jurists and began his judicial career in 1974 as a first instance judge in Puebla de Sanabria (Zamora) and Carballino (Orense) and in 1981 he was promoted to magistrate. After a season in the Basque Country as a magistrate in the Provincial Court of San Sebastián, he went on to preside over the Provincial Court of Segovia and in 1995 he was appointed magistrate of the Second Chamber of the Supreme Court, being then the youngest of the High Court with 46 years.

In 2004 he was appointed State Attorney General by José Luis Rodríguez Zapatero, a position that he repeated for a second term in 2008, being the first appointed under the new system established by the 2007 reform of the Statute of the Public Prosecutor of which he was one of top promoters. In this position, he reinforced the activity of the Prosecutor of the National Court against Islamist terrorism in response to the attack on March 11, 2004. In relation to ETA terrorism, he obtained in various processes the illegalization of several covert electoral brands of Herri Batasuna that they did not condemn terrorism under the party law. He created three specialized Prosecutor's Offices, in Minors, Computer Crime and International Cooperation and promoted the European Prosecutor's Office.

In February 2009, he participated in the Paris Court of Cassation in the constitution of the Network of General Prosecutors of the Supreme Courts of the European Union. In May of the same year he was elected, in Prague, president of the Network.

He is a natural director of the Council of State since May 2004.

In 2017, he was elected magistrate of the Constitutional Court at the proposal of the Senate. In the guarantee body, he was a speaker of different sentences, among them, the one that established that the Constitution excludes, as a general rule, the journalistic use of hidden cameras and the one that declared the nullity of the legal precept that made possible the compilation by political parties of personal data referring to the ideology of citizens. He was also a rapporteur for the ruling that declared the system for calculating the retirement pension for part-time workers unconstitutional, appreciating direct and indirect discrimination based on gender and declared the partial unconstitutionality of the Tax Code of Catalonia.

He was also the coordinator of the sentences handed down in amparo appeals relating to the criminal process that prosecuted those responsible for the process in the Supreme Court, until he was challenged by Carles Puigdemont and other defendants for alleged loss of impartiality, at which time he voluntarily abstained. of the causes. The appeals alleged that in a conference in the Congress of Deputies he described the events that had occurred in Catalonia during the autumn of 2017 as "threats" and added that the pro-independence leaders had "risen up" against national sovereignty with the so-called disconnection laws.

In June 2021, he positioned himself, together with the president of the Court and three other magistrates, against the majority ruling that considered that in order to face the covid pandemic, the Government should have declared a state of emergency instead of a state of emergency. alarm. In his particular vote, the magistrate criticized the majority for making a "short and fragile" sentence based on arguments more typical of "parlor jurists" than interpreters of the Constitution. Later he apologized for "unfortunate" expressions that he finally chose to remove from the text.

He is the author of numerous publications on criminal and procedural matters.

María Luisa Balaguer (Almería in 1953) is a professor of Constitutional Law at the University of Malaga, where she worked as a professor, and accessed the guarantee body in 2017 at the proposal of the Senate.

The magistrate has raised particular votes in far-reaching sentences in recent years, such as in the amparo appeals for those convicted of the process, on the state of alarm due to the pandemic or, recently, against the precautionary measures that prevented the Chamber High to approve the changes in the Judiciary.

Unlike other magistrates, Balaguer comes from the academic world, a fact that he claims because it gives him, he considers, "ideological elasticity". He has always publicly declared himself a person of the left and a feminist. He has spoken on numerous occasions and has written several books on the gender perspective. She also considers herself a republican, although that does not prevent her from defending the institution of the monarchy, she assures, because it is included in the Magna Carta.

Apart from his ideology, which he has never hidden, he has stated more than once that the actions of the TC must be far from politics and circumscribed to neutrality. And another of the pillars on which he influences is consensus. She stands as his defender. She did so, as she herself revealed, in the plenary session on the PP's appeal to stop the proposed reform law of the CGPJ and the TC, where she sought a meeting point with the conservative magistrates that finally did not arrive. Consequently, she decided to show her discrepancy with a dissenting opinion. It's nothing exceptional in her case. "I make a particular vote to everything that I do not agree with," she explained in an interview.

It also differed, in its day, from the Court's ruling on the amparo appeals filed by the leaders of the process. Together with Juan Antonio Xiol, he defended, contrary to the Supreme Court's criteria, a greater contrast between the various responsibilities of the convicted. This particular vote was perceived, at that time, as a crack for the pro-independence politicians to be able to go to Strasbourg with more arguments.

He has recognized that in relation to the process he has had a different vision, on various occasions, compared to other colleagues. He even went so far as to show his disagreement, in a recent interview, with the 2010 sentence that cut the Catalan Statute, although Balaguer at that time was not part of the TC.

When the guarantee body amended the Government for the first two states of alarm of the pandemic, María Luisa Balaguer once again raised her dissenting voice and vindicated the proportionality criterion of the measure. In her opinion, the Sánchez Executive had adjusted to the law of laws.

The progressive magistrate would like - as she has made explicit publicly - that there were changes in the Constitution in the field of fundamental freedoms. A Magna Carta that came out of a "model" Transition, as she defends herself. And she is committed to interpreting this text, like the law in general, with "a certain plasticity."

Now she opts to lead the TC (she would be the second president in history), although a short time ago she shied away from facing Candido Conde-Pumpido and even said that she would vote in his favor if the case arose. In the High Court, Balaguer would like to promote a transparency policy that brings the institution closer to society, she says. She believes that the Court should explain the decisions it makes at press conferences. An information policy based on facilitating understanding. In other words, being able to transmit the task carried out by an organ that is often perceived as distant. His recipe is, then, to open windows and do pedagogy.