Clark Gable, from escort boy to

He began as a villain, lived great adventures in distant seas, made Jean Harlow, Joan Crawford or Greta Garbo crazy with love, dealt with the intelligence of Claudette Colbert and consolidated himself as the unforgettable Rhett Butler of Gone with the Wind. 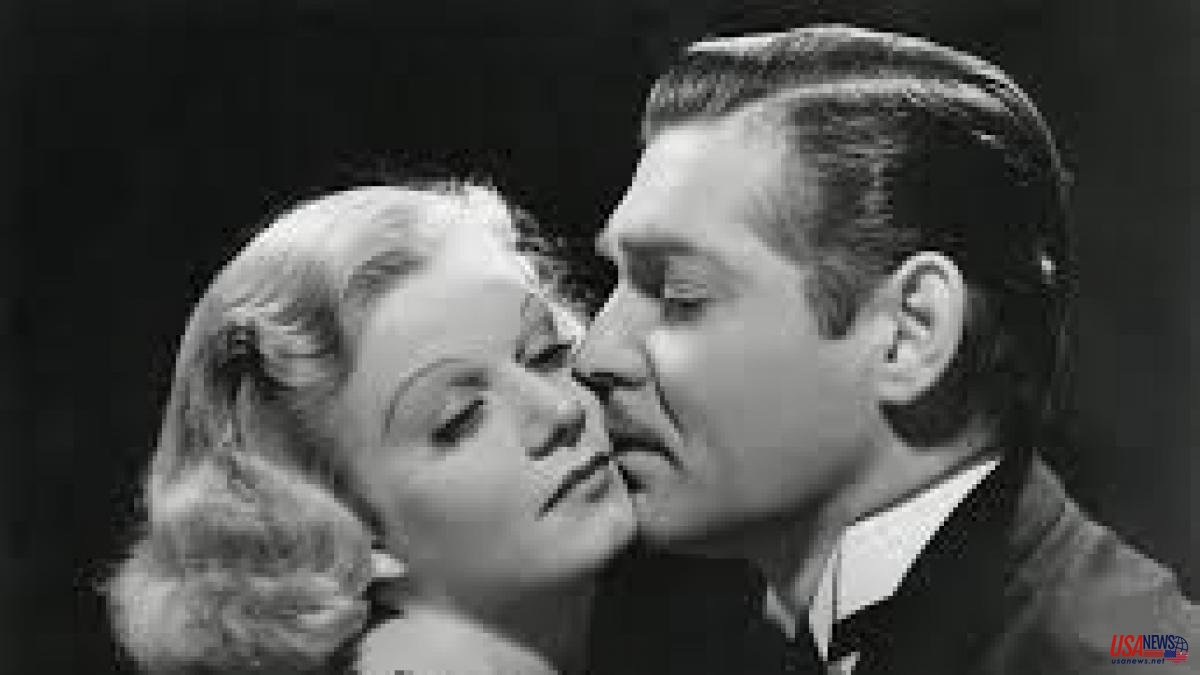 He began as a villain, lived great adventures in distant seas, made Jean Harlow, Joan Crawford or Greta Garbo crazy with love, dealt with the intelligence of Claudette Colbert and consolidated himself as the unforgettable Rhett Butler of Gone with the Wind. Clark Gable had a hard time gaining a foothold in the Mecca of cinema, but when he did, he became the King of Hollywood and was forever.

Gable (1901-1960) had a difficult childhood, motherless, he started working in a steel factory at the age of 15. There he saw his first movie and fell in love with cinema, so much so that he went to Hollywood with just what he was wearing. They were difficult years. The young Clark slept on the street and became a company boy, because according to his biographers, he made a living by letting himself be seduced by homosexual actors in exchange for money.

Thus he made a hole as an extra in silent films. But he wanted more. He underwent several castings that were unsuccessful. Darryl F. Zanuck rejected him for "having ears like a jug" and Jack Warner didn't want him either: "what a monkey face". But Clark didn't throw in the towel and found a way to succeed through marriage. He married in 1924 Josephine Dilloh, 14 years his senior, a diction teacher and stage manager. Her wife, the first of five, taught Gable the art of acting and helped him find better roles. After separating from Dilloh, Gable married Rea Langham, 15 years his senior, a Texan millionaire who financed the actor's Broadway debut.

"Gable first attracted the attention of the public when he played the evil and bitter condemned to death, Killer Mears, in The last mile in a certain theater in Los Angeles", recounted a chronicle published in La Vanguardia in May 1932. That was what he did two years in which the actor had shot one film after another, because after Warner's rejection, Metro hired him and gave him work, a lot of work in the most varied roles: "he has more personalities than spots on the leopard's skin or colors the chameleon".

In Dance, crazy people, dance (Harry Beaumont, 1931) he played a white-collar thief. In Free Soul (Clarence Brown, 1931) he was a villain, but with a sympathetic character. And he seemed like he was pointing character actor ways in The Mysterious Six (George W. Hill, 1931). But it was a gallant role that gave him his first leading role, none other than Greta Garbo in Susan Lenox (Robert Z. Leonard, 1931).

The Metro had found a seam and knew how to get all its juice out of it. The studio paired the actor with the explosive Jean Harlow, the most sensual blonde of the 1930s, in films like Land of Passion (Victor Fleming, 1932), where the couple lived a triangle with Mary Astor in an exotic rubber plantation in Indochina. , or China Seas (Tay Garnett, 1935), where Gable was the captain of a ship with a difficult mission that, to make matters worse, was forced to travel with two ex-girlfriends.

In its eagerness to squeeze its new star, the studio also paired Gable with Joan Crawford and that union paid off at the box office. The duo shared the poster for eight films that delighted the public at the time, such as Love for Sale (Clarence Brown, 1931), in which Crawford changed his identity to maintain an affair with Gable, a promising politician.

In their next work together, Dancer's Soul (Robert Z. Leonard, 1932) Joan worked in a dive bar from which Clark rescued her to make her the queen of Broadway. And Chained (Clarence Brown, 1934) recovered the topic of the love triangle, although this time it was Crawford who was torn between the love of two men, Gable and Otto Kruger.

The actor was already a star when an unexpected success came to him. Gable and Claudette Colbert reluctantly embarked on a Frank Capra comedy. She was a capricious millionaire who runs away from her father to meet her lover and he, a journalist in low hours. Both coincided in a bus bound for New York. The delicious It happened one night (1934) triumphed against all odds. It took home a bunch of Oscars, including one for Gable, was a box office hit, and is still considered one of the best movies of all time.

After that foray into comedy, Gable returned to adventures in The Tragedy of the Bounty (Frank Lloyd, 1935), accompanied by Charles Laughton and Franchot Tone, in the role of the sailor Fletcher who mutinies against the tyrant Captain Bligh. And he had an affair with Jeanette MacDonald under the watchful eye of a priest played by Spencer Tracy at the gates of the terrible earthquake that devastated the city in San Francisco (W.S. Van Dyke, 1936).

Gable was smiling at life. In 1938 the public gave him the title of King of Hollywood that he would never give up. In addition, he had met the love of his life, actress Carole Lombard, the queen of comedy, whom he married in 1939, becoming the most envied ideal couple in the world. And then he received the call from David O. Selznick who wanted him to play Rhett Butler, the protagonist of the most ambitious production of the time, the adaptation of Margaret Mitchell's novel Gone with the Wind (Victor Fleming, 1939) .

This time he did not win the Oscar. But nobody cared, because that Rhett, unscrupulous smuggler, but with a tender background, who was capable of anything to make Scarlett O'Hara (Vivien Leigh) fall in love, conquered the hearts of the public for generations and made Gable an unforgettable actor. .

After the success came the bad times. Lombard died in 1942 in a plane crash. Gable couldn't get over the loss. He holed up on his ranch for months in grief and then joined the Air Force and went on suicide missions. At the end of World War II he returned to Hollywood determined to resume his career.

The Metro searched for him an ideal vehicle for that return again to the orders of Fleming, again as a sailor who sails the seas and with the new star of the studio, Greer Garson, as a partner. But Adventure (1945) was not liked by the critics nor did it work at the box office. However, Gable quickly recovered from that stumble. In Merchants of Illusions (Jack Conway, 1947) he played an unscrupulous publicist and in The Rival (Mervyn LeRoy, 1948) he was a doctor who went to war and got involved with a beautiful nurse, Lana Turner, although he couldn't help it. remorse for cheating on his wife.

He hit the box office again with a remake of Land of Passion. This time the action moved from Indichina to Africa and the other two vertices of the love triangle were Ava Gardner and Grace Kelly. Mogambo (John Ford, 1953) was a success that was followed by less remembered films such as Mists of Treason (Gottfried Reinhardt, 1954), again with Lana Turner; Date in Hong Kong (Edward Dmytryk, 1955) with Susan Hayward, or The Free Slave (Raoul Walsh, 1957) with Yvonne De Carlo.

The actor had been married in the early 1950s to Lady Sylvia Ashley, who physically resembled his beloved Lombard, but the marriage only lasted a few months. He recovered the illusion with Kate Williams, his fifth wife, with whom he married in 1955. The couple was expecting a child, the first for Gable who had always regretted not having been a father, when the actor suffered a heart attack . He was admitted and died ten days later. He was 59 years old.

He left as a cinematographic inheritance a twilight film that he had just shot with two other failed stars, Marilyn Monroe and Montgomery Clift. Rebel Lives (John Huston, 1961) became the actor's professional testament. His assets, valued at about two million dollars, went to the hands of that posthumous son who was born four months after the death of his Gable.

Years later, it was learned that Gable did indeed have a biological daughter. In 1935 she had filmed The Call of the Jungle (William A. Wellman) with the famous actress Loretta Young with whom he had a passionate affair. She got pregnant, but she hid it. He had a daughter, Judy Lewis, and pretended that he had adopted her to avoid scandal. Lewis was only able to confirm that she was Gable's daughter in 2000, her mother confessed to him on her deathbed.