Can Colombia and Chile overcome the historical failure of the left in Latin America?

The triumph of Gustavo Petro in Colombia, like that of Gabriel Boric in Chile, represents the rise of a new Latin American left that seeks social justice and freedom where all other lefts in the hemisphere have failed. 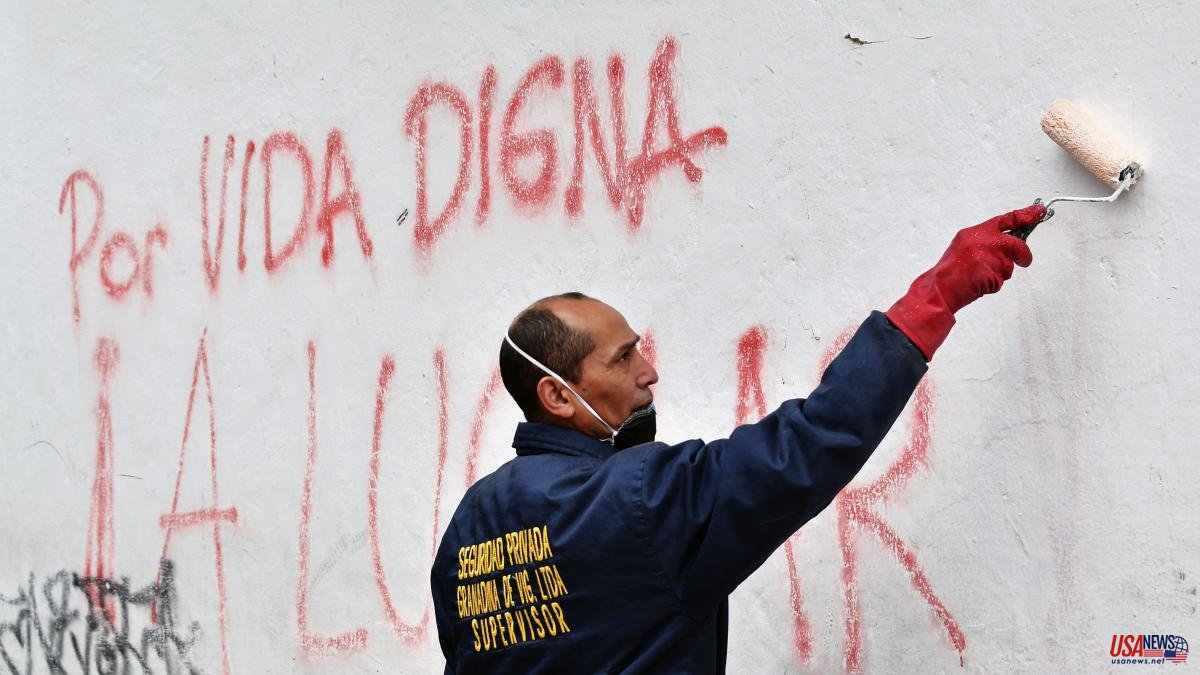 The triumph of Gustavo Petro in Colombia, like that of Gabriel Boric in Chile, represents the rise of a new Latin American left that seeks social justice and freedom where all other lefts in the hemisphere have failed.

Very unequal and corrupt, ultraliberal and extractive societies, shattered by violence and populism, have sunk dozens of political projects such as those that Petro and Boric are now launching, and Lula could also do so if he wins the October elections in Brazil and the state resists Bolsonaro's coup threats.

Latin American countries are not at peace with themselves and without this inner peace they have not been able to become mature and stable societies. The causes start with colonialism and end with the ineptitude of almost all governments to govern effectively.

The pandemic has highlighted it. Latin America, for example, only has 8% of the world's population, but more than a third of the deaths worldwide from the coronavirus.

Poverty is the main problem in most countries. In Venezuela it affects 80% of the population. In Argentina to more than 40%, the same as in Colombia.

It has been 23 years since Hugo Chávez won his first elections and nine have passed since his death. Nothing remains of the Bolivarian movement that he led. The problems that he tried to tackle are still as serious as then, if not worse.

Boric was one of the young Latin Americans who got excited about Chávez, but he lost his revolutionary innocence a long time ago. In November 2019, he signed an agreement for social peace and a new Constitution with the Chilean right. He considered that the revolutionary rhetoric of Chavismo and the ideological absolutism of Fidel Castro had not borne any fruit. "They have been more of a poison than a fertilizer," he said during last year's election campaign.

Boric was a university leader before becoming the first Chilean president to have been born in Magallanes (Patagonia). He is also the youngest and the first with a tattooed body, four illustrations on his skin in homage to his homeland.

Petro was a guerrilla member of the M-19, a group that demobilized in 1990. He changed violence for politics. He was a senator and mayor of Bogotá before becoming president.

Boric is 36 years old and Petro, 62. A generation separates them, but almost nothing else. They see their countries in a similar light. They agree on diagnosis and solutions. Chile and Colombia are among the most unequal states in the world, and the challenge of expanding the shrinking middle classes there and lifting millions of people out of poverty is enormous. Education, health and housing are rights that administrations cannot make universal. Much less, guarantee decent pensions.

Boric has promised that "if Chile was the cradle of neoliberalism, it will also be its tomb."

He and Petro intend to reduce inequality with social policies that must be financed by raising taxes on the richest and on large corporations. Both also promise to defend the environment and reduce economic dependence on natural resources. The mining and hydrocarbon companies are not at all calm.

The Chinese embassy in Santiago has reminded Boric that China is his first trading partner. Chile is the world's leading producer of copper and the second of lithium. Chinese cell phones and batteries depend on these minerals.

Petro promises to curb the exploitation of gas and oil deposits. It also advocates an agrarian reform that will imply more protectionism and the voluntary, not forced, renunciation of coca cultivation. America won't like it.

Petro, unlike Boric, faces the added problem of guerrilla violence. The 2016 peace agreements have not come out of the drawer. Thousands of FARC militiamen then laid down their arms, thinking that they would be compensated with land they still do not have. The paramilitaries have killed hundreds of them. Many rebels have taken up the rifle again.

Guerrilla and paramilitary violence, from drug traffickers, smugglers and illegal exploiters of forests and mines, has skyrocketed in Colombia. Last year there were more deaths than in almost the entire previous decade. There are more than 100,000 internally displaced persons.

On Sunday, in a Bogotá stadium packed to overflowing with supporters, Petro insisted on his "politics of love," based on hope, dialogue and understanding.

On March 11, during his inaugural speech, Boric spoke of uniting the country, of "loving each other and smiling again."

These are words that go down well in Catholic and evangelical societies, where religion has been a refuge for the most helpless, as well as a bastion for the most privileged.

The president of Ecuador, Guillermo Lasso, is a member of Opus Dei, but this has not prevented him from defending feminism, gay pride and abortion in case of rape.

The social reconciliation that Lasso seeks is the same that Boric and Petro aspire to, because without unity they will not achieve the changes they advocate. Both look askance at the failure of the Peronist Alberto Fernández in Argentina, where the peso has lost 80% of its value since 2017 and inflation exceeds 50%.

Peronism seems old, as ineffective as the ideological indigenism of Andrés Manuel López Obrador in Mexico or the communist rhetoric of Pedro Castillo in Peru.

López Obrador boycotted the recent Las Américas summit in Los Angeles because the United States did not invite the presidents of Cuba, Venezuela and Nicaragua, three totalitarian states.

Boric did go and meet with Joe Biden. The course of his diplomatic strategy marked him at his inauguration. He did not invite Daniel Ortega, president of Nicaragua, but he did invite his first poet, Gioconda Belli, now in exile in Madrid.

Boric's pragmatism infuriates the most populist left. Hundreds of radicalized students demonstrate in Santiago every week to demand reforms that the new president has impossible yet been able to implement.

It is very possible that Petro will not have a day of respite either. The armed forces and Uribismo, the ultra-conservative movement of the most privileged classes, feel threatened. The new president has already promised during the campaign a renewal of the military leadership and an offensive against corruption and tax evasion.

When Petro speaks of "more economic opportunities for all" and more equitable access to land, businessmen and landowners frown. When he assures that he will raise taxes on the 4,000 wealthiest families, they think about how to get their money out of the country.

Boric said at his inauguration that "never again" will the Chilean state repress its people. The three thousand dead of Pinochetism, the hundreds of wounded and the thousands of imprisoned are not forgotten.

Nor does Colombia forget the deaths of the guerrillas, drug traffickers and paramilitary groups. Petro is the first left-wing president in the country's history largely because other candidates were assassinated.

The social outbreak of Chile in 2019 left around thirty dead and that of Colombia in 2021, fifty.

The dead weigh. Its shadow is as long as that left by dictatorships. Although Colombia abandoned totalitarianism in the 1950s, it has never been a full democracy until now that has allowed for the election of a progressive president.

On the contrary, Chile, which did not recover democracy until 1990, has consolidated a system of alternating power between the center-left and the center-right that maintained stability after Pinochetism and, thanks to it, Boric can now heal wounds .

The result of the Constituent Assembly will mark Boric's presidency. If it is successful, if the Chilean Constitution goes ahead in the referendum on September 4 and serves as an example to other Latin American democracies, the historic change will begin to take hold.

Boric will then be able to sit at the height of José Mújica, the old progressive lion who governed Uruguay more than ten years ago and who today lives retired in his country house, waiting for the young people to take over from him.

One month after the referendum in Chile, on October 2, another old lion of the Latin American left, Luiz Inácio Lula da Silva, may be resurrected. The president of change in Brazil, accused of corruption, imprisoned and rehabilitated, has battled against the political system and cancer to try again twelve years later. The problems facing Brazil are everyone's and the solutions anticipated by Lula are similar to those of Petro and Boric.

The polls give Lula an advantage of more than ten points over the current president, the ultra-conservative populist Jair Bolsonaro. However, if Lula wins, Bolsonaro will denounce electoral fraud, as Donald Trump did in the United States. He is already doing it and, worst of all, the army supports these baseless accusations against the Brazilian electoral system.

Bolsonaro, who rose to the rank of captain, has packed his administration with generals and has said the army should conduct its own count.

Brazil is the main economy and the most populous democracy in Latin America, but here too the shadow of the dictatorship is long. The military governed between 1964 and 1985, and Bolsonaro has spoken highly of those years.

Fears of a coup in Brazil grow as October 2 approaches. Edson Fachin, judge of the Supreme Court and the highest electoral authority in the country, assures that democracy is hanging by a thread. It is not clear that the half million police officers and 340,000 members of the armed forces will side with democracy if Bolsonaro decides to carry out a coup.

Brazil shows, like Cuba, Venezuela and Nicaragua, that the dichotomy in Latin America is not so much between progressives and conservatives, but between liberal democracy and authoritarian populism, whether on the left or on the right.

The great challenge for Petro and Boric, as well as for other genuinely democratic presidents, is to overcome the caudillista temptation of so many Latin American governments.

Petro is accused, precisely, of being intransigent and a despot. His close collaborators in the Bogotá mayor's office abandoned him frustrated by his authoritarianism. They criticized that he wanted to be right even when he wasn't. If Petro cannot work as a team, he will not be able to unite Colombia and his presidency will be one more failure of the Latin American left.

Liberal democracy is going backwards all over the world, pressured by the fear of the changes that come from the hand of technology and globalization, but in Latin America it seems that Petro, Boric and, perhaps, Lula will be able to consolidate it if they govern with inclusion and firmness. The importance of your mission is as high as the risk of failure.