“In Prosperitat is there a concentration of people born in Extremadura? It is the first news I have. 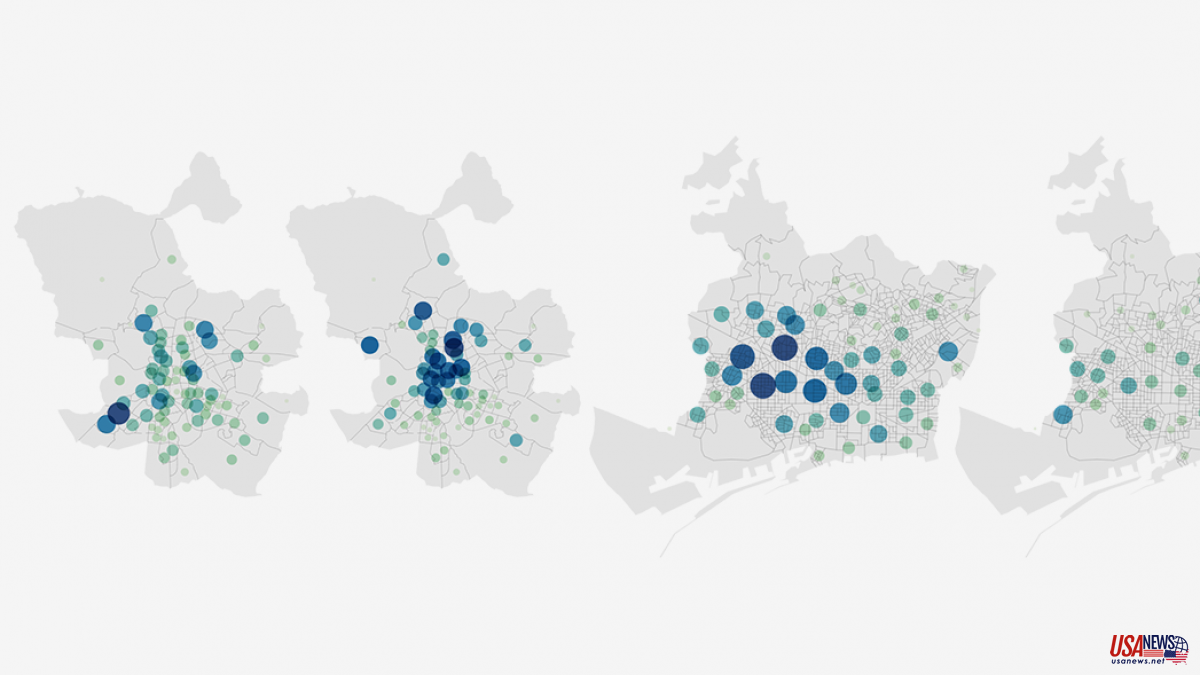 “In Prosperitat is there a concentration of people born in Extremadura? It is the first news I have. Here there is a bit of everything, but I wouldn't have said about the people from Extremadura” explains the young man who attends the reception of the neighborhood house. The director of the day center for the elderly does the same: “I am not aware that there are many people from Extremadura”.

The padrón conveys the opposite. And that they live above all in these streets of the Nou Barris district, the one with the lowest income in Barcelona, ​​and not in another, is no coincidence. Because when seeing where each of the Spaniards settles when migrating within the country according to their autonomy of origin, the differences are evident and purchasing power decides. Still.

This is confirmed by municipal statistics.

Today almost everyone who migrates in Spain between autonomous communities does so to Madrid. It is the great vacuum cleaner of migration between autonomies. It attracts twice the population of Barcelona. The rest, be it Valencia or a previously prominent destination, Bilbao, are hardly testimonial. And in Madrid, as in Barcelona, ​​there are neighborhoods with a majority of people from Extremadura, Madrid, Basques, Catalans, Castilians... Because they tend to concentrate in very different areas with their income by flag.

“Normally there is a certain spatial segregation by socioeconomic or economic level and it is maintained for these migrants. On average those from Madrid come from a rich region, will tend to be rich, and will be located in rich neighborhoods. The opposite is true for migrants from Extremadura. Migrations occur, fundamentally, for economic reasons” explains Professor Francisco José Goerlich from the Department of Economic Analysis of the University of Valencia.

In other words, being Galician is not the same as being from Extremadura when migrating within Spain. Nor was it in the past with the migratory waves prior to democracy with Franco's developmentalism. Nor is it now.

This is well illustrated by Madrid, which even in the pandemic year 2020 attracted 70,000 inhabitants from other parts of Spain. It is, in fact, the main pole of Spanish attraction.

In the Spanish capital, the majority, beyond Madrid, are Castilians, Andalusians and Extremadurans, although there are also thousands of Basques as well as Valencians and Catalans. Both settle predominantly in areas distant from each other. And here the source income is key.

The Castilian-Leonese, Manchego, Andalusian and Extremadurans are highly concentrated in the southern neighbourhoods, precisely in the most humble urban areas. Basques, Catalans and Valencians do it in a marked way in the center of the capital.

In the neighborhood of Hispanoamérica, for example, with an upper middle income (about 90,000 euros net per household in 2019, at the level of Pedralbes in Barcelona and greater than that of Neguri in Getxo, Bizkaia, habitual residence of the Bilbao bourgeoisie), the born in the Basque Country. And they confirm it from the Más que pintxos bar. "There's a lot. They come a lot. Here and to many other places in the same area”.

Now, is it not due to historical trajectory and where they were before, do they continue? Cristina López Villanueva, a sociologist at the University of Barcelona, ​​reports: “In a migratory movement, the conditions of the place of emission and reception must be taken into account, and in this the element that most influences is the price of housing and land, which selects by attracting and expelling population. In places with high prices, the population with high incomes is located. And Madrid and Barcelona, ​​cities with a high intensity of internal and external migration, register housing prices among the highest in Spain. Thus, the concentration of people in the same community can be related to the income of the place of emission.”

Beyond the historical trajectory of some communities migrating within Spain, is the diverse purchasing power between autonomous communities, here, essential to explain it? Goerlich is questioned this time. "Yes," he insists resoundingly.

Moreover, he points out that if the educational level or occupation of migrants from Madrid were added to this, it would be observed, “almost certainly”, that they are people with a high educational level and high-paying occupations, and the opposite would be true for immigrants. Extremadurans. "It's a bit stylized, but in general, it's like that," he concludes.

It happens in Madrid. And it happens outside of Madrid.

The same thing happens in Barcelona –although in the same year that Madrid attracted more or less half of the population from other communities; that is, about 40,000 new registered citizens.

In the Catalan capital they are the majority beyond the Catalans, the Andalusians and the Castilian-Leoneses as well as Aragonese or Galician. But they are not lacking in the top 10 from Madrid and Basques. Nor the Extremadurans.

And again, the Basques and people from Madrid are concentrated in the upper area, the most expensive and exclusive area of ​​the city, unlike the Extremadurans, the majority in the northwest of the Catalan capital, an area with lower incomes such as the aforementioned Prosperitat, la Verneda and the Pau. Apart also in Sant Andreu.

Juan Antonio Módenes, main researcher on "Housing Demography" at the Center for Demographic Studies of the Universitat Autònoma de Barcelona, ​​recalls that the rural exodus due to the change in the agrarian model and industrialization during the 20th century was the cause of the first wave of migration , "which is currently reflected in the movements of labor related to mass tourism." In turn, he adds, the flows related to the State and public services given then today "have diversified into flows also related to business management structures."

The first flows affected, and affect, people of low socioeconomic status. The second to people with greater family and social resources. "And the key is that one and the other have different geographical origins related to the economic and social structures of each point", he continues.

It was seen, repeats, in the sixties. And it is seen in the present even though the flows are smaller and to cover positions not in the industry but in the entire range of low-level personal services. Internal migration flows in Spain are related to different socio-economic realities among different migrants. Happened yesterday. And it invariably happens today, according to experts.

Furthermore, the normal integration of past internal migratory waves in Spain can be seen in the cases of Bilbao and Valencia, important destinations in the past, now much smaller, in which a balance between origins and neighborhoods seems to settle, without great distinctions. in the distribution (over the different local districts) between them beyond the fact that in the Biscayan capital there are above all those born in Castilla y León and in the Valencian Community the manchegos.

That yes, the specialists repeat and repeat that it is something that has to do with regional differences that in some way occur in many other countries, relatively large, as well as heterogeneous.

In the US with much more marked social and regional differences than in Spain and where the racial factor is added. In Italy with migrations from the agrarian south of the Mezzogiorno to the industrial north. And even in France with migrations of future welfare state officials who came from the Southwest, with long-term educational strategies – as opposed to other internal flows of a different nature such as the Bretons.