Ayuso confronts Sánchez and warns him: "He can handle everything except Madrid"

Isabel Díaz Ayuso has no opponent in Madrid, at least that is what the Madrid president believes. 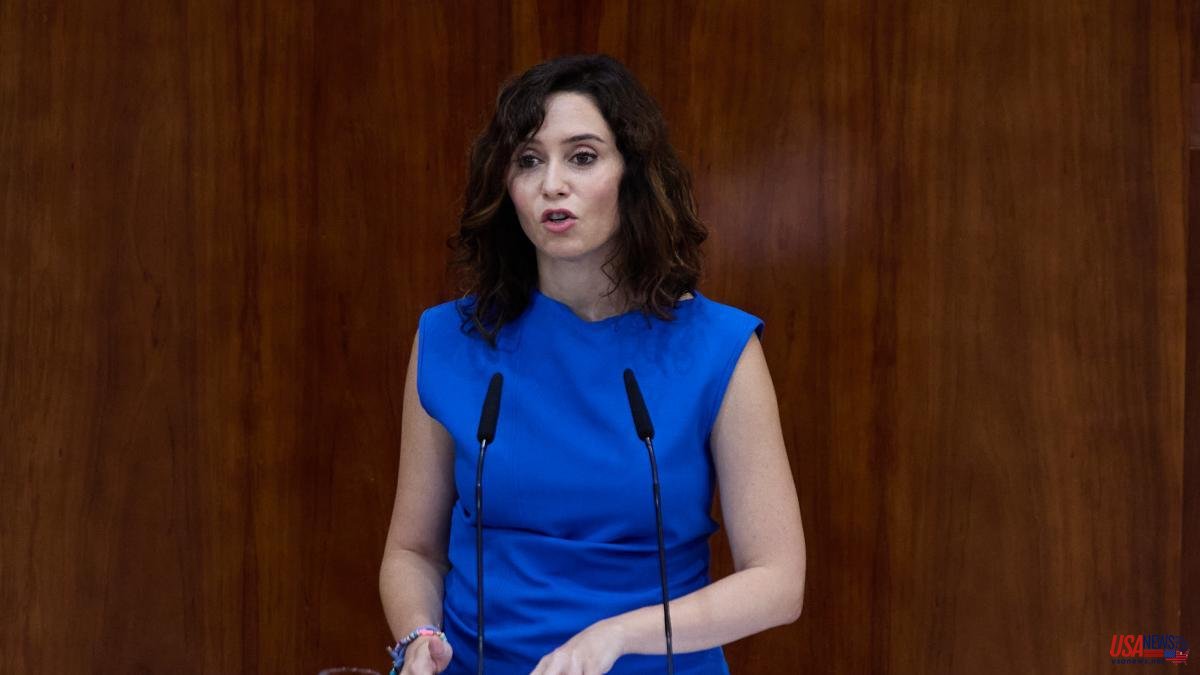 Isabel Díaz Ayuso has no opponent in Madrid, at least that is what the Madrid president believes. She fights in another league, that of national politics, and that is why she is measured against Pedro Sánchez, her true adversary, who in the debate on the state of the region, which began this morning in Madrid, made an amendment to the entire , especially on the economic plane. She is her counterweight, hence the tax cuts, starting with personal income tax, which she announced, to alleviate the "massive impoverishment of Spaniards" because of Sánchez.

The opening speech of the region's debate was actually the speech that Isabel Díaz Ayuso would have liked to have given, in the debate on the state of the nation, in July, in Congress, or last Tuesday's debate in the Senate, in the face to face that Sánchez and Alberto Núñez Feijóo starred in. A debate in which the president, contrary to what is usual in these cases, did not come out to give data or more data, or not only, but went on the attack against her opposition, which represents the president of the Government Pedro Sanchez.

An attack in which there is no agreement with the opposition in the Madrid Assembly, represented by Más Madrid and the PSOE, who only agreed to applaud one of his messages, the one he made in memory of the writer Javier Marías, who died yesterday in Madrid, and which will give its name to the Moratalaz Public Library, while the Regional Archive of the Community, located in the El Águila Complex, will bear the name of his mother, Lolita Franco.

Ayuso resorted to a quote from Javier Marías to underline that despite what he considers the achievements of his management, the difficult situation in the world, in Spain and in the Community, "Nothing is ever won forever."

The Madrid president reminded Sánchez of the sentence of the ERE and warned him about the possibility of pardoning the convicted socialists; She reproached him for pardoning the independentistas condemned by the Procès, she assured him that "we will defend Spain", he recalled the accusation of the already former Valencian vice president Mónica Oltra, or the labor reform. She even had a section to show herself against the Euthanasia Law, to criticize "that the Civil Guard is expelled from areas of Spain" and that "the Police and the Army" are belittled.

A sketch of what is happening in Spain and that is due, in the opinion of Isabel Díaz Ayuso, to Sánchez's policies: "The combination of legal insecurity, erratic policies aimed at social engineering and not at solving real problems, the lack of transparency and the reduction in freedom, the incompetence and ideologization of management, inflation, uncontrolled public spending, interest rates and taxes, together with other deeply erratic economic policies, are rapidly eroding the income of the families and the confidence of the Spaniards, who resist being divided, impoverished and who despair at the deterioration of the institutions".

For the Madrid president, "Sánchez's government and its pro-independence and communist partners want to compensate for their disastrous management and cover up their strategy of eating away at the constitutional design, making Spaniards dependent on payments and subsidies" and that, in her opinion, makes Spain lead to "Bolivarian nonsense if those of us who defend freedom and the rule of law do not know how to live up to it: oppose it, denouncing it without fear and offering effective alternatives at the height of time, without losing joy or letting ourselves be infected by hostility".

Madrid will be there to deal with this drift by the Government of Pedro Sánchez, and for this reason, from a political point of view, it considers that in the Community of Madrid "we are harassed by a central government that spares no means to attack our policies of freedom and prosperity". Hence the warning, Sánchez and his government "have gone for everything, but I answer, for everything except for the Community of Madrid, which will be the defender of freedom and of Spain."

Faced with that model of government, that of Sánchez, he praised not only his management, but what it represents, "freedom." There he made numerous announcements, each one of them chorused with applause by the PP benches. From the deflation of the personal income tax rate in the regional section, which is brought forward to 2022, to salary increases for teachers, professors and health workers with temporary contracts, to the commitment that there be a psychologist in all health centers, or that recover emergencies in all outpatient clinics.

Isabel Díaz Ayuso's policy in Madrid is considered a policy for Spain, and for this reason, she announced that she wants to "combat all attacks on Spanish, Spain and Hispanity, building bridges on both sides of the Atlantic", and in that she considers that the Spanish Office, whose head, Toni Cantó, has recently resigned, has borne much fruit.

The Madrilenian president announced that the Community will celebrate this year, for the second time, "and as it should, the Hispanic", with more than a hundred activities distributed between Madrid and a score of municipalities.

But Ayuso also has plans within Spain and assured that "this year we have proposed to strengthen ties with Barcelona." Thus, the new edition of Hispanidad will take some of its shows to the Apolo Theater in Barcelona, ​​which will also be presented in Madrid.

"The new relationship with Barcelona -said the Madrid president- begins in Hispanidad, but will continue with the celebration of Primavera Sound, the most important urban live music festival in Europe". She said that she will work to bring "these two great Spanish cities closer together, and we are going to do it through the best bridge: culture."