Pere Aragonès has taken a step further this Monday by positioning himself on the lawsuit of the President of the Parliament, Laura Borràs, and has marked distances between his case, for alleged splitting of contracts and favoring a friend when he headed the Institució de les Lletres Catalanes , and that of those charged with everything related to the 1-O referendum. 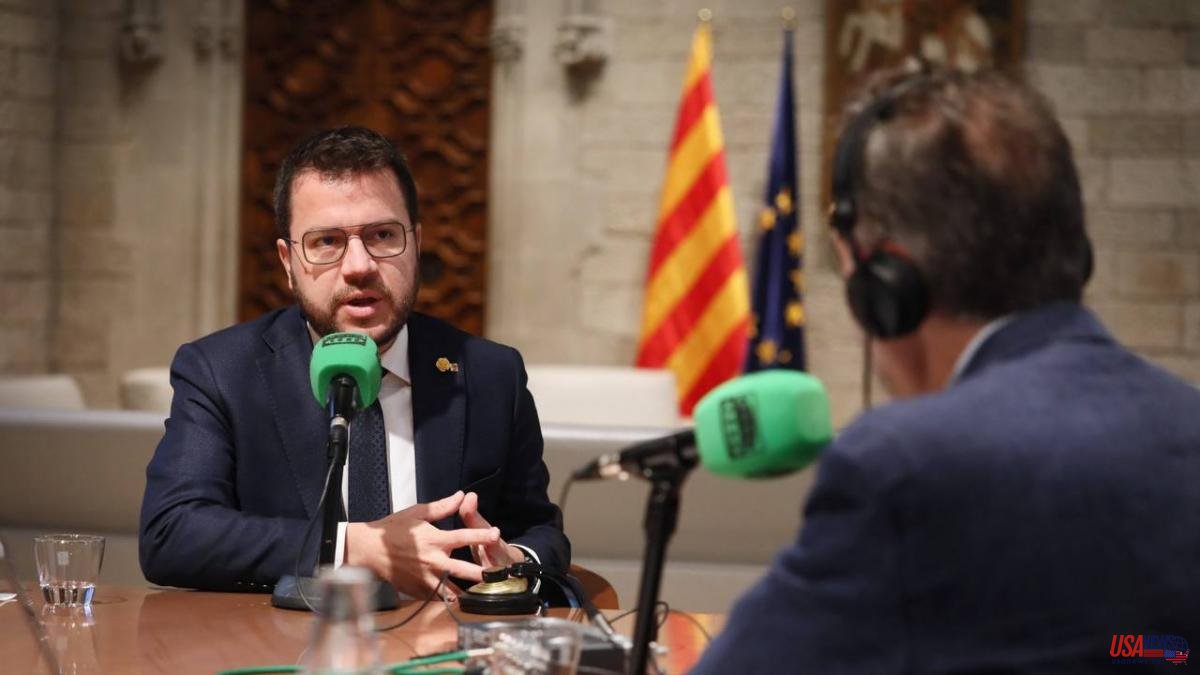 Pere Aragonès has taken a step further this Monday by positioning himself on the lawsuit of the President of the Parliament, Laura Borràs, and has marked distances between his case, for alleged splitting of contracts and favoring a friend when he headed the Institució de les Lletres Catalanes , and that of those charged with everything related to the 1-O referendum.

The president of the Generalitat had dodged the issue last week in the hemicycle, during the control session of the Government, when the opposition put the hook on him. But today he has not refused it, and in an interview on Onda Cero he has suggested that if the Junts leader were from the Esquerra Republicana "he would step aside" to defend her innocence without compromising the institutions.

Junts per Catalunya's reply was not long in coming and Josep Rius, who has framed the court case in a "lawfare" case again, has demanded that the "presumption of innocence" of its president and the "sovereignty of the Parliament" be defended. of the interference” of the courts”, so that “they do not decide who is a deputy and who is not”.

"Putting the prestige of the institution first is defending the sovereignty of the Chamber and the presumption of innocence," stressed the vice president and spokesperson for the formation. “We will not collaborate to make a Parliament tailored to the judicial leadership”, he has sentenced.

"The accusation made against Laura Borràs and the facts that are being investigated with the cases that have to do with political activity around 1-O are very different," said the head of the Catalan Executive, who has justified immediately that statement: “The crimes for which she is being investigated – prevarication, fraud, embezzlement and false documentation – are what they are, regardless of whether it is true that these events occurred or not.”

“I can tell you what we would do in Esquerra Republicana if he were a person from our party, he would put the institution ahead, he would stand aside and defend his innocence. If she were acquitted, the person would be restored with the responsibilities she had", summarized the Catalan president, who has remarked that the regulations of the Catalan Chamber "do not require resignation" and "allow suspension".

In this way, the also national coordinator of ERC has expressed what is the bet of his training: that Borràs ask to be suspended until there is a sentence, as stipulated in article 25.2 of the institution's regulations - The suspension to which referred to in section 1 can also occur if requested by an affected deputy, with the agreement of the spokesperson of his parliamentary group, for one of the causes mentioned. In this case, the Committee on the Statute of Deputies must issue an opinion and the Bureau of Parliament must resolve the request. “It is a decision that in the first place corresponds to Borràs and Junts. We still have time to see what his definitive position is”, Aragonès settled.

But in the event that Borràs does not take that step, there is article 25.4 of the regulation, provided for cases of corruption and with a mechanism that automates the suspension if an oral trial is opened, as long as a majority does not say otherwise if there are doubts about the nature of the crimes –In cases in which the accusation is for crimes related to corruption, the Board of the Parliament, once the order to open the oral trial is final and is aware of it, must agree to the suspension of the rights and parliamentary duties immediately. If doubts arise about the type of crime or about the regime of incompatibilities applicable throughout the suspension, the opinion of the Commission of the Statute of Deputies is necessary. Borràs asked this weekend to annul that article, but the spokesperson and deputy general secretary of the ERC, Marta Vilalta, has rejected that there are "changes tailored to the needs of a person".

“She has to make a decision and not only taking into account that she is Mrs. Laura Borràs, but that she is also the president of the Parliament”, Vilalta pointed out, who has also demanded that “the institution, the Chamber and the honorability of Catalan institutions”.

JxCat sources frame the statements of Aragonès, who has gotten wet more than he had done on other occasions, in an attempt to raise a "smokescreen" due to the "nervousness" of the formation to try to make his dialogue strategy give results.

In the environment of Borràs, who believes that the Republicans will wear themselves out if they push the president of the Catalan Chamber towards suspension, they defend that article 25.1 be applied but with a favorable opinion that allows the also president of Junts to lead the institution. "Deputies of the Parliament may be suspended from their parliamentary rights and duties, with the prior reasoned opinion of the Deputies' Statute Commission, in the following cases: a) If the indictment or opening of oral proceedings is final and the Plenary of the Parliament agrees by an absolute majority, given the nature of the alleged facts b) By agreement of the Plenary, adopted by an absolute majority, if they have been sentenced by final sentence to a term of deprivation of liberty that makes it impossible for them to attend plenary sessions ". The first assumption would apply, since there is no absolute majority, if ERC and the CUP join JxCat and support the pro-independence leader, there would be no suspension.