First meeting of the Consell Executiu with the absence of Jordi Puigneró, dismissed on Wednesday as vice president, and perhaps also the last with the ministers of Junts. 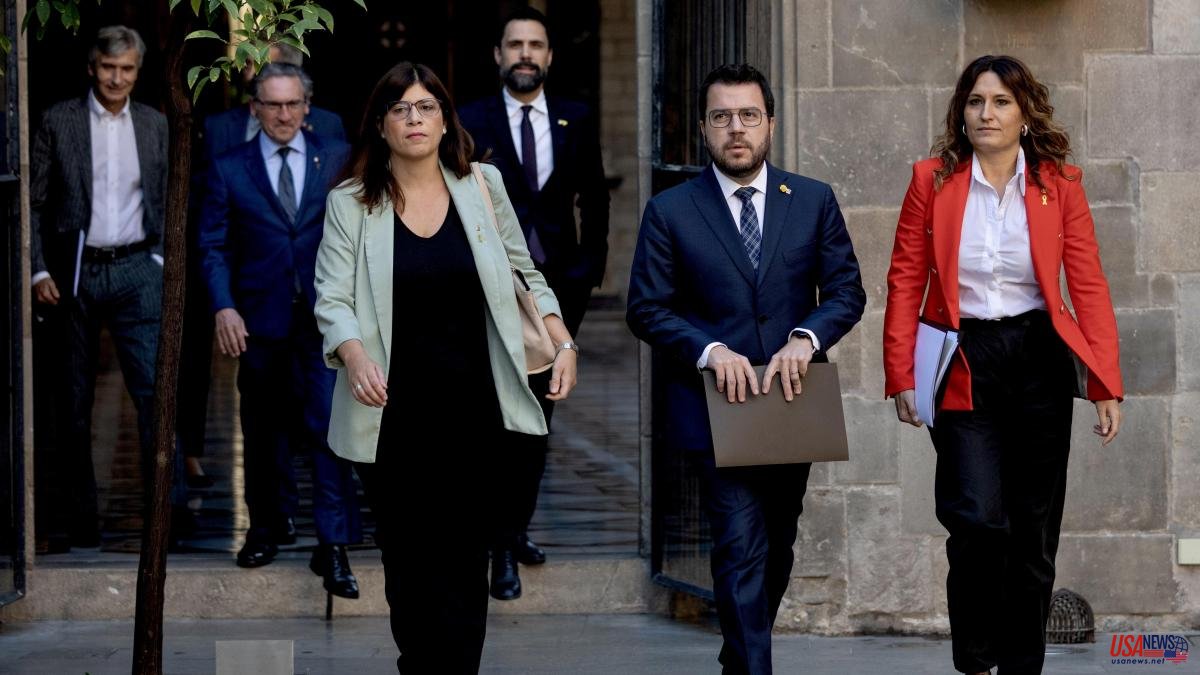 First meeting of the Consell Executiu with the absence of Jordi Puigneró, dismissed on Wednesday as vice president, and perhaps also the last with the ministers of Junts. The Government continues its ordinary activity in the sectoral field, but is fully attentive to Junts' consultation with its militancy, which must settle this Thursday and this Friday if the formation remains in the Catalan Executive. During today's meeting, Pere Aragonès asked the ministers to "be at 100% and working to the maximum", but he did not avoid referring to the possible fracture between ERC and Junts and made it clear that he is committed to the continuity of the Catalan Cabinet of coalition.

Likewise, he has expressed before all of them that he will not call elections if the rupture is consummated, something that implies that he is willing to govern alone if necessary.

Aragonès is working on a plan in case this last case occurs. "The Government and the president do not improvise," stressed the spokeswoman for the Catalan Executive, Patrícia Plaja, who added that the decisions will be made by the head of the Government "with agility and in the shortest possible time." However, Plaja has not advanced if Aragonès has names in mind to occupy the positions that the Junts ministers could leave, or if some restructuring is planned if the option of getting off the car is the one that comes out successful in the consultation of the postconvergents.

The spokeswoman recognized this afternoon that today's ordinary meeting took place in "a context that is exceptional" because the composition of the current coalition government has to be studied by the Junts militancy. The president has expressed in the Consell Executiu that what may happen this week "is important" to clarify the political panorama in Catalonia, but above all he has made it clear that "the internal debates" in Junts must be resolved, "or at except those debates that can condition the proper functioning of the Government".

The president has expressed his wish that the current ERC-Junts coalition can continue and that it does so fully committed to "improving the lives of Catalans", Plaja affirmed. Aragonès has asked all the ministers, as explained by the spokeswoman, to be at 100% and working to the maximum. “Complex moments and days are coming, economically and socially, that require maximum dedication”, and, therefore, it is necessary for nothing to stop.

These have been in general terms, the clear and direct instructions of the president during the meeting of the Consell Executiu. "We must deploy sectoral policies and move the country towards independence."

The objectives of the Pla de Govern have been fulfilled, according to the Government, in a 40.5% compliance. By sectors, it ensures that 43.7% has been completed in terms of the "green transformation"; in the social area, 41.1%; as soon as progress towards self-determination 36.7%, and in feminist transformation 34.1%.