The history of Western comics –manga is separate– summarized in an exhibition with 350 pieces, of which more than 300 are original, many of them authentic gems, with a chronological and geographical journey dressed in a prodigious ad hoc setting, all suitable for both scholars and neophytes. 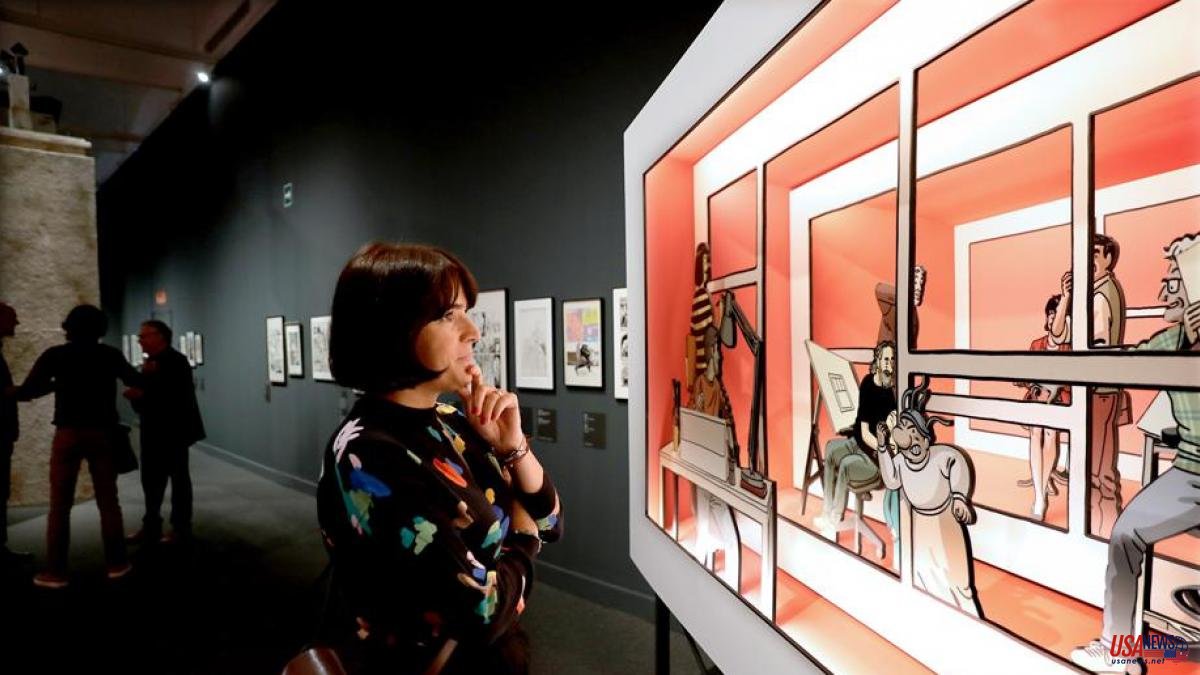 The history of Western comics –manga is separate– summarized in an exhibition with 350 pieces, of which more than 300 are original, many of them authentic gems, with a chronological and geographical journey dressed in a prodigious ad hoc setting, all suitable for both scholars and neophytes. It is the Comic exhibition. Dreams and history –until January 15–, which opens the CaixaForum Barcelona season.

It is a reflection of the recovery of comics as an art that is not only aimed at children, an evident fact if we take into account its profusion in the written press of all kinds, as the reader of La Vanguardia can verify, without going any further, reading the strips by Fred Basset, Garfield or Lio, but also the Ninots with which Toni Batllori analyzes day-to-day politics or the Apuntes del natural by JL Martín, or the recent commitment to journalistic comics with Oriol Malet. The deputy director general of the La Caixa Foundation, Elisa Durán, insisted yesterday that until recently comics were still seen as an "ephemeral and insignificant" art, but thanks to the claims of people like the artist Roy Lichtenstein, the filmmaker Quentin Tarantino or the semiotician Umberto Eco, is putting himself at the level that corresponds to him and his influence in the whole culture, but above all in the audiovisual, is evident. Durán also explained that it links with the exhibition Graphic Constellation. Young avant-garde comic authors who will open the CCCB in December, with whom they have coordinated.

The exhibition covers more than one hundred years of history, from the beginning with The Yellow Kid, by Richard Felton Outcault, considered the first modern comic, which already in 1896 included texts in balloons and laid the foundations of the genre in the North American press of the epoch. Next to it, the iconic Little Nemo bed – the work of Ignasi Cristià, like the rest of the immersive sets – stands next to an original drawing by its author, Winsor McCay. It is one of the novelties in Barcelona (it had previously passed through Madrid), as well as a new original of George Herriman's Krazy Kat or the original of a cover of El Víbora by Nazario.

The curator of the exhibition, the collector and gallery owner Bernard Mahé, yesterday claimed the role of collectors as "saviors of this heritage", because for many authors "the originals were not important, what they wanted was to publish", and also often they thought that the originals belonged to publishers, who often mutilated them to reuse parts or resubmitted them to make corresponding versions in other languages. And while the interest in comics increases, so does the price of these works, and with related film releases even more. Hergé's drawing shown on this page, for example, is valued between 1 and 3 million euros, and there are barely ten originals in private hands, of which two can be seen at the CaixaForum.

Among the illustrations that can be seen, there are all kinds, apart from those already mentioned, pages of Flash Gordon, by Alex Raymond; Will Eisner's The Spirit; Frank Miller's Sin City; Dave Gibbons and Alan Moore's Watchmen; Arzach, by Moebius or Asterix by René Goscinny and Albert Uderzo. Asterix stars with his friend Obelix in two giant sculptures with which visitors can take their pictures. The originals also include three strips of Quino's Mafalda that have come out of Argentina for the first time.

Spanish comics also have a prominent space, in this case with the collaboration of Vicent Sanchis. In this room stands out, in the middle, a replica of 13, Rue del Percebe by Francisco Ibáñez, or a piece designed by Paco Roca, in which some colleagues are represented by his side such as Purita Campos, Ibáñez, Escobar, Nazario, Max, Gallardo, or Canals and Guarnido. You can also admire an Opisso TBO Almanac from 1918, along with classics such as Captain Trueno or El Jabato, but also Ibáñez or Manuel Vázquez, and authors who published from the sixties, such as Enric Sió or Carlos Giménez, and the who are incorporated from the underground, such as Max, Miguel Gallardo, Nazario or Jordi Bernet, without forgetting women, such as Pili Blanco, who first entered magazines for girls and progressively gained ground, until today they are on par with men , as Sanchis explained.

It is a contextualized exhibition – and as a result of which there will also be a series of talks and workshops – that continues to this day, with a final part that highlights a selection of Spanish authors such as Marta Altieri, María Medem, Santiago Sequeiros, Kim or Ana Galvañ. An opportunity to explore graphic literature.