Spain returns to a final phase of the Davis Cup. 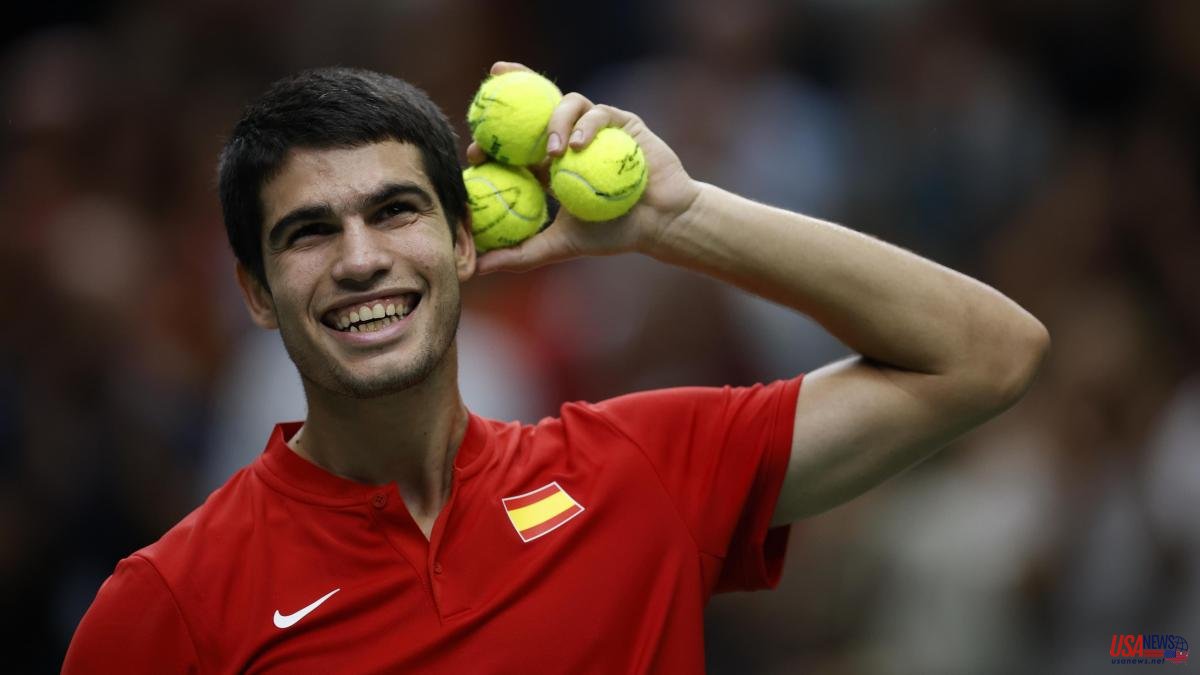 Spain returns to a final phase of the Davis Cup. After being left out last year, the Navy confirmed this Sunday in Valencia that it will go to Malaga at the end of November thanks to the victories of Roberto Bautista and Carlos Alcaraz in their matches against the weak but proud South Korea.

The US Open champion had the responsibility of adding the final point and he fulfilled it, although to knock down Soon Woo Kwon he had to sweat a lot (6-4 and 7-6 (1)). Far from the overwhelming version of him in New York, surely the result of the physical and emotional downturn that winning a Grand Slam entails, Alcaraz must be applauded for his effort and dedication to help the team captained by Sergi Bruguera to be among the eight best .

Canada's previous victory over Serbia parked the cabals. Spain depended on itself to get the ticket if it beat Korea in its series. No other option was worth it. If they win, they would also qualify as first in group B, having more points than the North American team (second), who had won against the Spanish.

The Asians, already eliminated, were a propitious rival to settle the matter in the individual duels and avoid playing with fire in the doubles. Spain had the task of winning and convincing at La Fonteta. The public could not walk away with another disappointment after seeing the new world number one lose against an energetic and inspired Auger-Aliassime. But before Alcaraz's turn came, he had to solve the paperwork for Bautista.

Seong-chan Hong was no match for the man from Castellón. Lost in the ranking (#384), he survives in the world of tennis by playing minor tournaments on his continent. La Davis sometimes invites surrealism, but not this time. Reliable as he had been throughout the week, Bautista did not give rise to surprise. And that these a priori duels so unequal can sometimes put more pressure on the favorite. An unexpected mistake and everything gets complicated. Indisputable 6-1 and 6-3 to score the victory, as against Serbia and Canada.

It was time for Alcaraz against a rival with a cheat. The 74th in the ATP is a player who has a hard time getting into the last rounds but who grows when he represents his country in Davis. Before the defeat against the Serbian Kecmanovic last Thursday, he had chained seven wins, the last one of prestige against the executioner Auger-Aliassime.

The one from El Palmar knows how Kwon spends them. In the only precedent between the two, in this year's Godó, he was able to scratch him. With much more at stake than the honor of his country, the leathery South Korean played with amazing ease, squeezing a less fierce and more restrained Alcaraz into his expressive body language.

The rest, Kwon bothered the Murcian throughout the match. He had nothing to lose from the Korean and chose to show off on a big date. At 24 years old, he has the quality to continue growing. Due to the level of him shown, Alcaraz's attitude on the court must be valued, a slow cement court that did not help him to run the ball either.

Without the consistency of other matches, he managed to take the lead in the fourth game but could not hold his serve. As he was serving for the set he suffered a broken love. Only his extraordinary ability to react allowed him to return the break to win the set.

Much more uphill had the second. A Kwon who came to everything got 3-1 and was one ball away from 5-2 that would have been insurmountable. But Alcaraz did not give up. He was only able to equalize the partial by hurrying his blows to the maximum. In the tie-break Kwon was much more fragile and the US Open champion barely let him breathe. "Without the support of the whole team it wouldn't have been possible," he said after the game.

Spain's rival in the quarterfinals will be the always dangerous Croatia, finalist in the previous edition. Surely Martín Carpena will be a factor to take into account, as it will also be if Alcaraz has Rafael Nadal at his side. Italy, the Netherlands, the United States, Germany and Australia are the other qualifiers that will try to win the Salad Bowl the week of November 22 to 27. Djokovic's Serbia will not be there. His absence has been too sensitive for his country, which finishes third in the group of Spain.