Thick, perhaps weighed down by the weight on his shoulders of number 1, Carlos Alcaraz debuted his reign on the ATP circuit with a loss to David Goffin (7-5, 6-3) in the first round of the Astana tournament. 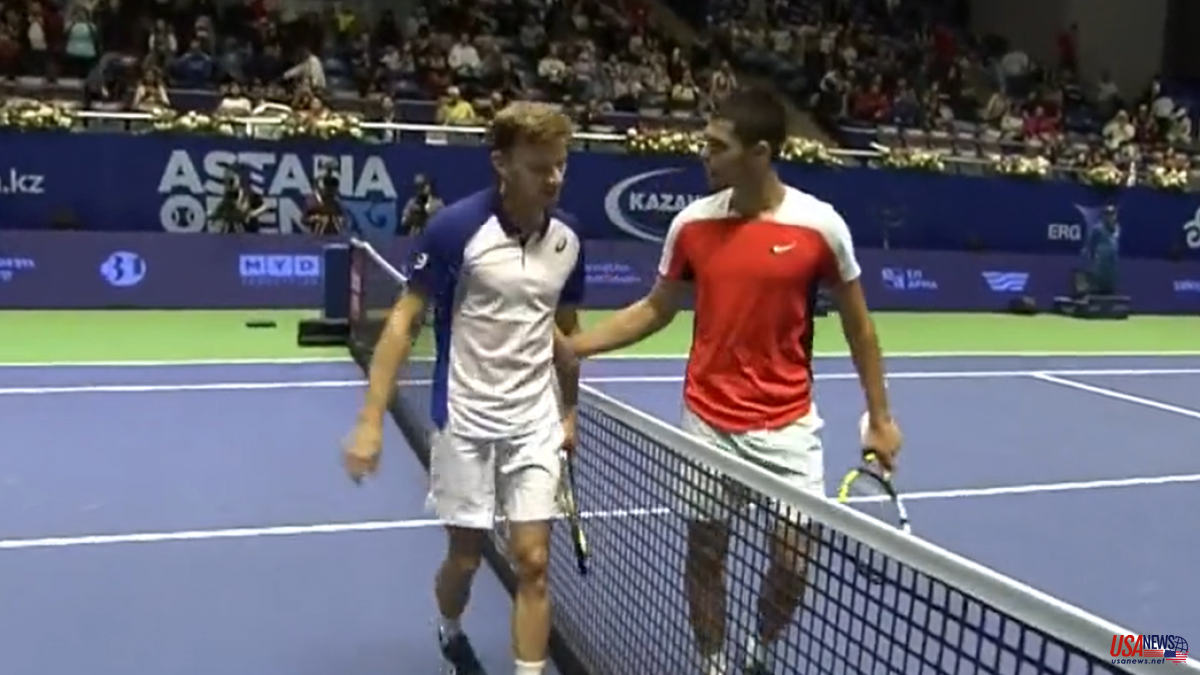 Thick, perhaps weighed down by the weight on his shoulders of number 1, Carlos Alcaraz debuted his reign on the ATP circuit with a loss to David Goffin (7-5, 6-3) in the first round of the Astana tournament. The Murcian, who usually flies over the track accompanied by a smile, was slow on the legs and misplaced on the Kazakh track against an inspired and very fast rival, who reached all the balls.

The Spaniard, brilliant champion of the US Open and key in Spain's confrontation with South Korea in the Davis Cup, accumulated 34 unforced errors for only 15 winners, very few for a player with multiple resources who is used to hammering his rivals with unapproachable blows. He was not fine with his 'house brand' drop shots, he was unsuccessful in the volley and imprecise with his right hand, without a doubt his best weapon.

After starting the match saving two break balls on his first serve, the player from El Palmar seemed to get the first set back on track by getting his first break in the next game. Nothing is further from reality. The Belgian reacted immediately with another break and took a run until 5-2. Alcaraz rowed to level the match again, but in the eleventh game he again accumulated errors until he sank to the knee without much opposition. An inverted forehand far from the margins, a missed drop to the net opened the door to the final break for Goffin.

The second set did not serve to see the resurgence of the Murcian, but to certify the state of grace of Goffin, a talented player although diminished in his career due to injuries, who further improved his performance and boycotted Alcaraz's possible reaction with solid tennis, unable to find his best version. With a serious face and no gestures in his body expression that invited optimism, Juan Carlos Ferrero's pupil found himself 3-0 against in the blink of an eye.

Against the ropes, he brought out his competitive gene, champion despite his 19 years, and let go of his arm. He collected some merit shots that gave him hope, but Goffin didn't flinch. The one from Liège extended his advantage with two breaks, with a 5-2 in the electronic, and the Spanish resisted the defeat recovering one of the breaks. Alcaraz put pressure on the rest with 5-3 against, although it was already too late against an opponent battle-hardened in a thousand battles who knew how to deal with the pressure. A ball to the line and a carat passing, along with Alcaraz's umpteenth mistake, ended up breaking the resistance of number 1, who for the first time this year, after 63 games, was defeated without winning a set.

It was better for Roberto Bautista in his premiere in Kazakhstan. The man from Castellón won against the odds in two sets against the Canadian Félix Auger Aliassime (6-4 and 7-6(6)), one of the candidates for the title. Jaume Munar also gave the surprise, in this case in his debut at the Tokyo tournament, by beating Casper Ruud (6-3 and 6-3), US Open finalist and number 3 in the world, as well as first seed of the Japanese tournament.