When on August 27, 2021, the President of the Government, Pedro Sánchez, announced the end of Operation Antígona – launched for the evacuation of Spanish collaborators in Afghanistan – he used the military expression: “mission accomplished”. 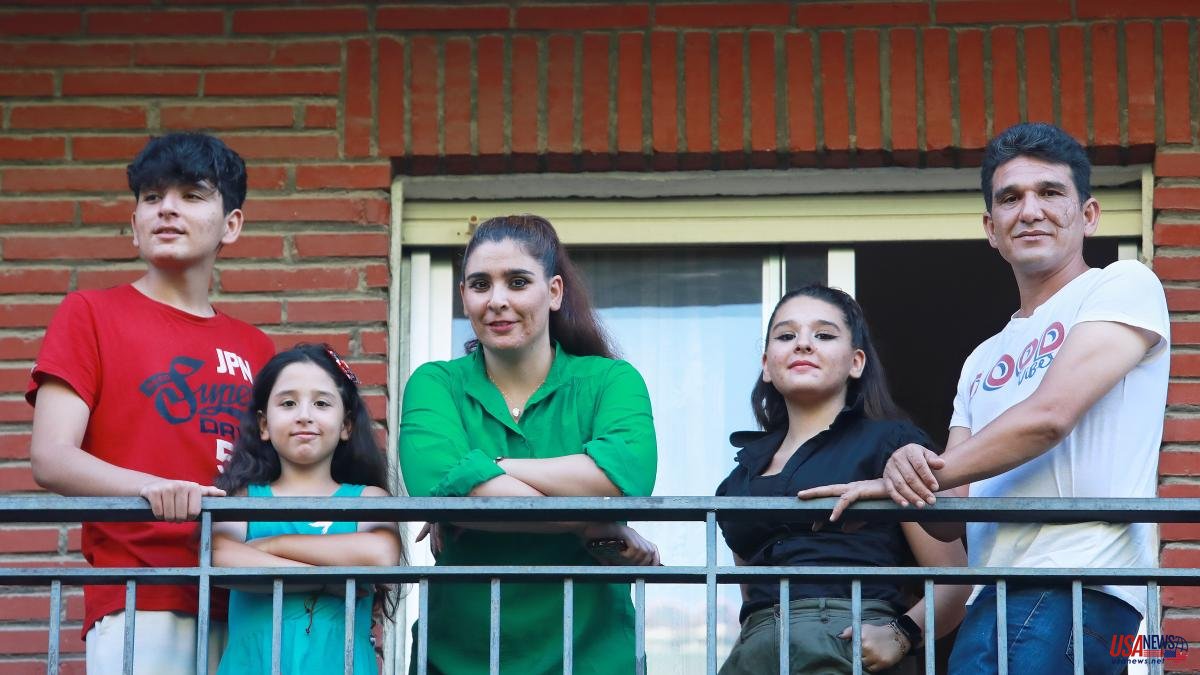 When on August 27, 2021, the President of the Government, Pedro Sánchez, announced the end of Operation Antígona – launched for the evacuation of Spanish collaborators in Afghanistan – he used the military expression: “mission accomplished”. In two weeks, 1,723 Afghans arrived fleeing Taliban terror with the intention of staying in the country. An operation broadcast almost every minute that was described as “a success”. "Exceptional". "Without precedents". However, when the lights went out at the Torrejón airport (Madrid), not everything was finished: that day the new life began for dozens of families who during this first year have tried to put down roots in Spain on a path with obstacles to reach their economic and social autonomy.

Saboor Mashall does not miss a single date in the vertiginous chronology with which he recalls the journey he lived to escape from Afghanistan with his wife Wajiah and their three children. They left Qala-i-Naw, her hometown, where a decade ago she had worked for the Spanish Agency for International Development Cooperation (Aecid) on projects to facilitate the independence of Afghan women. Something that made him an enemy of the Taliban. He was designated as "The man with the scar", in reference to the mark of a wound that he has on his face. He says that the moments of greatest anguish were experienced at the gates of Kabul Airport, where the Mashalls remained in the crowd for 20 hours without moving so as not to miss their turn to access the premises.

On August 22 they landed on Spanish soil. There, in the temporary camp, they were informed of the program and referred to the reception system that aims to facilitate progressive autonomy with individualized integration itineraries that, theoretically, include accommodation and maintenance, social intervention, legal and psychological assistance. or guidance and training for employment. This family, which has covered the rent and essential expenses for food, electricity and gas, complains about the little out-of-pocket help they receive: 50 euros per month for adults and 20 euros for minors. Mashall's low level of Spanish prevents him from even pronouncing the word "inflation", but he expresses himself perfectly in English to explain how everything has become more expensive without that economic allocation having increased.

During the interview, Mashall repeats many times that what he really needs is a job. Something that she has not found in these 12 months. He seems to excuse himself because his resume "only" occupies a page, but years of experience in qualified positions in international companies at 37 years old are compressed into it. He studied Political Science and has led gender projects. The same degree as his wife Wajiah, who has taught at the university for more than a decade. They are aware that the language handicap is what hampers their hope of obtaining a work contract, which in turn allows them to find a rental apartment to leave the reception system. At the moment, he is taking a masonry course.

Ignacio Álvaro worked in Afghanistan during the years in which Spanish cooperation was deployed in the province of Baghdís. It is there that he met many of the refugees who arrived in August, but also those who stayed at the gates of the Kabul airport and have been able to arrive later through Pakistan or Iran. According to Foreign Affairs, 920 asylum requests have been made in these border countries. In a telephone conversation he recalls that the Afghan aid workers were not translators, but technicians with advanced profiles: architects, engineers, gender policy trainers, doctors... And these are the same ones who are now looking for job opportunities.

Mohammad Sadiq has already left the first phase of the reception program, after being able to rent a room in a shared flat in Vallecas for 350 euros a month. He does accounts and it is the same, approximately, that he receives help for food. Despite the fact that he has been receiving Spanish classes this year, he warns that his “little Spanish” because he finds it difficult to concentrate when studying: “I think of my family who stayed there, how the country is, in my uncertain future here …”. According to his contract, he works two hours a day in a Turkish bar in the center of Madrid. They are always more. Meanwhile, his resume shows that he has a degree in Agricultural Sciences, a master's degree in Environment and is pursuing a doctorate at a Chinese university. Right now he is not considering going back to Afghanistan.

Some Afghans who arrived in Spain have moved to other European countries such as Germany or the United Kingdom. All the autonomous communities welcomed evacuees. Castilla y León, Catalonia and Andalusia were in the lead, in a policy of dispersion followed by the Ministry of Inclusion to avoid ghettos between families.

An Afghan journalist critical of the Taliban writes Ahmad's name on a notebook. A fictitious name with which to refer to him for fear of reprisals. In his cell phone he keeps the photographs of how the windows of her house looked after the radicals shot her the day they took over the city where she lived with her family. After arriving in Torrejón they were sent to a reception apartment in Pamplona. There, as he recalls, his mother and his wife spent "two weeks crying" because of the loneliness they felt. So, they decided to go to a German city where some relatives live. However, a few months ago they decided to return to Spain, with more encouragement, to start from scratch.

1,910 Afghans entered the reception system. The dance of figures is due to the fact that a number of those who arrived did not have Spain as their final destination or did not want to enter the program. Currently there are 1,208, so there have been 702 departures. In other words, one in three Afghans who arrived have left the system. According to the ministry led by José Luis Escrivá, the reasons why they decide to leave are "several" and the refugees do not have to report them. “In general, the people who leave are because they can now be self-employed, find work and decide to live on their own; sometimes they go with family or friends”, they explain. The Ministry of the Interior has granted 1,527 asylum requests. According to the testimonies collected, countries like Germany have a large Afghan community that makes displacement attractive; added to a more direct support system. And more job opportunities.

Najiba Ahmady does not consider leaving Spain. At 46 years old, she waits in an apartment in Ciempozuelos (Madrid) to meet her husband again, who could not fly with the transport chartered by the Ministry of Defense in August, as she and three of her children did. The rest stayed in Afghanistan. Among them a daughter who this Thursday sent him photographs from the hospital with her newborn granddaughter. Like the rest of her compatriots her age, she has serious difficulties communicating in Spanish. She breaks down crying when she is asked if she has put down roots in Spain. She turns to her mobile and writes in Persian on her translator: "I am happy, but I left my country." A phrase that she has memorized like a mantra is “I really like working”, despite the fact that she has not yet added a single day of contributions to her working life in Spain. She studied Law and in the folder in which she keeps her titles and letters of recommendation from her, there is no room for one more page.

His daughter Firoza, who also went to university but would now settle for a job doing pedicures after taking a course in it, helps him with the language. Like Sodais, the firstborn of the Mashalls, she does with his parents. They are the generation of young Afghans who have adapted much more easily. They say that they have not felt discriminated against in the past year and claim to want to continue studying. Sodais, who even speaks with an accent, will start high school in September with a clear goal: to be a doctor like his grandfather.

Academic training is also the path that cousins ​​Qudsia and Shukria Salimi have taken. They arrived in Torrejón on August 26 as relatives of a former Afghan translator who worked for the Spanish troops. During this first year, they have focused their efforts on learning Spanish through a course at the Camilo José Cela University, where classes will begin thanks to a program that will grant scholarships to 40 Afghans to study Vocational Training. The areas most chosen by future VET students: Computer Science, Administration and Finance, and Transport and Logistics. The young women say that they think “positively” when they look to the future that awaits them. But, at the moment, very far from his country. There, the Taliban are in charge of erasing women again. They have been at it for 12 months.