A thick Barça wastes the opportunity to be the leader alone

Barça left the lead alone in the Euroleague at La Fonteta de Sant Lluís against a combative Valencia Basket that was always much better (84-83). 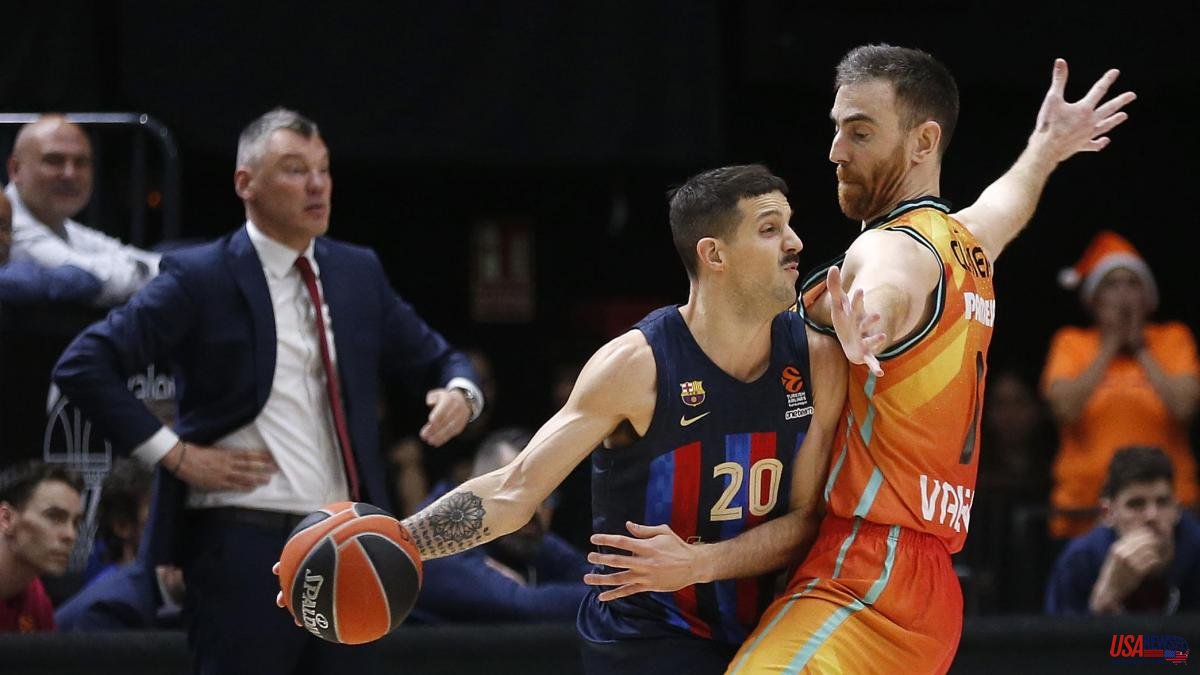 Barça left the lead alone in the Euroleague at La Fonteta de Sant Lluís against a combative Valencia Basket that was always much better (84-83). The great performance of a Laprovittola (28 points), without the support of a blurred Mirotic (1 of 8 in triples), and Satoransky, Kalinic or Higgins missing, was insufficient to avoid the fifth defeat in Europe.

With Monaco's defeat, there was a five-fold tie at the head of the Euroleague with the Blaugrana, the Monegasques, Fenerbahçe, Real Madrid and Baskonia.

Jasikevicius came out with his starting lineup, with the exception of center Sanli, out due to an intestinal virus. The absence of the Turk was not a problem to take a first promising advantage, the 8-14 put by Vesely, his replacement in the paint.

Two triples from Laprovittola led to a maximum income of 7 points (12-19), but Barça returned to the irregularities and fell prey to the good hand of Jasiel Rivero, author of 6 points in a row to put the tie on the horn (20-20). The Cuban, according to Jasikevicius, "is one of the most important players because he gives them a lot of character and toughness." And so it was demonstrated.

In the second set, Jasikevicius made use of Cory Higgins, who was returning to the team after overcoming a sprained ankle, which left him out in the previous game with Unicaja. The entry of the American did not provide the necessary calm in the baton and Valencia rose to 5 points with a triple from Prepelic (26-21).

Despite the fact that the blaugrana managed to equalize twice (at 26 and at 30), they were especially thick in attack, so the taronja accelerated and reached a maximum income of 7 points (41-34); an income made up by Mirotic from free throws (41-38) to go to the break. "We are lucky to only be three down because we are not competing," Jasikevicius pointed out.

The Montenegrin signed the worst game since his return from injury. Mirotic, in almost 13 minutes, had only scored 4 points, in 1/2 of two, 0/3 in three-pointers and the two free throws, in addition to one rebound, one assist and one loss. Very loose. Vesely, with 12 points, and Laprovittola, with 8, pulled the blaugrana car.

On the way back from the changing rooms, Barça appeared with their batteries recharged, more in tune and tougher. He was able to link a 2-10 run (with 4 points from Mirotic) and recover a lead of 5 (43-48) that forced Àlex Mumbrú to stop the clock.

The reaction of Valencia did not wait. A run of 11-3 and again ahead (54-51) in the midst of a blaugrana mess of losses, fouls in attack and an absolute lack of leadership and control.

Jasikevicius brought on Álex Abrines, back after almost a month out due to low back pain, to seek more order and direction, and accompanied him by Kuric and Nnaji, fresh blood that he needed to find a boost. He was able to fix it a bit and minimize the damage with a partial in the 21-21 period that kept him at -3 (62-59) and everything to be decided in the last 10 minutes.

Barça entered the last set hoping for Laprovittola's fifth triple to get within 3 points (65-62), but Harper turned on the alarm lights again for Jasikevicius, who had to call time with 69-62 still to go. of 7 minutes. Harper led Valencia to its maximum income, 9 (71-62), and the Blaugrana team saw the hole as darker and smaller.

Tobey put Barça within one possession (72-69) with 5 minutes to go, but Dubljevic's mistakes and success restored Valencia's superiority, which was going from 10 with 3m20s to go (79-69). It was the moment in which he began to play desperately with triples. And it seemed that the risky bet was good: Laprovittola's 6th three-pointer (79-75 with 1m26s to go) and Mirotic's first (in 8 attempts) brought Barça to life with 14 seconds to go (81-80).

Dead time and ball for Valencia. Quick free kick from Kalinic to Jones, and the American did not fail (83-80), without the clock moving. In their last attack, Barça gambled with Laprovittola, shooting a three-pointer from more than 7 meters with 4.3 seconds to go. He failed and Valencia took the win, finished off by Jones (84-80), despite Kalinic's three-pointer (84-83).