The refoundation of Ciudadanos, which should culminate next January to place the party on the takeoff ramp of the municipal and regional elections of May 2023 with minimal guarantees of taking flight, ran into an obstacle yesterday placed on the track by the own ship's crew. 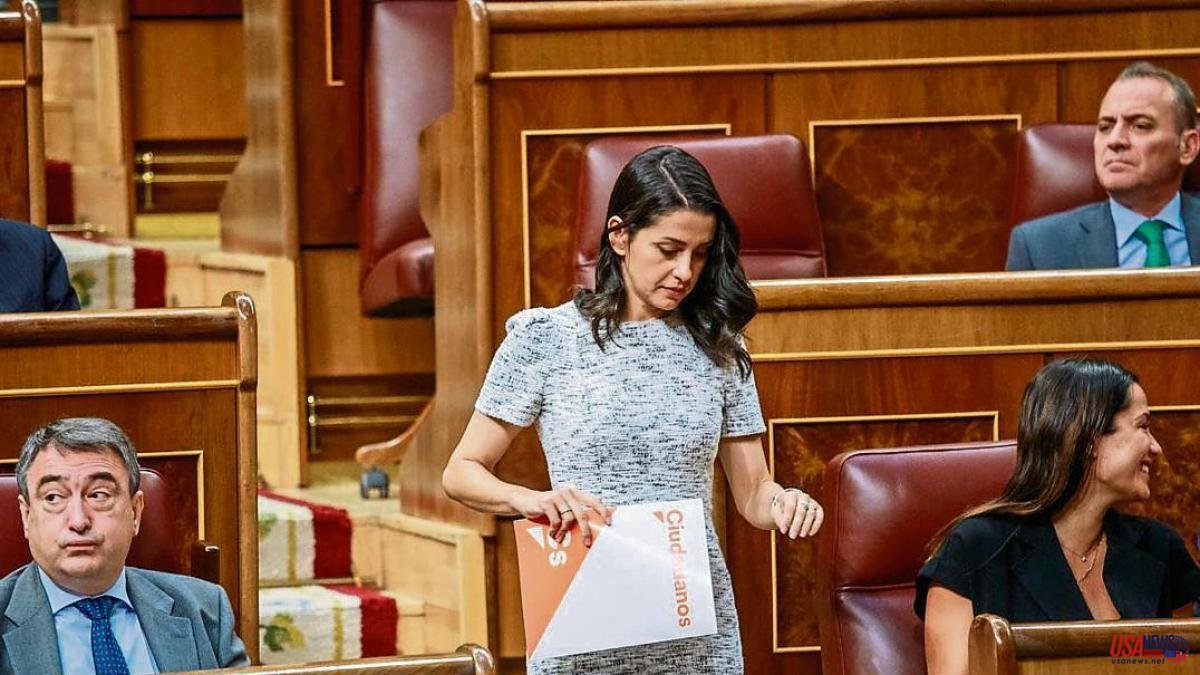 The refoundation of Ciudadanos, which should culminate next January to place the party on the takeoff ramp of the municipal and regional elections of May 2023 with minimal guarantees of taking flight, ran into an obstacle yesterday placed on the track by the own ship's crew. Mutiny on board.

A group of elected officials, mostly with responsibilities in Aragón, Asturias and the Valencian Community, published a manifesto in which, in very harsh terms, Inés Arrimadas is accused of being "a president detached from reality", which “uses Ciudadanos as a shield to hide its own crisis” and that “it does not step on the street”.

Articulated on the Somos platform, the signatories, led by the deputy mayors of Alicante and Zaragoza, disassociate themselves from the ongoing participatory process and demand the resignation of Arrimadas and his entire executive, with the urgent call for an extraordinary congress on the horizon: "It has The time has come to give the affiliates a voice and for them to decide what refoundation they want,” they say.

Nostalgic for the times of Albert Rivera, the critics avoid the votes of Congress, where Ciudadanos appears regularly aligned with PP and Vox, and question the "constant pacts" of Arrimadas with Pedro Sánchez to argue that "the problem is not the logo or the color” of the formation, but lies in the people who lead it, who “put their personal and economic interests before the general interest of the party and of Spain, entrenching themselves in their position”.

The barrage is órdago. "The strategic errors and the lack of self-criticism, with a flight forward, have been installed in the entire leadership of the party", denounces the manifesto, which, avoiding the refoundation process initiated after the disappearance of Citizens of the Andalusian Parliament, points out that "neither the continuous loss of electoral support nor the constant flight of affiliates and positions have caused a minimum change on the part of the leadership."

They are not unknown reproaches for Arrimadas: since the failure of the motion of censure in Murcia, the trail of defections has been constant in Ciudadanos. The last one, that of the one who was vice president of the Community of Madrid until Isabel Díaz Ayuso decided to go it alone, Ignacio Aguado, who a few days ago slammed the door. But this time the number and representativeness of the conspirators –among which there are several regional and provincial deputies– and the moment chosen to launch the attack –in full internal reform– can make the leader, who has not had a good wind since assumed the presidency in the lowest hours of the party and yesterday kept an eloquent silence, doubt, weary, on whether to give up the helm and abandon ship.

Aware of the growing weakness of Arrimadas, who has on occasion expressed his willingness to resign if the militancy so wishes, the promoters of the manifesto exploit the sentimental vein – “we altruistically left our skin to build this project” – and allude to to the “two souls” that today coexist in Ciudadanos to claim themselves as the pioneers in the defense of the original “ideas and values” against those who joined “in the heat of the polls, coming to a set table and demanding positions and positions ”.

The permanent executive of Ciudadanos reacted immediately to the challenge. Its spokesman, Edmundo Bal, rejected, with the customary vehemence, the accusations made in the manifesto and sent them to the channels opened in the refoundation process, which "is the path chosen by the party" to channel criticism and listen to all ideas. To counteract the magnitude of the challenge, the leader referred to the "large number" of messages from affiliates contrary to the Somos initiative, since the discussion forums for the refoundation are already underway, with some two thousand participants. .

As for the possibility that, given that some of the signatory positions of the manifesto are in government coalitions with the PP, there will be more leaks towards this party, Bal ruled it out outright. Alberto Núñez Feijóo, he argued, has put aside that "wrong campaign" of his predecessor. “Everyone who wanted to leave has left and those of us who are here are precisely to move forward,” he said, and wondered if the signatories' commitment to Ciudadanos is still firm.