A deputy from the Brazilian far-right, a member of President Jair Bolsonaro's party, drew a firearm and chased a black man through the streets of Sao Paulo on Saturday, in another incident of armed violence carried out by Bolsonaro supporters before the elections. 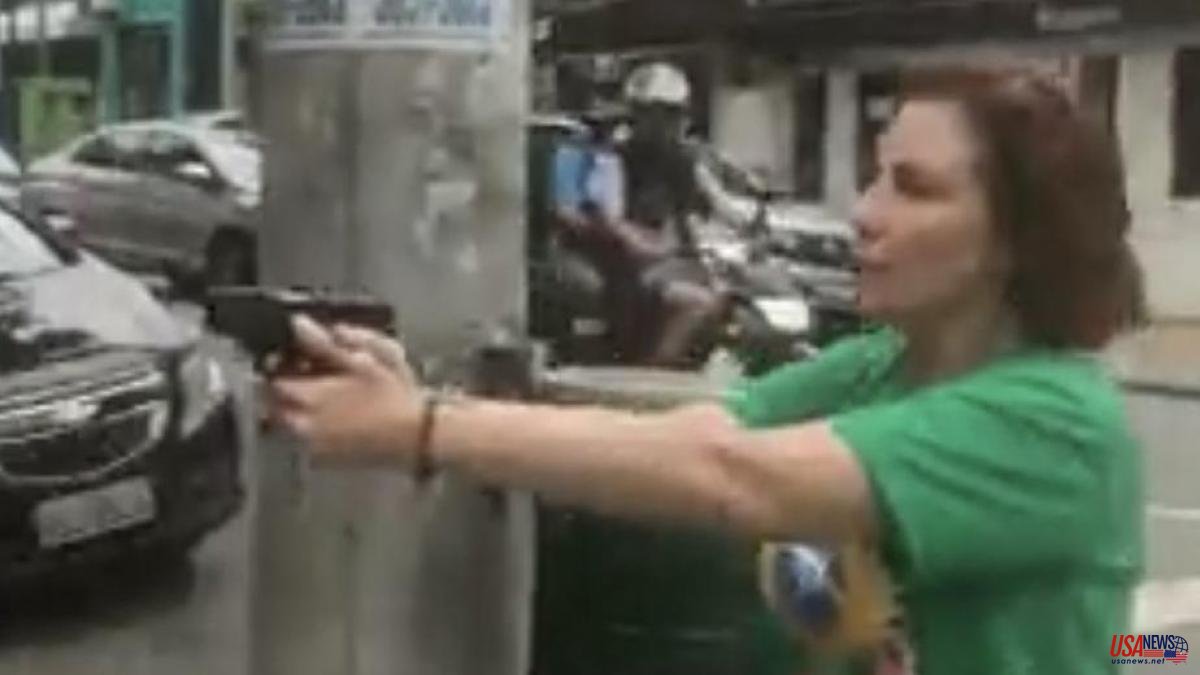 A deputy from the Brazilian far-right, a member of President Jair Bolsonaro's party, drew a firearm and chased a black man through the streets of Sao Paulo on Saturday, in another incident of armed violence carried out by Bolsonaro supporters before the elections. which are celebrated this Sunday.

The victim of the persecution, journalist Luan Araújo, a supporter of Bolsonaro's rival candidate, former president Luiz Inacio Lula da Silva, had argued with the deputy about the probable electoral result.

As can be seen in the numerous videos recorded at the scene of the incident, a busy street in the affluent district of Jardims, Carla Zambelli, a deputy for Bolsonaro's Liberal Party, exchanged strong insults with Araújo during an argument in front of a restaurant. When Araújo was already moving away from the place, she lost her balance and fell to the ground.

The deputy's fall triggered a manhunt for Araújo in which Zambelli and his two white accomplices, one of them a bodyguard, pointed their pistols at the black journalist. When Araújo sought refuge in a bar, Zambelli demanded at gunpoint that the journalist record a video of her to apologize for insulting her, according to Araújo and other witnesses.

In the same bar, Zambelli pointed his gun at the face of a young lawyer who happened to be in the bar. "I was wearing a T-shirt in support of Lula, he pointed the gun at me; I was scared and left the bar with my hands up," the lawyer told the Folha de Sao Paulo newspaper. "When I entered a bar, they wanted me to throw myself on the ground as if they were police," Araújo said.

After the persecution, the deputy recorded a video in which she accuses Araújo and the friends she was with of having attacked and spat on her. "They used a black man to assault me," she says in her video, which she recorded after her. "I was surrounded and assaulted as I left a restaurant," Zambelli tweeted. She added in remarks to the press afterwards. "There were about six people and they were armed."

But the videos don't support that version. Araújo's lawyer explained to the media that there was "a verbal disagreement from which Carla Zambelli lost her head and got excited; she was not attacked, she stumbled." This version is confirmed by one of the videos already in circulation in which Araújo is heard telling the deputy: "Lula wins tomorrow, you will go back to the sewers where you came from."

In a video, Zambelli is heard telling Araújo "You're spitting on me," while Araújo speaks close to his face: "Tomorrow it's going to be Lula!" Araújo repeats. There is no indication that Araújo or his friends carried weapons. The journalist was coming from a pregnancy celebration party, a baby shower.

Despite these testimonies and the videos that deny Zambelli's accusation, prominent politicians allied with the president reproduced the deputy's version on their social media accounts.

“Carla was physically attacked, pushed to the ground, spat on and insulted by a group of PT (Workers' Party voters, PT). This is how the PTists treat women. If she didn't have a weapon she would have been killed," tweeted Flavio Bolsonaro, the president's son, investigated for his relations with paramilitary groups in Rio de Janeiro.

One possible explanation for what happened in Sao Paulo is that Zambelli - who has been sanctioned by the Supreme Electoral Tribunal for her participation in the network of false Bolsonaro news, known as the hate cabinet - tried to take advantage of the verbal disagreement with Araújo to destabilize the elections.

"They try to provoke Lula's militancy to create a violent event and thus give the impression that each Lula militant is violent, which can be used to justify violent actions by Bolsonaro," said Luiz Eduardo Soares, in an interview prior to the incident in Sao Paulo. Paul.

The armed persecution of Araújo by the deputy and member of the hate cabinet comes a week after former Bolsonarist deputy Roberto Jefferson fired two grenades at the federal police who came to his home in Rio de Janeiro to arrest him. Jefferson was sentenced to pretrial detention and house arrest for his role in spreading fake news.