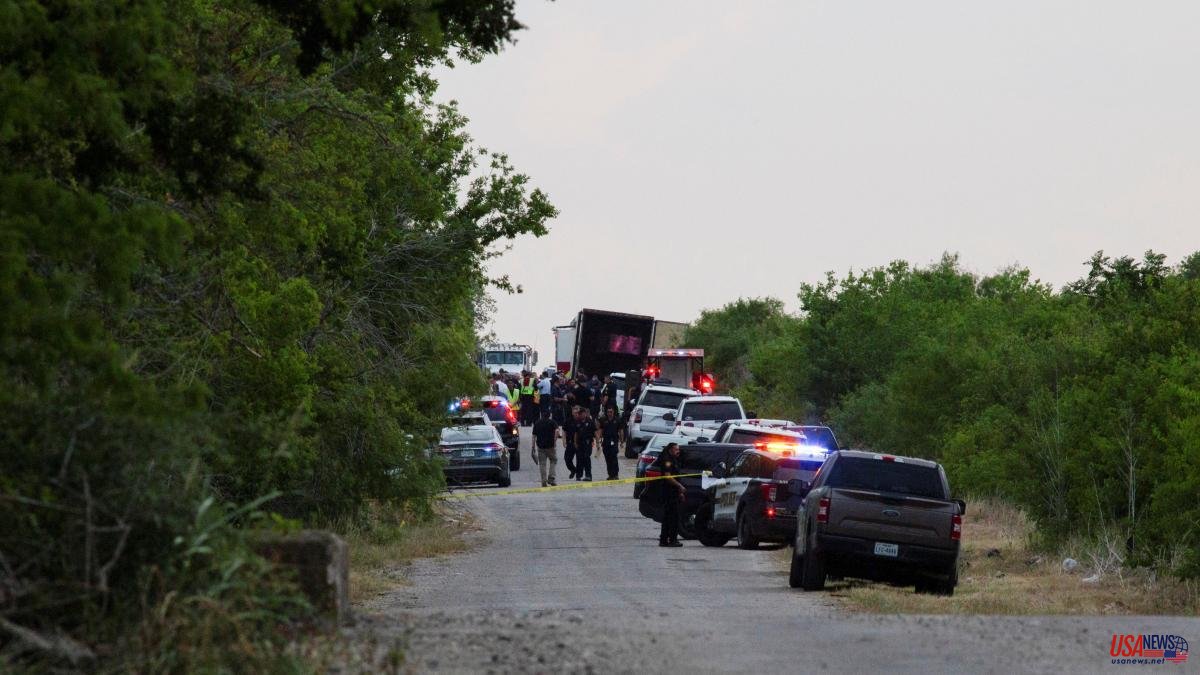 New human tragedy in the United States. At least 46 people have died and another 16, including four children, have been injured inside the trailer of a truck parked on the outskirts of San Antonio, on the Texas (USA) border with Mexico. This was confirmed on Monday by the US authorities, who are still investigating the cause of death. According to local media reports, they could have suffocated due to lack of oxygen and high temperatures.

Although they did not specify the nationalities of the victims or the total number of minors traveling in the vehicle, the mayor of San Antonio, Ron Nirenberg, explained that they were migrants who had crossed the border between Mexico and the US crowded into the truck. South Texas has long been the busiest area for clandestine border crossings. It is common that in the place where the trailer was found, in the surroundings of San Antonio, the first large city after crossing from Mexico, vehicles stop to unload migrants.

The truck was located by a municipal worker who was alerted to the situation by a cry for help coming from inside the truck parked on a secondary road shortly before six in the afternoon (local time) on Monday, according to the head of the Department. San Antonio Police Department William McManus. When officers arrived they found a body on the ground outside the trailer and the door half open. Hours later, the body bags lay on the ground as a symbol of horror.

At the moment, the authorities have not determined the cause of death, but the thermometers in San Antonio reached 40ºC this Monday, which could be a determining factor in the death of the immigrants. All 16 people who were hospitalized were hot to the touch and dehydrated (no water was found in the trailer), Fire Chief Charles Hood said. “They were suffering from heat stroke and exhaustion,” Hood added.

"It was a refrigerated tractor trailer, but there was no visible working air conditioning unit," Hood explained. Authorities do not know how long the dead spent inside the truck, which was abandoned by its driver minutes before police found it.

"It's a tragedy. There are 46 people who had families and were looking for a better life," Nirenberg said at a press conference, adding that the crime is being investigated by federal authorities. The mayor linked the event to the human trafficking networks that operate on the border and added that he hopes that those "responsible for putting these people in subhuman conditions are convicted." So far, three people linked to the event have been arrested, but it was not clear if they were really linked to human trafficking, confirmed McManus.

For the moment, the Mexican consulate in San Antonio reported that it will provide support to all "Mexican nationals, if any." Mexican Foreign Minister Marcelo Ebrard also referred to the event. "Tragedy in Texas. Asphyxiated in the box of the trailer reportedly. Consul en route to the point. Condolences to the victims and their families. We still do not know nationalities," he advanced.

It is one of the deadliest tragedies related to human trafficking across the US-Mexico border in recent decades. Ten people died in 2017 after being trapped inside a truck parked at a Walmart in San Antonio. In 2003, 19 migrants were found in a suffocating truck in the southeast of the same town.

Some migrant advocates drew a link between the event and the border policies of the Biden administration. Aaron Reichlin-Melnick, policy director for the American Immigration Council, wrote that he had been fearing such a tragedy for months. “With the border as closed as it is today to migrants from Mexico, Guatemala, Honduras and El Salvador, people have been pushed onto increasingly dangerous routes. Truck smuggling is one path to that,” he wrote on Twitter.