‘Knock them ... in the face’, Baylor coach says of parents afraid to enroll daughters

Kim Mulkey, the highly successful coach of the Baylor women's basketball team, offered a stirring and tone-deaf defense of the school as it faces allegations of sexual assault.After winning her 500th game as a head coach, Mulkey stood in the center of the... 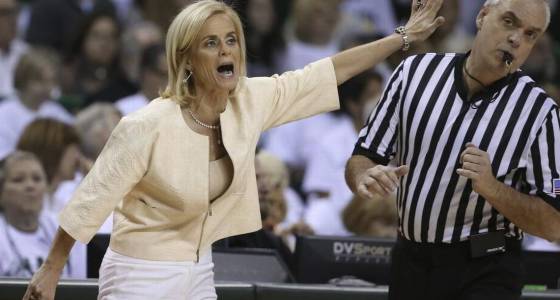 Kim Mulkey, the highly successful coach of the Baylor women's basketball team, offered a stirring and tone-deaf defense of the school as it faces allegations of sexual assault.

After winning her 500th game as a head coach, Mulkey stood in the center of the basketball arena and told fans, "If somebody's around you and they ever say, 'I will never send my daughter to Baylor,' you knock them right in the face."

The scandal, which has resulted in a lawsuit alleging that football players committed 52 sexual assaults over a four-year period, has cost Art Briles his job as football coach and brought about the exit of Ken Starr as the school's president and law professor, the athletic director and the Title IX coordinator.

Mulkey's remarks were met with cheers and she went on to call Baylor "the damn best school" in the country.

"Because these kids are on this campus. I work here," she told the crowd. "My daughter went to school here and it's the damn best school in America."

Mulkey explained in the postgame news conference that she was "just tired of hearing" about the school's problems.

"I'm tired of people talking on it on a national scale that don't know what they're talking about," she said after the Bears beat Texas Tech. "If they didn't sit in those meetings and they weren't a part of the investigation, you're repeating things that you heard. It's over. It's done.

"This is a great institution, and I would send my daughter here, and I would pay for anyone else's daughter to come here. I work here every day. I'm in the know. And I'm tired of hearing it. This is a great institution. The problems that we have at Baylor are no different than the problems at any other school in America. Period. Move on. Find another story to write."

Mulkey may be tired of hearing about the scandal, but that doesn't mean the story is going away any time soon. In January, a federal lawsuit was filed by a Virginia woman who alleges that she was gang-raped by two Baylor players in 2013. The suit goes on to allege that at least 31 football players committed at least 52 "acts of rape" over four years - including five gang rapes, two of which involved 10 or more players at the same time, some of whom videotaped the rapes on their phones and passed the recordings around to teammates.

Last spring, an independent investigation found that athletic department leadership left women on the Baptist school's campus at risk by discouraging victims from reporting assaults and suppressing accusations against Bears players. That investigation, conducted by a law firm hired by Baylor's board of regents, found 19 players accused of domestic or sexual assault by 17 women. Lawyers for the Virginia woman, who is identified as Elizabeth Doe, claim to have uncovered far more evidence.

In response to that lawsuit, the university said in a statement that it has made "great progress in implementing 105 recommendations to strengthen the safety and security of all students and restore faith in the University."