Dubai: Olympic champions Elena Vesnina and Ekaterina Makarova said their Dubai doubles win on Saturday was more nerve ranking than Rio due to rhythm lost by rain delays. The Russian pair registered their first Dubai victory in three appearances together... 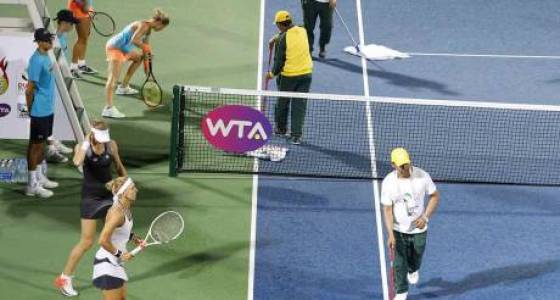 “At the beginning we felt really good rhythm and we felt we were controlling the game,” said Vesnina. “But then with these rain delays it became too much, even Roger [Federer] would have lost his rhythm in that.

“It was on and off, and they came back into the game and we got a little bit tired.”
Makarova said: “Towards the end we got nervous. Even in our Olympic final we didn’t feel that nervous.”

“It was like this match was just in our hands,” added Vesnina. “It wasn’t as though we had won it but we knew what we needed to do but then after the rain delays we didn’t know what to do. It was such strange rhythm.

“We were pumping ourselves up trying to support eachother because we knew how tough it was, the tie break can go away from you so quickly so you have to be very focused and supportive.”

With this being their first win of 2017 after losing the final in Brisbane and making the quarters in Melbourne, Makarova said it set them up well for another good season.

“We are playing really well at the moment ahead of the big tournaments that we are playing so we hope it goes well.”

Vesnina added: “This is a very prestigious trophy and the first time we’ve won it. Winning such a big title always gives us positive emotions for the next tournaments.”