Notre Dame High School girls basketball coach Josh Kopp considers Kelsey Gorman an “unsung player” for the major contributions she makes under the radar. Tori Esposito is – in a way – the opposite. Not because she gets undeserved attention,... 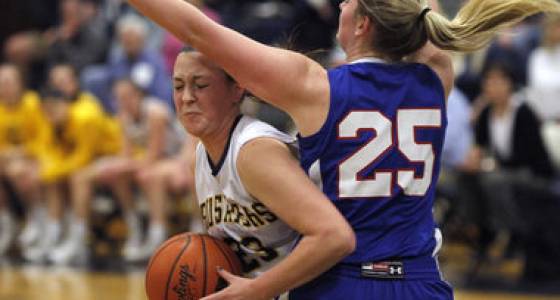 Tori Esposito is – in a way – the opposite. Not because she gets undeserved attention, but because she’s literally a singer.

Both seniors logged great performances on Friday night as the Crusaders defeated North Schuylkill 50-40 in the Districts 11/1 Class 3A quarterfinals at Northern Lehigh High School.

Notre Dame (20-5) advances to play District 1’s New Hope–Solebury, which defeated Jim Thorpe 42-33, in the tournament semifinals on Tuesday at a time and site to be determined. The Crusaders also clinched a berth in the PIAA tournament with the victory.

Notre Dame trailed 36-35 in the closing moments of the third quarter when Gorman, a guard, snuck in for a weak-side offensive rebound and putback to put her team ahead with 2 seconds on the clock. The Crusaders led the rest of the night.

Kopp considered Gorman’s board and score the play of the evening.

“She doesn’t score a lot but she’s such a steadying factor out there,” Kopp said of the guard. “She gets us into our offense and she makes heady plays. I’m just really proud that she was able to contribute in such a big way tonight.”

North Schuylkill (13-10) drew within 40-38 on a layup from junior Samantha Shinkus. Esposito, who sang the national anthem prior to the game, answered by hitting a jumper from the foul line and scoring a putback to stretch the lead to 44-38 with 3:18 remaining.

“She (provides) such a spark and energy off the bench,” Kopp said of Esposito. “She’s been that way all season long. We know we can sub her in and put her on the other team’s best player. She uses her defensive energy to give us some offense, too.”

True to the coach’s assessment, the senior was thinking about rushing to the other side of the court after both of her significant baskets.

“I’m not going to lie, it was an awesome moment,” she said. “But, I knew that as soon as I made the shots, I needed to go back on defense.”

Esposito has sung the national anthem before several Crusaders contests, in fact it’s considered a good luck charm between herself and scorekeeper David Bogusky.

“It’s just kind of a routine now,” said Esposito, who finished with nine points. “… It definitely gets me really excited for the game. I don’t get nervous anymore. It means a lot to me because that’s what I want to major in, in college.”

The charm worked on Friday night.

North Schuylkill junior Averi Jordan knocked down a 3-pointer, which would have made the game 47-43, but the basket has waved off for a moving screen prior to the shot. That play sunk the Spartans’ comeback hopes.

Jordan, who was dangerous in the post and from the perimeter, had a game-high 24 points.

Gorman paced NDGP with 11 points, in a performance that Kopp expects from a senior in a win-or-go-home scenario.

“Here we are February-March, playoff time, and it’s about the seniors stepping up and realizing ‘Hey, there’s some urgency here. My high school career could be over after this game,’” he said.

Beyond Esposito, Kopp pointed to players like Brianna Maslonka, Cassie Murphy, and Breene Carlin for chipping in off the bench as the starters were hampered with fouls.

For their part, Esposito and Gorman were both delighted to have more opportunities to play.

“It feels awesome, especially being my last year playing basketball,” Gorman said. “We all really wanted this … We just really didn’t want our season to end.”

“I love my senior class to death,” Esposito said. “I wouldn’t want to be playing with anybody else.”