Morgan Rielly called it the most important Leafs-Canadiens game since he arrived in Toronto in the fall of 2013. More than one scalper figured it was the most expensive Leafs ticket since the Leafs were in the playoffs in the spring of 2013.So it only made... 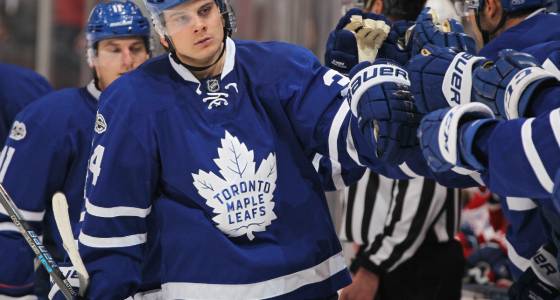 Morgan Rielly called it the most important Leafs-Canadiens game since he arrived in Toronto in the fall of 2013. More than one scalper figured it was the most expensive Leafs ticket since the Leafs were in the playoffs in the spring of 2013.

So it only made sense, if people were proclaiming Saturday’s game a big one, that Auston Matthews would somehow weave his way into the meat of its plotline.

Matthews, the 19-year-old savant of the spotlight, did it in the season opener, with his historic four-goal explosion in Ottawa. He did it on New Year’s Day, scoring the game-winner outdoors in the Centennial Classic. And so it couldn’t have been a surprise to anyone that Matthews found himself with the game on his stick on Saturday night, a breakaway in the opening minute of overtime, Toronto’s best player against the world’s best goaltender, Carey Price.

The result, as Maple Leaf fans know too well, was not home-crowd ecstasy at the ACC.

And then the puck hit . . . the knob of Price’s stick. Not Price’s heroically quick blocker. Not the sliding, shrugging shoulder of the visiting superhero in pads. No, what looked like the winning goal — what looked like another clip destined for Matthews’s Calder Trophy campaign video — was thwarted by the unknowing, unmoving shaft of a soundly outwitted goaltender’s stick.

As Frederik Andersen, Price’s Maple Leafs counterpart, said with a smile and a roll of the eyes: “Of course (Price) meant to do that, right?”

Said Price: “Any player will tell you he hates that, but I’ll take it.”

Indeed, as much as it had to infuriate the Maple Leaf that, all of 10 seconds later, Andrew Shaw scored to give the Canadiens the 3-2 overtime decision and a 14th straight win against Toronto, Saturday was as good a time as any to give Price a moment of due. The 2015 Lou Marsh Trophy winner as Canada’s athlete of the year reached another significant milestone with the victory, moving past the great Ken Dryden as the third-winningest goaltender in Canadiens history. Only Jacques Plante (314) and Patrick Roy (289) won more for Les Habitants. And Price looks destined to stand atop that podium soon enough.

But speaking of storied franchise lists, though Matthews was denied his overtime celebration, he still exacted his share of damage. Matthews scored twice — his 29th and 30th goals of the season in his 61st game — to become just the third Leafs rookie to reach the 30-goal plateau. Only Wendel Clark (34) and Daniel Marois (31) have scored more for Toronto as NHL debutants.

Maybe more impressive, Matthews has scored 26 of his goals at even strength. That makes him the fastest NHLer to pot 26 even-strength goals in more than 20 years — since Eric Daze scored 26 in 60 games back in 1995-96, according to the Elias Sports Bureau.

But after it was over, Leafs coach Mike Babcock shrugged off the significance of the stats.

“I didn’t spend any time thinking what his stats would be (before the season), just that he would help us win,” Babcock said. “That’s what I like about him. He helps you win.”

It’s been a long time since the Leafs won against the Canadiens — more than three years now. To give you an idea of how much time had passed since the last time Toronto beat Montreal — well, on that January night in 2014, Nikolai Kulemin led all Toronto forwards in ice time. Mason Raymond scored for the Leafs.

And certainly Saturday seemed like the perfect opportunity to break the streak. The Canadiens came into the game with the coldest offence in the league. They’d scored 13 goals in 10 games in the month of February. The Leafs, over the same time period, had scored 39 goals — precisely three times as many.

As Montreal captain Max Pacioretty told reporters: “We have to get our confidence back — get a little bit of swagger.”

Montreal’s swagger, of course, now resides in Nashville. But Toronto was missing a bit of its own. Still, even with rookie scoring machine Mitch Marner missing his fifth straight game with a shoulder injury — and with centreman Tyler Bozak out with what Babcock called an infected cut in his hand — the Leafs played well, but failed to strike the death blow to a teetering team.

Not that the Leafs made zillions of mistakes. But the ones they did make — a short-handed neutral-zone turnover by Zach Hyman on a Pacioretty goal, some fire-drill defensive-zone coverage on the Alex Galchenyuk goal that made it 2-1 — were promptly exploited.

Matthews, mind you, did all he could to swing it the home team’s way. He threw a game-high seven shots at Price. And if his goals weren’t pretty, they were testaments to perseverance. Matthews’ first goal was a throw-it-at-the-net prayer that floated and bounced before somehow tunnelling through Price’s five-hole. His second goal was a net-front tip-in off a Hyman feed that somehow leapfrogged over Price’s right pad en route to the mesh.

Time and again on Saturday, he turned what looked like nothing into something, before Price’s knob turned two points into one for Toronto. Montreal got the game. But the Leafs, yet again, could celebrate the knowledge they’re in possession of a big-game performer of their own.

“He’s going to be our No. 1 centre, if he’s not already, in no time,” Babcock said of Matthews. “And he’ll be the guy who’s driving our franchise. I think that’s important. He’s got a work ethic and a mental toughness that is going to be a great example for everyone that becomes a Leaf.”