Famagusta 14°
few clouds
BUSINESS EDUCATION ENTERTAINMENT HEALTH POLITICS SCIENCE SPORTS TECHNOLOGY
10:22 Four Benefits of Hiring a Dedicated Development Team
04:48 Mark Kelly, President of Safety Marking Inc., Discusses Structuring Effective...
17:58 Trump wants to play golf at the Biden swearing-in in Scotland - but is...
17:54 First doubts Regarding tightened Steps: two National Countries Extract...
10:39 Covid-19 : in France, the end of containment and entry into force of the...
04:34 The schools of Rome will use the Internet with light bulbs: what it is...
10:58 Kratom Tea: How Is It?
11:46 Office Furniture Products for you!
12:17 Top Clubs, Their Value, Revenue And Current Standings
11:14 Reasons Why Rewarding Yourself is a Good Practice
BIST
1535
GOLD
440.705
USD
7.3988
GPB
10.0957
EUR
9.0139
Breaking News
Which Cake Flavours Do Americans Like Most?
Close

LOS ANGELES – NHL commissioner Gary Bettman announced Saturday that the 10-game suspension given to Ducks forward Antoine Vermette for striking an official with his stick will be upheld.Bettman heard Vermette’s appeal for a ban reduction in New... 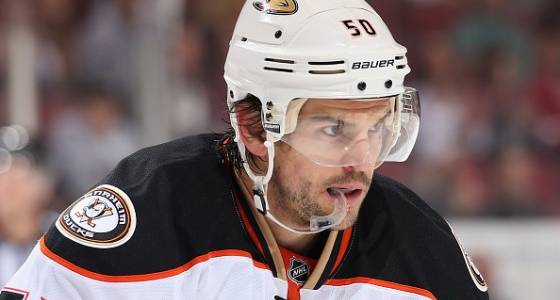 LOS ANGELES – NHL commissioner Gary Bettman announced Saturday that the 10-game suspension given to Ducks forward Antoine Vermette for striking an official with his stick will be upheld.

Bettman heard Vermette’s appeal for a ban reduction in New York City on Thursday and sided with linesman Shandor Alphonso’s contention that Vermette slashed him after dropping the puck on a faceoff during the third period of a Feb. 14 game at Minnesota.

The NHLPA contended that what Vermette did was a “tap” and argued that it should have been considered a less-serious Category III offense that calls for a three-game suspension. Bettman maintained that it fit under Category II, a physical abuse of official foul without intent to injure.

Vermette served the fifth game of his suspension Saturday when the Ducks took on the Kings at Staples Center. He will not be eligible to return until March 12 against Washington and will have to forfeit $97.222.22 of his salary to the Players’ Emergency Assistance Fund.

The 34-year-old forward has eight goals and 14 assists in his first season with the Ducks. The league noted in its written decision that Vermette’s stick-swinging violation was just the second major penalty in his lengthy career.

In his statement, Bettman determined that Vermette “exhibited sincere remorse both at the hearing and in his prior apology delivered to Mr. Alphonso.” But the commissioner also noted that the forward “learned at an early age” that a player cannot strike an official under any circumstances.

“While in a particular case, and one such as this, the ten (10) game penalty may seem harsh, the purpose of Rule 40 is to protect the Officials and ensure the integrity of the game,” Bettman wrote. “Therefore, any inappropriate conduct by Players vis-à-vis Officials cannot be condoned or tolerated.”

Wideman had his 20-game suspension reduced to 10 after an independent arbitrator ruled that the Calgary Flames defenseman was in a concussed state and did not intend to injure Henderson. He had already sat for 19 games but was refunded money lost over the final nine games.

And having strongly disagreed with James Oldman’s ruling in the Wideman incident, NHL officials are sending out a signal in this Vermette case that they do not want the appearance that abusing one of their own – whether done with severity or not – would be taken lightly.

The players’ union cited three past suspensions that were reduced to a Category III offense, which typically carries a three-game penalty. One of its arguments was that Vermette’s act was similar to what Columbus’s Michael Peca did in 2008 when his 10-game ban was reduced to five upon determination that Peca grabbed referee Greg Kimmerly’s arm to get his attention.

Disappointed with Bettman’s final ruling, the NHLPA is considering whether to take this to an arbitrator. It has seven days to decide on that and, in a statement released by Vermette on Saturday, it appears that course could be taken.

"First and foremost, I have great respect for the officials and the integrity of the game,” Vermette said. “Also, I agree that I deserve a suspension. I should never make contact with an official. At the earliest possible opportunity, I apologized to Mr. Shandor Alphonso. I was trying to get his attention and was not trying to hurt him. However, using my stick was a mistake, and I accept full responsibility for my actions.

“I certainly hope my track record in the NHL will earn me the benefit of the doubt regarding this incident. I feel a 10-game suspension is excessive and will be reviewing my options. I look forward to returning to the lineup as soon as possible."

It is the second season in a row that a Ducks player has incurred a significant suspension. Shawn Horcoff received a 20-game ban last year for failing a test for the usage of a banned substance. Horcoff is now retired.