Jimmie Johnson captured his record-tying seventh NASCAR Cup championship last season. A storyline for 2017 is obvious: the pressure to win an eighth – thus separating him from icons Dale Earnhardt and Richard Petty – is ramping up on Johnson as the season... 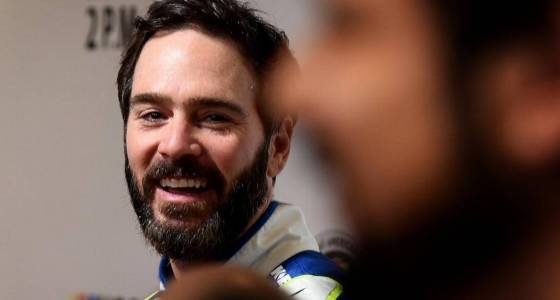 Jimmie Johnson captured his record-tying seventh NASCAR Cup championship last season. A storyline for 2017 is obvious: the pressure to win an eighth – thus separating him from icons Dale Earnhardt and Richard Petty – is ramping up on Johnson as the season gets underway with Sunday’s Daytona 500 at Daytona International Speedway.

“I’m really content with where I’m at, so I guess (there is) less pressure,” Johnson said, his California cool coming through. “Truthfully, I’ve felt like there hasn’t been a lot of pressure on me through (championships) six and seven because I never even thought I’d have one to start with, you know?”

Should Johnson win another title – and at 41 he is showing no signs of slowing down – another storyline will emerge:

Is he the greatest driver ever?

“I love sports and I love the debate about who’s the best in every sport,” said AJ Allmendinger, one of the drivers against whom Johnson races every week. “Is Tom Brady the best (quarterback) ever? It’s such a fun debate, but we’re in such different eras. The era you live in is what you think is the best. But you can’t go back.”

Allmendinger remembers watching Johnson performing celebratory “doughnuts” in his No. 48 Chevy after winning title No. 7 at Homestead-Miami Speedway last November.

“We’re in the presence of real history here,” Allmendinger thought. “Some day I’m going to be able to say I raced against Jimmie Johnson.”

Jamie McMurray, who won the Daytona 500 in 2010, was thinking the same thing.

Jimmie Johnson has won a record-tying seven NASCAR Cup titles, joining Dale Earnhardt and Richard Petty at the top of the list.

“Maybe it seems a bigger deal to me because I am living it with him and racing with him every weekend,” McMurray said. “But it’s maybe somewhat like the golfers who are with Tiger Woods and watched him as they competed against him.

“I never raced against Dale Sr. or Richard Petty or any of those guys and I wasn’t around for those times. But I have been for Jimmie’s. And for one guy to do what he has done is unbelievable.”

“My suit is a little tight for some reason,” Johnson said. “I know I need to get on that bike and start running off some fat.”

Johnson is 5-foot-11 and tries to stay between a trim 170-180 pounds. He’s as active off the race track as he is on it – and therein lies a major way in how he will cope with the pressures coming with his quest to win his eighth title.

Maybe it’s somewhat like the golfers who are with Tiger Woods and watched him as they competed against him. Jamie McMurray

Johnson can often be seen jogging in and around the track during race weekends. He’s an avid cyclist and skier. He and his family are spending the winter at Aspen, Colo., and will return to their home in Charlotte in the spring. The temporary move also will allow Johnson to spend more time with his wife, Chandra, and their two daughters when the Cup circuit heads West for three weeks in March.

“I grew up outdoors quite a bit,” Johnson said of his upbringing in El Cajon, Calif., where he went dirt racing in the nearby desert. “The experiences we’ve had together, the quality time we’ve had together, we’re trying to charge that battery as much as we can because the season is so demanding, takes a toll on us. That’s really the reason we’re there is just to spend more time together as a family, and the outdoors provides a great backdrop for that.”

/ #48 running laps inside and outside the track today in Daytona / #chasing8 -@LyleOwerko pic.twitter.com/7USsBI6Err

The NASCAR season is a long slog. So much happens over the course of 36 races that attention to Johnson’s chase for No. 8 probably won’t really come into focus until the playoffs begin in September.

24 Johnson’s starting position in the Daytona 500

That’s what happened in 2016. It had been three years since Johnson had won his sixth, a relatively long drought after having his first five come in successive seasons from 2006-10.

“I think Jimmie’s in the prime of his career,” said Rick Hendrick, for whom Johnson has driven his entire 17-year Cup career. “The way he goes after things and works out. He’s been in the tough situations, in the tough moments.

“I think getting to (championship) seven was the challenge. If you could get to seven, then you’ve tied it. It’s hard to explain. I think we took some of the pressure off just getting to seven because now he can just race.