Contenders that will regret not upgrading their weakest positions

The great Harry Caray once said that it's the fans who need spring training. Wake us from our winter slumbers with the reminder that baseball is around the corner.Games are already under way in Arizona and Florida, so something to look at during this longer-than-usual... 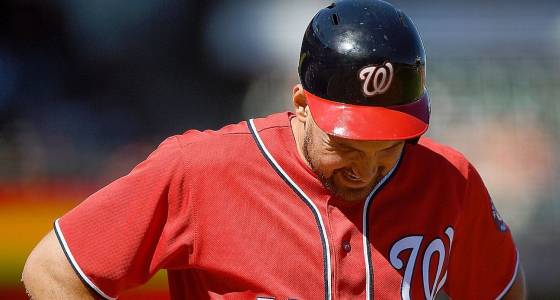 The great Harry Caray once said that it's the fans who need spring training. Wake us from our winter slumbers with the reminder that baseball is around the corner.

Games are already under way in Arizona and Florida, so something to look at during this longer-than-usual spring training is what happens at some key positions. With help from our friends at FanGraphs, I've selected 10 potential weak spots on eight playoff contenders.

Tigers in CF since 2007 (16.1 wins above average): The Tigers had excellent production from Curtis Granderson and a solid player in Austin Jackson. They traded Jackson at the right time but have struggled to fill center field the past two years. Cameron Maybin was OK at the plate in 2016 but below average defensively, and was traded to the Angels in a salary dump.

The recent death of owner Mike Ilitch brought forth many heartfelt eulogies for the man who bought the Tigers in 1992 for $82 million and always told the press he wanted nothing more than to win a World Series title. As the estimated value of the franchise soared past $1 billion, however, the Tigers always seemed unwilling to spend that little bit extra -- another reliever, a good backup outfielder -- that may have put the team over the top.

That trend continues in 2017 as the Tigers enter with no good options in center field. Mahtook and Collins probably end up in a platoon, but both are stretched defensively and neither has hit much in limited big league trials. It's hard to believe a team that fancies itself a playoff contender could enter the season so unsettled in center field.

Nationals at 1B since 2007 (minus-10.7 WAA): This has long been a problem area for the Nationals. Adam LaRoche had a big season in 2012, but they've been worse than average in seven of 10 seasons, including last year, when Zimmerman struggled.

Zimmerman missed time with an oblique injury and then a wrist injury after getting hit by a pitch. His batted-ball metrics suggest he did hit into bad luck, so there's some chance of a bounce-back here. Lind, who had a terrible 2016 with the Mariners (.286 OBP) was just signed as a left-handed option, so at least the Nationals are admitting they're not 100 percent locked in with Zimmerman. Still, in a market flooded with first-base options, the Nationals -- with an owner whose net worth is estimated at $5.7 billion -- refused to upgrade, primarily because Zimmerman is signed through 2019. If they fall short again, it's possible first base will be a reason why.

Mariners at 1B since 2007 (minus-19.2 WAA): Yuck. This has been the second-worst position in the majors over the past 10 seasons, behind only first base for the Marlins. And a Valencia/Vogelbach platoon is hardly one to inspire confidence.

FanGraphs projects Valencia to hit .261/.314/.426 and he has hit .288/.346/.477 the past two seasons, so maybe he outperforms that projection, especially with the way the ball was flying out of Safeco last season. Vogelbach projects as a potentially solid OBP guy, but his defense and baserunning are off-the-charts bad. Pedro Alvarez is still a free agent, and while he's not exactly Keith Hernandez at first base, his offense would be more of a sure thing than gambling on Vogelbach. Again, for a team with an aging core in win-now mode, the unwillingness to pay a little more may bite them in the end.

Diamondbacks at 2B/SS since 2007 (6.7 WAA at 2B, 1.3 at SS): The D-backs received All-Star-level production from Jean Segura at second base last year but flipped him to the Mariners in exchange for Taijuan Walker and Marte, who struggled both at the plate and in the field in his first full season.

Positions of strength: Where MLB teams have shined the most the past decade

Help Wanted! These problem positions of plagued teams for a decade

The Diamondbacks aren't hurting for options, but are any of them good ones? They appear to be betting on Drury handling second base, but I'm not sold on his upside being anything more than average at the plate. He was primarily a third baseman in the minors, so he's being pushed to the higher end of the defensive spectrum, and he projects as below average on defense. That puts more pressure on his bat, where there is potential if he learns to walk a bit more and tap into his power. The projection, however, sees regression from his .282/.329/.458 rookie line.

You know what you're getting with Ahmed: He's a plus defender (32 defensive runs saved the past two seasons combined) who can't hit at all. The previous regime seemed to believe in Owings, but he owns a .294 career OBP after 1,400 plate appearances, so he can't hit, either. Marte was just 22 last season and has the athleticism to improve, but he has no power and his walk rate regressed after a better showing in 2015. I don't have a good solution here, and considering their catchers ranked 29th in projected WAR, the Diamondbacks will need their middle infielders to exceed expectations, even with healthy returns from A.J. Pollock and David Peralta.

Red Sox at 3B since 2007 (3.5 WAA): The Mike Lowell era ended in 2009 and Adrian Beltre had a monster 2010 before departing for Texas, but the Red Sox have struggled to fill the position since. Will Middlebrooks wasn't the answer and Sandoval was a disaster in 2015 after signing a five-year contract.

Sandoval will get another opportunity this year after missing most of last year, and utilityman Holt is now the backup after Travis Shaw was traded to Milwaukee. The long-term solution is Rafael Devers, one of the top prospects the Red Sox have kept, but he's a couple of years away. Keep an eye on Hernandez, who profiles as more of a middle infielder but could be a solid emergency replacement if Sandoval and Holt struggle. My prediction: Sandoval ends up getting DH time (with Hanley Ramirez playing some first base), so I think we'll see a lot of Holt or Hernandez here. Sandoval still won't justify his contract, but it probably won't cost the Red Sox the AL East title.

Royals at 2B since 2007 (minus-8.4 WAA): The last time the Royals rated above average at second base was 2008, the last year of Mark Grudzielanek's three-year tenure. Outside of his solid play, however, the Royals have struggled to find a second baseman since Frank White retired in 1990. What, you've already forgotten Chris Getz? Ruben Gotay? Carlos Febles? Terry Shumpert?

This crew is unlikely to end the run of subpar seasons. Merrifield had some moments as a 27-year-old rookie, but his final line was a meager .716 OPS. Mondesi has been a highly rated prospect, and while he's still just 21 and has been rushed through the minors, there are no signs he can hit at the major league level. Colon was the fourth overall pick in 2010, and while he'll forever live on in Royals lore for his go-ahead hit in the clinching game of the 2015 World Series, he's a backup at best. The Royals need more offense in 2017, but they need it to come from the proven veterans since they won't be getting much at second base.

Braves in LF/RF since 2007 (minus-8.0 WAA in LF, 8.9 WAA in RF): The Braves were very good in right field with Jason Heyward for five seasons, and they always had solid production in right during their playoff years -- David Justice, Brian Jordan, Gary Sheffield, J.D. Drew. Left field has been a different story, as the last guy to serve as the regular for more than two seasons in a row was Ryan Klesko in 1998.

This one is interesting since Kemp is coming off a 35-homer, 108-RBI season. Home runs and RBIs are good! Buster Olney even rated Kemp the fifth-best left fielder heading into 2017, and Markakis is coming off a 1.7-WAR season. Considering the Braves also ranked last in projected WAR at third base with Adonis Garcia and seem to view themselves as playoff contenders, they better hope those No. 29 rankings are way off.

So what's up? FanGraphs projects Kemp at .266/.315/.455 with poor defensive metrics -- no surprise there since his defense has clearly been terrible in recent seasons. The Braves are counting on the revitalized Kemp, who hit .280/.336/.519 in 56 games after coming over from the Padres. He also reported to camp much lighter -- maybe even in the best shape of his life! -- as much as 30 pounds lighter, according to one report. Whether that will help his range remains to be seen, as his bad knees may simply limit his ability to move out there.

Markakis is projected to hit .271/.346/.380 with defense and baserunning a few runs below average. That doesn't seem too awful, but the major league average for right fielders in 2016 was .259/.329/.434, so Markakis doesn't bring much power to a power position and doesn't have the other skills to rank higher.

It's worth noting that other projection systems are a little more optimistic. Baseball Prospectus' PECOTA has Kemp at 1.9 WAR and Markakis at 0.8. Bottom line: Defense, baserunning and OBP matter.

Cubs in CF since 2007 (0.6 WAA): The Cubs have struggled to fill center field since ... well, really, since Rick Monday in the mid-'70s. Brian McRae had a couple of good seasons in the '90s, but only Corey Patterson has lasted more than three seasons as the starter. In 2016, Dexter Fowler had the best WAR by a Cubs center fielder since Monday in 1976 ... and now he's with the Cardinals.

How does this play out? Even Joe Maddon doesn't know. The Cubs would love for Almora to hit enough to run out there on a regular basis with his defense, but he doesn't even project to be peak Jon Jay -- FanGraphs has him hitting .269/.296/.398. Jay has lost a step from his Cardinals days and has six home runs in 970 at-bats the past three seasons, so he's really a fourth outfielder at this point. That could leave Heyward getting time here with Ben Zobrist in right field.

If the Cubs are to fall back this year -- I'm not betting on it -- the most likely reason is injuries to the starting rotation. But the outfield could potentially become an issue, especially if Heyward doesn't bounce back at the plate, Kyle Schwarber is a disaster on defense and center field ends up being a revolving door of mediocrity.

FanGraphs projects (based on projected WAR and playing time) the weakest teams at every position: