Bruins are rising above the Madding crowd

Bruins can walk into the home of a fourth-ranked Arizona team that had already whipped them once, blow an early lead, fall behind until nearly the middle of the second half, and recover to walk out with a bruising 77-72 victory, what next?Two weeks before... 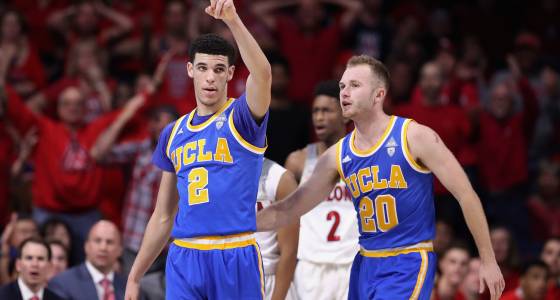 Bruins can walk into the home of a fourth-ranked Arizona team that had already whipped them once, blow an early lead, fall behind until nearly the middle of the second half, and recover to walk out with a bruising 77-72 victory, what next?

Two weeks before the unveiling of this year’s March Madness brackets, these Bruins showed that it would not be unwise to pencil them into your Final Four.

Twenty-two years after UCLA’s last national basketball championship, these Bruins have resoundingly offered enough evidence for their fans to begin seriously dreaming about another one.

Standing completely unruffled in a loud and sweaty McKale Center hallway Saturday after his team had handed the Wildcats only their second loss there in the last 69 games — that is not a misprint — Bruins Coach Steve Alford was asked if his team was finally ready for March.

Hmm, what was it that finally convinced him? Was it the way the Bruins outhustled, outfought and outscored Arizona by 11 points in the final 16:04 amid a constant overwhelming roar? Was it their amazing 9-1 offensive rebounding edge in the second half? Or their 20-4 overall advantage in the scrapping stat of second-chance points?

Or maybe it was just, after years of entering the NCAA tournament saddled with the West Coast’s reputation of being soft, UCLA may finally be entering the madness stamped by their toughness.

They are 7-0 in February after losing their last two games in January, which means something, because the last time they were undefeated in this month, they won that 1995 national title.

They are not only 26-3, but they have now avenged all three losses, which means something, because they have beaten every team on their schedule.

The free throw dropped through the net and Bryce Alford pounded his chest with his hand, UCLA’s lead having grown to an insurmountable four points with only 1.2 seconds left.

It was all about heart for the Bruins on Saturday night.

The heart to continue the defensive improvement that has carried...

The free throw dropped through the net and Bryce Alford pounded his chest with his hand, UCLA’s lead having grown to an insurmountable four points with only 1.2 seconds left.

It was all about heart for the Bruins on Saturday night.

The heart to continue the defensive improvement that has carried...

What also doesn’t happen very often is Arizona crumbling at home, but that is what the Bruins do to people, and that’s what they did Saturday.

Lonzo Ball toyed with the Wildcats, Thomas Welsh punished them, Bryce Alford and Aaron Holiday splashed them, and a swarming team defense crushed them.

Oh yeah, about that defense. It turns out, the Bruins were reading and listening to all of criticism earlier this season. It even raised a little chip on some of their young shoulders. In the last seven games, they have answered it by winning games not by being the highest-scoring team in the land, but by crouching and crunching and stopping the other guys.

Said Bryce Alford: “People have been killing us on our defense all year. Any time you’re killed on an area, you’re working on it. This is a hungry team.”

It was that hungry defense that created the moment that inexorably changed Saturday’s game. It happened with 10:44 remaining, after the Bruins — who led by seven points in the first half — had just regained a one-point lead.

With everyone standing and screaming, UCLA’s zone defense confused Arizona until the final seconds of the shot clock, at which point Kadeem Allen simply walked with the ball, giving it back to the Bruins.

Less than minute later, Holiday nailed a three-pointer. Moments later, Alford nailed another three-pointer to give UCLA a seven-point lead that never really felt threatened until Arizona had the ball trailing by three points in the final seconds.

At which point the game essentially, and fittingly, ended with Allen throwing up a three-point attempt that missed everything.

No, nobody in McKale Center dared sing, “Air-ball, air-ball.” In fact, nobody said anything.

“To have a seven-point lead in the first half and feel like we’re playing well . . . then to have them come back and get a lead at halftime, a lot of teams in this building would turn the other way and they could get blown out,” Bryce Alford said. “Tonight shows a lot about how tough we are, and how smart we are.”

Alford showed his toughness by grabbing six rebounds, and afterward TJ Leaf thought he would show his smarts by putting Alford in his place.

“I think Bryce had maybe his career high out of his whole life in rebounds today,” Leaf said with a grin.

Let that be a warning to the rest of the college basketball world as the Bruins go under the micrscope with tournament time approaching. Don’t shortchange them. They are marching into March.