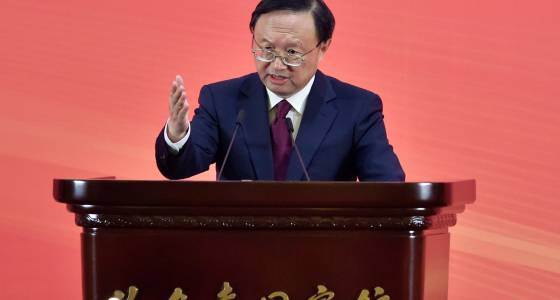 Yang, who is Chinese President Xi Jinping's top foreign policy adviser and a familiar face in Washington, has previously served as China's foreign minister and an ambassador to the U.S.

The visit comes amid growing uncertainties over bilateral trade ties and rising security tensions in East Asia. Trump has criticized China's activities in the South China Sea, where it has built several artificial islands housing military structures. The U.S. president also attacked China over North Korea in his interview with Reuters last week, saying that it was not exerting enough pressure to stop the reclusive nation from threatening the world with nuclear weapons.

The visit is taking place days after a telephonic conversation between Yang and U.S. Secretary of State Rex Tillerson, during which the two endorsed a healthy U.S-China relationship.

"Yang will have an extensive range of topics to discuss with the U.S. officials but the foremost would be to reaffirm the tone of bilateral relations set by the two heads of state in their phone conversation," Jia Xiudong, a research fellow with the China Institute of International Studies, said, according to Xinhua.

There are reports that to keep a check on U.S. dominance of the high seas, the Chinese navy will likely secure new funding in the country's upcoming defense budget. The Chinese navy has been rolling up its sleeves in recent months, with its first aircraft carrier sailing around self-ruled Taiwan, according Reuters. Few days back, there were reports that three Chinese warships sailed within Japan’s territorial waters some 12 nautical miles off the islands in East China Sea, roughly 140 miles northeast of Taiwan.

“It’s opportunity in crisis,” a Beijing-based Asian diplomat, whose name was not revealed, told Reuters. “China fears Trump will turn on them eventually as he’s so unpredictable and it’s getting ready."

Apart from bilateral ties, finalizing dates for a meeting between Xi and Trump will also be a part of the agenda when Yang meets with U.S. officials, Jia told Xinhua. Other possible areas of discussion are the nuclear threat in the Korean Peninsula, climate change, energy and the Syrian conflict.