Vehicle stickers tend to be fairly non-controversial and innocuous, but the new windshield decal that will be going on sale in Orland Park in a few months has prompted a debate among some residents.It features a black and white American flag with a blue stripe... 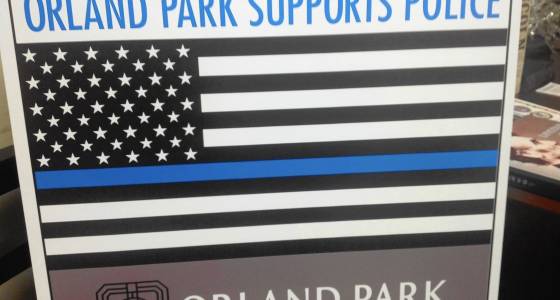 Vehicle stickers tend to be fairly non-controversial and innocuous, but the new windshield decal that will be going on sale in Orland Park in a few months has prompted a debate among some residents.

It features a black and white American flag with a blue stripe running horizontally just below the field of stars, and the words "Orland Park Supports Police" at the top. Often referred to as the "thin blue line" flag, it has more recently been associated with the Blue Lives Matter pro-police movement formed in late 2014.

Most of the comments posted on the village's Facebook page are supportive and congratulate the village on the design, while some question whether the village, via the decals, is compelling vehicle owners to subscribe to a message they don't fully agree with and that Orland Park should offer them an alternative sticker.

The stickers are on vehicles for two years, and the new sticker will go on sale after Memorial Day.

The village's current sticker denotes Orland Park's involvement as a commemorative partner in the Department of Defense's observance of the 50th anniversary of the Vietnam War, while the 2013-15 sticker recognized the village's Lions Club on its 50th anniversary.

In unveiling the new sticker, Orland Park Mayor Dan McLaughlin said a number of village residents had requested Orland Park do something to support law enforcement.

"We want our local police and law enforcement across the country to know that Orland Park supports them," the mayor said in a news release about the sticker. "Police officers on all levels have had a hard time these past few years and it's time for people to thank them for their service."

Reactions such as "awesome," "excellent" and "way to go, Orland Park" represented the tone of many commenters at the village's Facebook page, although one resident said it is "wrong and I deeply resent being forced by a civil authority to 'take a side' in such a hot button issue," and that the village needed to offer "an alternative for those who have concerns."

Others said they feared having their windshield shattered and one woman said the sticker design was akin to the village thumbing its nose at the Black Lives Matter movement and "demonstrating once again that there is a clear hierarchy and that Black people are ... less important." Those who expressed concerns about the sticker noted their dissent wasn't because they did not support law enforcement.

One man cited the Supreme Court decision in Wooley v. Maynard, and paraphrased the court's ruling that "government cannot force individuals to act as mobile billboards for its ideological message."

In that New Hampshire case, a Jehovah's Witness, George Maynard, objected to the display of the state's motto, "Live Free or Die," on the state's license plate. The motto was contrary to his religious and political beliefs and Maynard cut the "or Die" section from his plate, and he was convicted of violating state law, fined and even given a jail sentence, according to a synopsis of the case from the IIT Chicago-Kent College of Law's website.

The court's 1977 ruling found that the state's law regarding the display of the plates effectively required individuals to "use their private property as a 'mobile billboard' for the State's ideological message." It also found that "where the State's interest is to disseminate an ideology, no matter how acceptable to some, such interest cannot outweigh an individual's First Amendment right to avoid becoming the courier for such message."

Officials with the Citizen Advocacy Center and the Illinois chapter of the American Civil Liberties Union said Orland Park's vehicle sticker has parallels to the Wooley v. Maynard decision.

"It's terrific that they (the village) want to honor law enforcement, but can they choose a different symbol that's not so divisive?" or offer an alternative sticker to drivers, she said.

Because not displaying the vehicle sticker puts a driver at risk of being ticketed, Orland Park should offer residents an alternative to ease any concerns, suggested Ed Yohnka, director of communications and public policy for the ACLU of Illinois.

"There are workarounds to this," he said.

He said the sticker issue mirrors the First Amendment rights of residents taken up in the Supreme Court decision, and there is "a penalty that attaches (in the form of a ticket and fine) for not engaging in the speech" being promoted.

Any debate over the vehicle sticker comes at a time when "we're in a very important discussion in our country about just what kind of policing we want" and "how we want them to behave in our communities," he said. What has happened is that people are being forced to take sides, and "either you support the police or you support Black Lives Matter."

Noting he has "an enormous amount of respect for the police and what they do," Yohnka points out that Black Lives Matter is calling for law enforcement reforms.

"It's about scrutiny, it's about reform, making sure it works right across the board and in every community," he said.

The village's vehicle sticker grew out of requests from residents about how the village could recognize the work of Orland Park police, with many residents suggesting the village distribute blue lights to residents for the front of their homes or possibly blue ribbons for front yard trees, according to Joe La Margo, assistant village manager. Although the Village Board would not typically vote on a design for the vehicle sticker, it was not clear what the vetting process for the new decal might have been, or whether other designs along the same theme were considered.