Speculation has again stepped up that Mexico international striker Javier “Chicharito” Hernández is being eyed for a move to the United States and Major League Soccer. Negotiations have already begun between MLS and his current club over a potential... 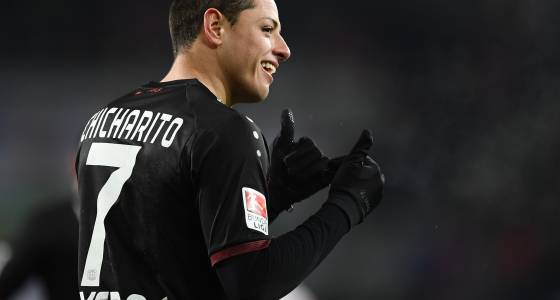 Speculation has again stepped up that Mexico international striker Javier “Chicharito” Hernández is being eyed for a move to the United States and Major League Soccer. Negotiations have already begun between MLS and his current club over a potential transfer, according to a recent report from ESPN.

But there remains no word on whether the 28-year-old would be willing to trade in playing regularly in one of Europe’s top leagues for MLS, which remains still very much in the process of establishing itself as a high-level competition. Hernández, Mexico’s second-highest goalscorer in history, has previously shunned opportunities to move to MLS, notably when leaving Manchester United to move to Leverkusen in Germany’s Bundesliga in the summer of 2015.

Were he to make the move, he would be a huge name in a smaller pond. And he would be rewarded handily for that star power. He could command a salary of upwards of $9 million, making him MLS’ highest-paid player, one source told ESPN.

His bargaining power would be increased further were he to want to move on a free transfer in the summer of 2018, when his contract with Leverkusen is due to expire. But even then, when he will be turning 30, there is reason to suggest that Hernández will want to remain in Europe, where he has played since leaving Chivas for Manchester United following the 2010 World Cup.

Just last month, Hernández suggested that, while MLS is an attractive proposition, any move to the U.S. remains some way off.

“MLS is something that’s more attractive to me [than China],” he told Yahoo. “If I want to retire in MLS, or China, or Dubai, or Australia, or my hometown team, these are all possibilities! In four or five years’ time, you never know what kind of situation I’ll be in as a footballer and a person.”

Javier Hernández of Leverkusen celebrates scoring the third goal during the Bundesliga match between FC Augsburg and Bayer Leverkusen at WWK Arena on Feb. 17, 2017 in Augsburg, Germany. Photo: Getty Images

Hernández has not enjoyed as prolific a second season at Leverkusen as he did first and went through a lengthy drought in front of goal. However, he recently returned to goal-scoring form and is again in double figures for goals in the Bundesliga.

One concern for Hernández, who also spent a year on loan with Real Madrid two seasons ago, is that Leverkusen will likely miss out on a place in next season’s Champions League. That could lead him to seek a transfer to a club operating in the world’s most prestigious competition. A move to the Premier League and Tottenham has previously been suggested.