Kicked bloody: Got the skate in the face

Some of the sport's worst damage happens when the ice hockey players ' skates for a rare once, hitting the opponents faces. on Wednesday, it happened again, 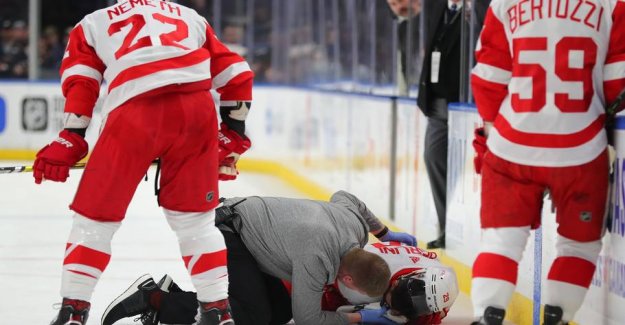 Some of the sport's worst damage happens when the ice hockey players ' skates for a rare once, hitting the opponents faces.

on Wednesday, it happened again, as the Detroit Red Wings were the visiting Buffalo Sabres.

At the end of the first period was the engelskfødte forward Brendan Perlini and rummaged around on the ice, and as the Finnish back Henri Jokiharjus also lost balance, he fell and kicked the leg from behind and in the head on the recumbent Detroit-play.

- We saw it in slow motion. It was very scary, " says teammate Anthony Mantha of the Detroit Free Press.

UPDATE: Brendan Perlini suffered a deep laceration to his nose. He is currently receiving stitches from team doctors in Buffalo. His return to tonight's game is questionable. #DETvsBUF

Other images show how the Perlini kept out of the court with a towel for the face.

- He was lucky, because we were all scared when we saw that he was hit so close to the eye, says coach Jeff Blashill.

Detroit lost the match 2-3, but on Wednesday evening the club put a photo up of the finished play, with the text 'all is well'.

See also: Furious over the brutal attack: 'It was an assassination attempt'

See also: Squalid udebaneture: 'All lay naked in the bus'

the 23-year-old Perlini was born in England, and only at the age of 11 he moved to Canada. On his Instagram profile, he does so aware of his great joy of football, and he has pictures where he stands with both Didier Drogba and Manchester United legends.

In 2014, he was awarded the to the NHL, and Arizona Coyotes, where he played forward to the 18/19 season, where he switched to the Chicago Blackhawks. In October 2019, the smoke he saw on to Detroit.

Great night at the @phxrisingfc game the other night. Unreal to meet the legend @didierdrogba mans a baller

A spread shared by Brendan Perlini (@bubzp11) the

Thanks so much to @manchesterunited for having me yesterday!! Sick to be down by the pitch and chatting with some of the lads and some legends like #7 Bryan Robson too!! Hatred, so much fun. Disappointed the gaffer didn't sub me in tho... #iwasready #United #Giggsy