The Orioles suffered their first freak injury of spring training Saturday when outfielder Michael Bourn was diagnosed with a broken right ring finger suffered while catching a football after Friday’s workout in Sarasota.Bourn is expected to miss four... 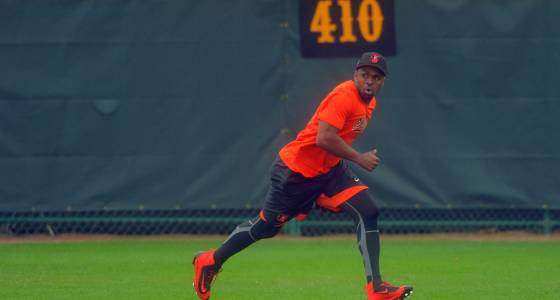 The Orioles suffered their first freak injury of spring training Saturday when outfielder Michael Bourn was diagnosed with a broken right ring finger suffered while catching a football after Friday’s workout in Sarasota.

The Orioles signed the 34-year-old Bourn to a minor league deal Monday. He would make $2 million if he makes the major league roster. The deal also included a March 27 opt-out clause, which would seem to be impacted by the injury.

Players commonly throw a football around in their spare time – it’s seen as an non-baseball activity that builds shoulder strength – but the risk for injury always exists.

Additionally, starting catcher Welington Castillo was scheduled to make his first spring start Saturday afternoon on the road in Bradenton against the Pittsburgh Pirates. But he was scratched with neck spasms, an injury he felt when he woke up Saturday morning.

Showalter said Castillo will be re-evaluated Sunday, but is considered day-to-day.

Also, outfielder Chris Dickerson fouled a ball off his shin, but was still expected to be able to play in Saturday's game.

This story will be updated.