It was supposed to be a routine morning shower. But in the Multnomah County Detention Center, with its volatile mix of mentally ill inmates and under-trained guards, even the mundane can go quickly and brutally wrong. On this day, a 55-year-old inmate with... 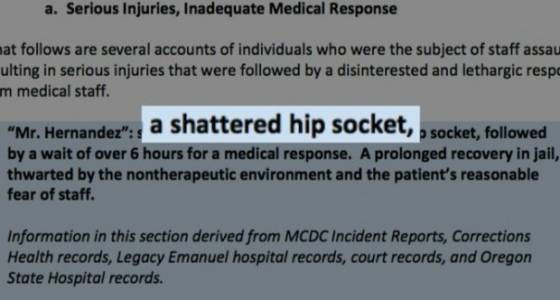 It was supposed to be a routine morning shower. But in the Multnomah County Detention Center, with its volatile mix of mentally ill inmates and under-trained guards, even the mundane can go quickly and brutally wrong.

On this day, a 55-year-old inmate with schizophrenia allegedly charged at the deputy who was accompanying him to the showers. The deputy tasered the man twice, causing him to fall to the floor. Rather than wait for backup, the deputy then straddled the inmate and pounded his face repeatedly with his fists.

On the way to the emergency room, jail staff wrapped a blanket around the inmate's bloodied face "to reduce the impact at the hospital on civilians," according to a jail incident report. Doctors later identified eight facial fractures, including some that had shattered into multiple fragments, a trauma normally associated with high-speed car crashes, according to hospital records.

The Multnomah County Sheriff's Office later commended the deputy for his appropriate use of force.

The incident is one of a series cited in a chilling new report from Disability Rights Oregon about the conditions in the county jail for the mentally ill. An estimated 400 to 800 of the 1,000 inmates being held in a Multnomah County jail have some form of psychiatric disorder. The most serious cases are housed at the Multnomah County Detention Center, which takes up seven floors of the Justice Center Building in downtown Portland.

With medical and mental health care "woefully inadequate," according to report author Sarah Radcliffe, the jail turns to correctional tools: "Rampant use of solitary confinement, punitive use of restraints and suicide watch, and routinized force against people with mental illness."

It's long been acknowledged that jails have become dumping grounds for those with psychiatric issues. But the new report offers an unflinching look at what that de facto social policy means behind jailhouse walls.

"The people who work there are for the most part good people trying to do the best they can," Dr. Wil Berry, a psychiatrist who did a six-month rotation at the Multnomah County Detention Center, told Radcliffe. "However, the product of the system as a whole is that we're torturing very sick people. I hate myself for being part of it."

The sheriff's office, which runs the county jails, did not dispute anything in the report. Sheriff Mike Reece said he's launched a review of jail policies and called for the entire county to work together to "prevent the criminalization of mental illness."

Researchers used pseudonyms when describing the following incidents, which took place within the last two years.

The eastern European immigrant was taken to OHSU Hospital in Portland after jumping off a bridge in a failed suicide attempt. Medical staff found him uncooperative and, after four days, Mr. Novak was arrested and charged with trespassing.

Novak spent the next 14 months in the county jail, often refusing to eat and losing a lot of weight. He was usually too scared to leave his cell and routinely turned to knocking his head against the wall. At one point, he pulled out a tooth.

As far as Radcliffe could determine, the county made little effort to treat Novak's mental illness. After more than a year in jail, he pleaded guilty to a parole violation and the county transferred him to federal immigration authorities, who intend to deport him.

Mr. Hernandez, who was known to suffer from mental illness and had spent time at the Oregon State Hospital, was lodged at the county jail in the summer of 2015 on misdemeanor charges.

One day, a guard tackled Hernandez for allegedly threatening deputies with a food tray. Hernandez could not walk afterward.

More than six hours later, Hernandez was taken to the emergency room. He was diagnosed with a shattered hip socket and a dislocated hip. After three days, he was sent back to jail. Guards claimed he often refused treatment for his hip. Other times, nurses weren't allowed into his cell because he was being disciplined or deemed too dangerous due to his mental condition.

Hernandez was finally transferred to Oregon State Hospital, where he got regular physical therapy and time out of his cell. But he was still dependent on a wheelchair three months later when he was sent back to the county detention center. The county is trying to recover $2,000 from him for his medical treatment.

Tragedy is in abundant supply in the psych ward of the county jail, even in cases that don't involve overt violence.

Ms. Mckenzie, a 20-something skateboarder, had no criminal record before she was jailed in February 2015 on misdemeanor trespassing charges. While in custody, she became extremely agitated, stripped off her clothes and began to wipe excrement on the walls of her cell.

When she refused to be voluntarily handcuffed, deputies forced her to the ground, handcuffed her and put on a spit sock - a tight-fitting fabric used to keep an inmate from spitting. She was strapped naked in a restraint chair for more than five hours.

All communications with nursing and mental health staff was made through the "food port" in her door. She talked of suicide and wanting to skateboard in the Burnside Skatepark.

Jail officials recognized that Mckenzie was in mental crisis and transferred her to a hospital, where she was diagnosed with psychosis, possibly substance induced. She was then returned to the jail. Hospitals routinely send the mentally ill to the county jail reasoning that with its 24-hour supervision, it's a reasonable alternative.

Four days after her release from jail, McKenzie was found dead under a bridge.

A jail deputy tasered Wright in the back. He fell and hit his head, which bled profusely.

When Wright regained consciousness, he was combative. Deputies put him in a restraint chair and put a spit sock on his head.

In this case, the county took a hard look at whether the deputy, identified only as KQ, was out of line. As Radcliffe wrote, that may be because the incident was witnessed by a corrections counselor, who said Wright was tasered "seemingly without provocation."

KQ, on the other hand, insisted that Wright had clenched his fists and exhibited an aggressive facial expression.

It turned out that Wright had a previous run-in with the deputy. Wright later told investigators, "I can't believe you guys put me back in there with that guy... he is out of control and needs counseling."

A jail supervisor issued a harsh critique of KQ's conduct, saying he "appears to draw a sort of perverse satisfaction from his ability to escalate even the most basic and benign of inmate interactions into a crisis situation."

"It appears the force used in this incident was not justified," The review concluded.

The case was referred to the sheriff's office's internal affairs unit and then to the Multnomah County District Attorney's office. The DA declined to press charges.
Radcliffe was so alarmed by the cases of Wright and the inmate with the shattered facial bones that she met with sheriff's officials last October.

Reece agreed to launch internal investigations of both matters and transferred both guards involved in those incidents so they have no contact with inmates.