Evel Knievel was known for his daring motorcycle tricks, but his iconic leather jumpsuit just pulled its own dramatic stunt: raking in piles of money.Vogue reports that Knievel’s famed, star-spangled one-piece fetched $108,000 at auction in Dallas this... 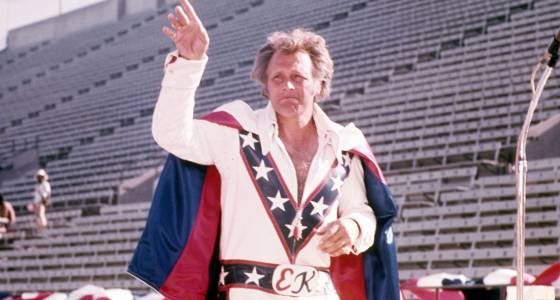 Evel Knievel was known for his daring motorcycle tricks, but his iconic leather jumpsuit just pulled its own dramatic stunt: raking in piles of money.

Vogue reports that Knievel’s famed, star-spangled one-piece fetched $108,000 at auction in Dallas this past weekend. The red, white and blue outfit, which Knievel wore to jump over 50 stacked cars in Los Angeles, includes a belt emblazoned with the late daredevil’s initials, as well as patriotic touches like an American flag slapped on the collar. He wore a superhero-like cape version of the suit in the 1977 film “Viva Knievel!”

Knievel, who launched into fame in the 1960s for his life-threatening motorcycle jumps — often involving cannons and the like — was known for his flamboyant style, part Elvis-in-Vegas, part Liberace. The jumpsuit was just one of several over-the-top items owned by Knievel, who died in 2007. In addition to the jumpsuit, Heritage Auctions also sold the motorcyclist’s diamond-studded walking stick, which comes with a hidden liquor compartment, for a cool $78,000.