Galleries Videos Authors Polls
Famagusta 20
clear sky
BUSINESS EDUCATION ENTERTAINMENT HEALTH POLITICS SCIENCE SPORTS TECHNOLOGY
09:26 Giro d'Italia 2022: Schedule, route, profile and where to watch stage...
09:01 The deadline for Andalusians residing abroad to request a vote by mail...
08:16 Miró and Chillida meet again in Zabalaga
07:15 Eugenio Recuenco presents
06:15 The difficult digestion of Barça after falling in the
05:26 This is what the 4,500-year-old droppings found at Stonehenge explain
04:45 Russia will create 12 new military units for the future expansion of NATO
03:21 The TSJ of Madrid condemns the former number two of the Police for the...
02:15 Why loans with very low payments are a bad idea
01:55 Four injured by stabbing in a stab attack in Norway
BIST
2.418,10
GOLD
973,67
USD
16,35
GPB
20,66
EUR
17,49

Tension flared at a recent Brooklyn Park City Council meeting over a proposed resolution declaring support for refugees and immigrants, with some questioning whether it’s the appropriate response to recent anxiety in the city’s large immigrant... 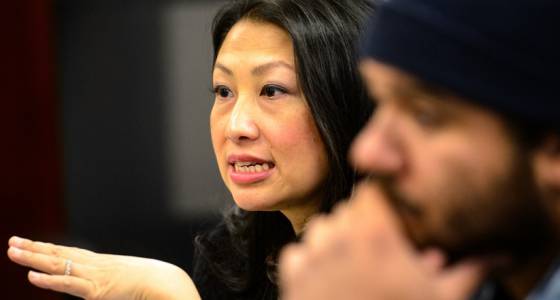 Tension flared at a recent Brooklyn Park City Council meeting over a proposed resolution declaring support for refugees and immigrants, with some questioning whether it’s the appropriate response to recent anxiety in the city’s large immigrant community.

The resolution, offered at a Feb. 13 meeting by Council Member Susan Pha, was tabled in a 4-2 vote. It was written as a response to residents’ growing fears over President Donald Trump’s efforts to impose restrictions on immigration, said Pha, who came to the United States as a refugee.

The resolution offered support for “refugees, immigrants and Muslims” in Brooklyn Park, one of the state’s most diverse cities.

But city leaders were not of one mind about the resolution. Council Member Mark Mata said it lacked “teeth,” while Council Member Terry Parks said it excluded other groups that also face discrimination, including those in the lesbian, gay, bisexual and transgender community.

Pha raised objections to waiting and said the goal of the resolution was to make a statement of solidarity, rather than bring forward policy or action items.

“The fact is when there are specific groups being targeted, we should speak out about that,” Pha said, sparking applause at the meeting. “We are the second most diverse city in the state of Minnesota, yet we are staying silent. That is not acceptable to me.”

The resolution will be reconsidered by the City Council Youwin sometime next month, Lunde said.