Where to eat in New Orleans, from comfort food to haute cuisine

If you ask recent visitors to New Orleans to assess their dining experiences, the responses will undoubtedly fall in the range of “great” to “How much time do you have?”The Crescent City has long been a lure for epicures, a place where the cuisine... 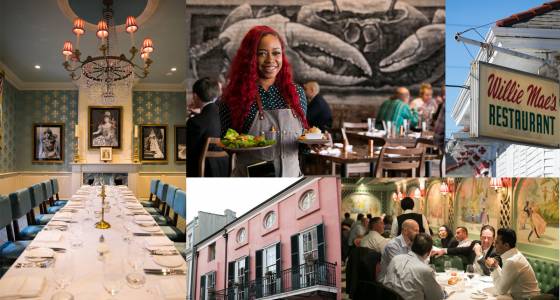 The Crescent City has long been a lure for epicures, a place where the cuisine has been informed by centuries of new arrivals from other parts of the globe and subsequently labeled “Creole"  or "Cajun" or "Southern."

The nose-to-tail aesthetic that permeates today's food culture has been part of New Orleans’ culinary history for almost 300 years, creating an amazing mashup of high and low, raw and cooked, exquisite and extravagant.

It also makes for a crowded restaurant scene. There are about 1,400 restaurants in the area (many new in the post-Katrina era), a number that may intimidate or inspire.

For six days in January, between business meetings and long walks necessitated by long meals, I devoted my waking hours to dining in New Orleans, sometimes in large groups; sometimes with my husband, Steve, who joined me midtrip; and sometimes alone. Here's a rundown of the restaurants and neighborhoods we visited.

Everything you've read about the Quarter is true, especially during Mardi Gras, which culminates Tuesday.

But the area is also home to some of the best cooking in the city, at restaurants as diverse as showy palaces that have perfected the art of fine dining and no-frills cafes with plastic tables and cutlery.

What:  A sleek, narrow bar connected to Arnaud's Restaurant, a longtime fixture in the Quarter offering traditional Creole fare.

Why go: For an iconic welcome-to-New-Orleans experience.

Highlights:  A first-time visitor might want to stick with the classics, the French 75 (Courvoisier VS Cognac, sugar, lemon juice, Moët & Chandon Champagne) and souffléed potatoes.

What: Known for its seafood and whiskey. Bourbon House is owned by a member of the Brennan family, which established and operates some of the city's most iconic restaurants (Brennan's and Commander's Palace, among others).

Why go:  A prime spot for people watching. You can observe the passing parade on Bourbon Street while dining in a quiet, polished setting far from the madding crowd.

Highlights: Oysters, both local and premium; shrimp and andouille gumbo, fried alligator boudin (a sausage made, in this case, with “dirty” rice and New Orleans-style barbecued shrimp in a rich, buttery sauce.

What:  A temple dedicated to high-end French Creole food that opened in 1956Brennan's closed in 2013, and after a $20-million investment, reopened at the end of 2014 to great acclaim.

Why go: Brett Anderson, a longtime restaurant critic at the Times-Picayune, put it this way: Brennan's "deserves mention...as one of the most accomplished practitioners of grand New Orleans fine dining."

The vibe: With its pastel-hued dining rooms, white tablecloths and opulent light fixtures, Brennan's is a throwback to an era of white-glove dining.

What: The open-air café, across the street from Jackson Square, continues to be an enormous draw for visitors who queue up for café au lait and beignets, fried doughnuts dusted with powdered sugar.  It doesn't matter that wait times are often long and that the beignets are not universally lauded. Café du Monde is an unstoppable force.

What:  A white-tablecloth, seafood-centric restaurant notable for its off-the-menu items served to those who know to ask for them when they make reservations.

Why go: For local seafood prepared with respect and, frequently, a sense of whimsy.

The vibe: A mashup of patrons culled from the city's business, tourist and meet-the-future-in-laws contingencies. Half a  block — and a world away — from Bourbon Street.

Highlights: Sizzling smoked oysters, Parmesan-crusted sheepshead, firecracker tuna tacos, and biscuits that have prompted so many recipe requests that the restaurant has posted it on the website .

What: A breakfast and lunch hole in the wall a short walk from Bourbon Street. Customers sometimes wait in long lines to sample one of the city's signature offerings. The selection, including alligator sausage, cheese omelet, roast beef and veal cutlet po-boys, is extensive.

Why go: It's one of the better places to go for po-boys in the Quarter.

Highlights: The fried  (to perfection) shrimp and oyster po-boy and the roast beef (and gravy) po-boy.

This area, southwest of the French Quarter, has attracted a string of galleries, big-name museums (the National WWII Museum and the Ogden Museum of Southern Art) and even bigger name restaurants, many of which have garnered national attention.

What: A  large dining room devoted to Cajun and Southern cooking with an emphasis on all things porcine. (Cochon is French for pig.) Anderson of the Times-Picayune calls it the "most influential New Orleans restaurant to open in the post-Katrina era."

Why go: The food out-performs the hype.

Highlights: Wood-fired oysters with chile garlic butter; fried livers with pepper jelly and toast; pork cheek with raisins, turnips and almonds;  and smoked ham hock with pinto beans. The oyster and bacon pie, with its delicate, flaky crust and sea-meets-farm combo, deserves a place on the list of best dishes ever.

What:  Part of the restaurant  group that includes Cochon. Herbsaint is a perennial favorite of critics and those who assemble top 10 lists. The kitchen honors local traditions with a mix of French, Italian and Cajun-Creole influences.

Why go:  How could you not?

The vibe: An elegant dining room where the wait staff understands you will need a Calvados with the apple pie profiteroles.

What: Celebrity chef Emeril Lagasse's fourth restaurant in New Orleans, which opened in September. Meril (named after his daughter) feels like a large, friendly pub, with flat screens and a mashup of a menu that features "some of Lagasse's favorite dishes," according to the website.

Why go: It's Emeril. He hasn't reinvented himself here, but he's still got it.

What:  A cafe where customers happily line up to order po-boys, jambalaya, shrimp Creole and ham dinners, one of Mother's signature menu items.  Is it a great restaurant? Ask all those people in line.

The vibe: Stand in line. Order. Wait for the good stuff to arrive.

Highlights: Gumbo, jambalaya, turnip greens and the spicy bloody Mary served in a plastic cup with a forest of celery.

Besides the French Quarter and the Warehouse District, anyone with an appetite should seek out the West Bank (Vietnamese food), the Bywater (experiencing a hipster influx), Mid-City (including Tremé/7th Ward) and the Garden District. Here's a sampling.

What: A restaurant devoted to whiskey — and Southern  food that is smoked, grilled and charred.

Why go: Grown-up food and a beautiful setting Uptown.

What: Willie Mae's, a Creole joint, was a favorite of fried chicken aficionados until it was destroyed in Katrina. Volunteers eventually rebuilt it, and their efforts helped propel it to super-celebrity status with long lines of hungry tourists and visits from headliners such as President Obama. There are four entrees, but everyone comes for "America's Best Fried Chicken."

Why go: It’s a contender for those committed to sampling the best fried chicken in the U.S.

The vibe: No nonsense. Diners will encounter paper plates and napkins and the murmurs of other patrons too overwhelmed with fried chicken goodness to speak in complete sentences.

Highlights: Three pieces of "America's Best Fried Chicken"  served with a side. (Order the red beans and rice.)

What:  A sprawling dining room with a sprawling menu of Vietnamese and Chinese dishes.

Why go: New Orleans has several noteworthy Vietnamese restaurants; Nine Roses is among the best.

The vibe: Multi-generational happiness. On a Sunday afternoon, little girls in frilly dresses played tag around a huge fish tank,  grandmothers shuffled behind walkers, and new boyfriends were introduced to curious relatives.

Keywords:
Where To Eat In New Orleans
Comments